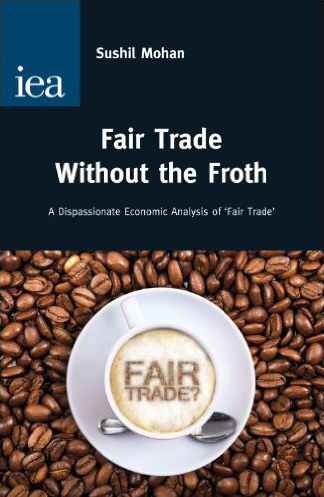 Fair Trade Without the Froth
A Dispassionate Economic Analysis of “Fair Trade”
Sushil Mohan
Paperback
This book review appeared in the Fall 2011 issue of The Independent Review.

If you walk down the coffee aisle of your local Whole Foods Market, you will find a dizzying array of whole-bean and ground coffees from around the world. You will also discover that these products sport a bewildering variety of labels that identify them as “Organic,” “Rainforest Alliance,” “Utz Certified” (and no, that’s not the purveyor of potato chips), “Fair Trade,” and “Smithsonian Bird FriendlyW.” Some coffees have multiple labels to indicate that producers and retailers were cognizant of and sensitive to the needs of our fine-feather friends while also being concerned with the development of “sustainable value chains.” Isn’t the market wonderful?

Such is the basic message of Sushil Mohan’s book Fair Trade Without the Froth: A Dispassionate Economic Analysis of “Fair Trade,” a thoughtful, balanced, and, yes, dispassionate discussion of the claims of fair-trade advocates and critics. Mohan effectively argues that the fair-trade movement is a market-driven response to some consumers’ demands for products that provide them with a set of benefits.

As long as consumers see some value in voluntarily exchanging a portion of their income for a fair-trade product or for a product with one of the other certifications, no one is worse off; the market has once again provided. Rather than see fair trade as an aberration that distorts markets, Mohan sees it as a small part of the rich diversity that a free-trade system encourages.

And this segment of the market is increasingly diverse. Demand for fair-trade goods continues to expand, as does the variety of goods being certified. We learn that coffee remains the most valuable product in the fair-trade stable (bananas are second), but tea, rice, cosmetics, and handicrafts may also be certified. This market is expanding because consumers want these goods.

Take coffee as an example. It is not news to point out that Americans are worlds away from the experience of the 1970s and 1980s, when almost all of us drank coffee that came out of a big blue can or a big red can. Today we confront an embarrassment of riches. If you prefer to spend less and like the taste, you can buy a 33.9-ounce container of Folger’s Classic Roast Medium Coffee for $9.59 ($0.28 per ounce). However, if your palate is more refined or you want to impress your sweetheart, you might be willing to spend considerably more. You may be looking for something like the Jagong coffee from Sumatra that is the monthly feature at my local coffee shop. Offered by retailer Counter Culture, Jagong is “Counter Culture Direct Trade Certified,” “Certified Organic,” and “Shade Grown.” Selling at $10.75 for a 12-ounce bag ($0.89 per ounce), it is a pricey cup of java, but certainly not the most expensive.

Think of fair-trade products as a type of luxury good. Many people consume luxury goods in order to signal their fabulousness to others. Fair-trade consumers have their own sense of what fabulousness entails: a firm commitment to conservation, poverty alleviation, and the empowerment of developing-world producers—or maybe they simply like the labels. Whatever motivates them, be it commitment to a cause or love of the bo-ho lifestyle, growing numbers of consumers now choose among a growing variety of “socially conscious” products.

Mohan does a good job in discussing the various alternatives to fair trade that now exist. This competition is a response to the perceived weaknesses of the fair-trade system itself—that the certification process imposes substantial costs on poor producers and that it is not the best way to create direct relations between retailer and producer. It is also a direct response to consumer demand: I may value protection of the rain forest; you may value birds. Our purchases reflect our preferences, and retailers and producers cater to our preferences.

For example, although Whole Foods sells fair-trade coffee, the company has developed an alternative “Whole Trade” brand that cuts out the fair-trade certification process, replacing it with a Whole Foods process. In most ways, the two are similar: Whole Foods pays producers a premium, works with producers who provide what the company sees as good job conditions, and supports environmentally beneficial actions; but by taking the fair-trade middlemen out of the picture, Whole Foods deals with these concerns at a lower cost. More such alternatives are springing up all the time. Whether these standards eventually converge into one mega–“socially conscious” brand remains to be seen. For now, though, fair trade competes with other approaches to grab consumers’ attention.

Why are consumers drawn to the fair-trade approach? Some them seem to “buy” the fair-trade hypothesis: by spending a little more, they help poor producers earn more. As the World Fair Trade Organization puts it, “Fair Trade is fundamentally a response to the failure of conventional trade to deliver sustainable livelihoods and development opportunities to people in the poorest countries in the world” (qtd. on p. 103). Fair trade is “fair,” according to its advocates, because it helps to overcome the hardships, inequities, and exploitation inherent in the “free” market. Fair trade claims that it provides poor producers tangible benefits in the form of higher income, a better work environment, and support in bargaining with buyers.

The accuracy of these claims is another matter. In the strongest section of the book, Mohan identifies the various claims that fair-trade advocates make and examines the evidence for and against them. He notes: “Fair Trade’s proponents try to convey the impression that almost all the price premium they are paying for Fair Trade products is passed on to the producer, while the reality is very different” (p. 52). Unfortunately, the transaction costs associated with the certification process, exporting, marketing, and retailing eat substantially into any benefits producers might receive. Empirical evidence on this point is limited, but it seems that even in the most generous scenario fair-trade producers retain only 25 percent of the price premium; most probably retain significantly less.

Mohan rejects the claim that fair trade gives producers a guaranteed income that helps them avoid the volatility of commodity markets. Unless producers are guaranteed to sell a particular quantity, they have no meaningful income guarantee. Fair trade guarantees a price to be paid, not an amount to be purchased. As prices for fair-trade goods rise, buyers are free to look for less-expensive producers. So, contrary to claims, it is not fair trade per se that guarantees producers a steady income; only consumers can do so.

Mohan also considers the claims made by critics of fair trade. For example, some critics of the movement feel that fair trade gives producers incentives to overproduce because of the price premium they may earn, which may hurt other producers. This claim, Mohan points out, is probably overblown because demand for fair-trade products, though growing, remains relatively small. Most fair-trade producers sell only 10 percent to 30 percent of their inventory at fair-trade prices, not 100 percent. Therefore, fair trade may not drive overproduction.

Critics also argue that fair trade in fact does not support the poorest of poor farmers. Most fair-trade products come from Latin American, not from Asia or Africa, which means that fair trade is helping relatively better-off Latinos. His argument here might have focused more on the role that increasing competition from specialty coffee plays in raising prices for producers in Africa and Asia (recall Jagong coffee as an example). Specialty coffee is not necessarily fair trade. Instead, high-quality coffee sells for a premium normally greater than the fair-trade premium. As more developing- world producers build capacity to sell in this expanding market, concerns that fair trade has a noticeable negative impact on non-Latin producers are allayed.

Mohan concludes the book with a section on fair trade as a long-term development strategy. The takeaway here is that despite the claims made by advocates of fair trade, any good these voluntary efforts accomplish is tiny compared to the good that would be done if developing countries improved their institutional environment and if agricultural subsidies and tariffs were removed so that trade in commodities really were free. If developing countries made it easier to do business, and if they protected property and created impartial courts that enforced contracts, poor farmers would have better opportunities to move out of farming. If the United States and Europe would get rid of tariffs that raise the costs of importing products, poor farmers would be able to compete better with vastly wealthier developed-world farmers. Mohan rightly points out that if fair trade’s goal is to improve the lot of poor farmers, “there are other, often more efficient mechanisms for achieving this objective” (p. 109). In the end, a strong and diversified market is likely to do much more good for the world’s poor commodity producers than is the fair-trade movement.