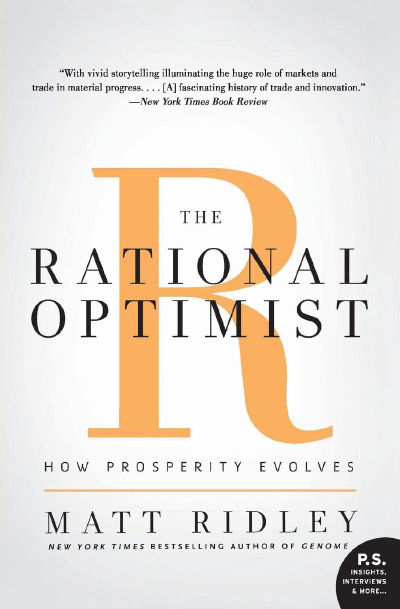 Matt Ridley is an excellent science writer who has worn many hats, including those of a scientific researcher (he holds an Oxford doctorate in zoology), a journalist (writer and editor for The Economist), a bank chairman (nonexecutive), and a venture capitalist. His previous books explain the many striking similarities between human beings and other species. In The Rational Optimist: How Prosperity Evolves, he turns to explaining the differences that allow mankind to increase and prosper far beyond the potential of its closest genetic relatives. This book is a tale of natural history and of the rise and decline of human civilizations as viewed through the spectacles of Charles Darwin and Adam Smith and with the ebullient rational optimism of the late economist Julian Simon.

Economists and biologists often attribute mankind’s prosperity to a genetic propensity for “reciprocal altruism”: individuals’ willingness and desire to cooperate, reciprocate, and trust. Other species are similarly predisposed. The essential distinction is mankind’s unique ability to reciprocate not only identical goods, as apes and monkeys swap groomings, but also to exchange dissimilar goods—what Smith famously identified as the “propensity to truck, barter, and exchange one thing for another” (Wealth of Nations, bk. I, chap. II). Exchange uniquely enables individuals to profit through specialization, division of labor, and comparative advantage. Ridley’s theme is that “there was a point in human prehistory when big-brained, cultural, learning people for the first time began to exchange things with each other, and that once they started doing so, culture suddenly became cumulative, and the great headlong experiment of human economic ‘progress’ began. Exchange is to cultural evolution as sex is to biological evolution” (p. 7), and its consequences are huge.

The consilience between economics and evolution is taken for granted nowadays, owing in large part to work by the distinguished evolution theorist (and Ridley’s academic mentor) Richard Dawkins. Dawkins’s path-breaking book The Selfish Gene (1976) piqued economists’ interest in the nexus between competition and evolutionary development; his later book The Blind Watchmaker (1996) deepened economists’ interest in F. A. Hayek’s ideas about spontaneous organization’s ability to outperform intentional design and centralized planning. Credit is also due the economists Richard Nelson and Sidney Winter, whose insightful book An Evolutionary Theory of Economic Change (1982) encouraged economists to recognize evolutionary effects in many economic phenomena.

Ridley’s argument avoids the usual tropes about the natural selection of genes and survival of the fittest. His focus falls instead on the natural selection of ideas—of cultural evolution that progresses through the units of imitation and replication that Dawkins, writing in 1976, termed “memes.” These amorphous units of thought are brought together by the exchange process, enabling them to evolve spontaneously into the complex behaviors and discoveries that underlie human prosperity.

Genes play a role, of course. Efforts to teach our closest relation, the chimpanzee, to exchange things of lesser subjective value for other things of greater value, as humans do, have been unsuccessful (p. 59). Even Neanderthals, whose brain volume exceeded modern man’s, evidently remained largely self-sufficient, never happening on specialization and exchange even though evolution itself did so, as the collaboration between alga and fungus to form lichen attests (p. 75).

Ridley does not identify specifically the mechanism that sets mankind apart from other species, a reticence attributable perhaps to an abundance of scientific caution. Nevertheless, his emphasis on the role of trust (an element of reciprocal altruism) and oxytocin (trust’s biochemical, neuropeptide driver) is telling. Oxytocin affects the amygdala, a midbrain structure that modulates emotion and fear and so enables trust, choice, and exchange. These ingredients exist to varying degrees in all mammals. Ridley suggests, therefore, that mankind has evolved “a particular sensitivity to oxytocin systems” (p. 97), thus enabling its unique propensity for exchange.

Ridley argues that exchange not only caused the human species to expand “in ten thousand years from less than ten million to nearly 10 billion people” (p. 12) but also enabled succeeding generations to live increasingly prosperous lives. Periodic retreats from specialization and exchange into self-sufficiency, as occurred most conspicuously during the Dark Ages, are conversely shown to be associated with population crashes and reduced living standards.

Misery abounds in the world despite the remarkable propensity for exchange. Ridley lays much of the blame for this condition at the feet of governments, which he characterizes as being insufficiently symbiotic and overly predatory, tending always “to be good things at first and bad things the longer they last” (p. 182). In a previous book, The Origins of Virtue: Human Instincts and the Evolution of Cooperation (New York: Penguin, 1997), he argues that mankind’s biological inheritance generates a lingering propensity for a “parasitism of reciprocity”— a once-useful intolerance of and punitive propensity toward stinginess, which evolved to police a system of reciprocity by predisposing individuals to extort a “fair share” of others’ good fortune (pp. 123–24). Ridley does not reprise this point in so many words in The Rational Optimist, although it pertains to his present observation about parasitism being responsible for “starting wars, demanding obedience, building bureaucracies, committing frauds, [and] preaching schisms” (p. 352). Such biologically rooted behavior potentially poses an upper limit on mankind’s capacity to prosper through exchange, although, as Dawkins argued in 1976, the capacity for reason enables us to rise consciously above the dictates of our selfish and outdated genetic programming.

The eradication of avoidable misery is a sufficient reason for mankind to foster exchange (what Hayek termed “catallaxy”) to the fullest extent. But, as Ridley notes, “[t]his catallaxy will not go smoothly, or without resistance. Natural and unnatural disasters will still happen. Governments will bail out big corporations and big bureaucracies, hand them special favors such as subsidies or carbon rations and regulate them in a way as to create barriers to entry, slowing down creative destruction. Chiefs, priests, thieves, financiers, consultants and others will appear on all sides, feeding off the surplus generated by exchange and specialization, diverting the lifeblood of the catallaxy into their own reactionary lives” (pp. 356–57). Ridley nevertheless remains rationally and unrepentantly optimistic about mankind’s future, which makes his new book a thoroughly worthwhile and enjoyable read.

James A. Montanye
Falls Church, Virginia
Economic History and DevelopmentEconomyLabor and Employment
Subscribe Buy This Issue Get the App