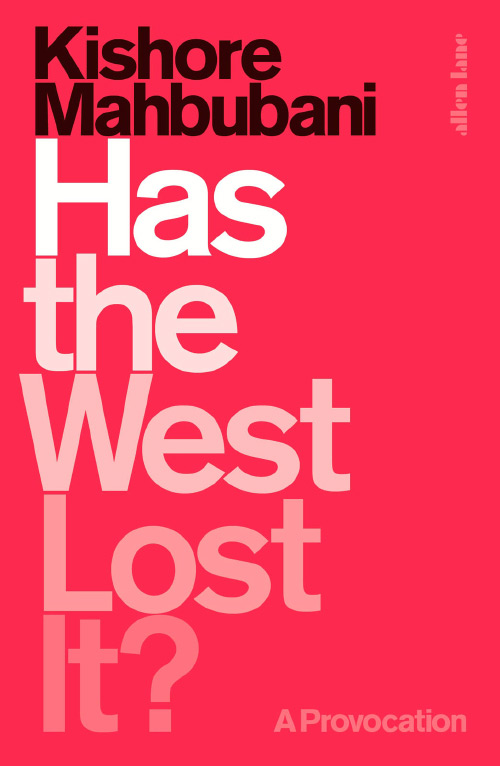 Has the West Lost It?
Kishore Mahbubani
Kindle Hardcover Paperback Audiobook
This book review is a web exclusive for the Summer 2020 issue of The Independent Review.

Diplomat and dean of a public policy school, Kishore Mahbubani issues a friendly wakeup call from the East, where there is pervasive dismay over the West’s attitudes toward global change. History has taken a big turn, he cautions, but it is not the turn Western intellectuals have been trumpeting.

Instead of the “end of history,” there is the rebalancing of history, with the West’s share of world GDP being reduced to its historic share. A great correction is taking place, “the recent period of Western relative over-performance against other civilizations...a major historical aberration” is coming to its natural end (p. 3). China and India are regaining their natural share of world GDP. The West could aspire to cope and even benefit if only its leaders would adjust their actions according to the spirit of a changing world.

Global trends contributing toward improving the human condition have never been more positive. One of the reasons “the rest” are doing so well is the power of reason. The gift the West gave the world and the application of the scientific method to solving problems is increasingly accepted as a global norm. So what prevents the West from taking joy from the new global opportunities or in the fact that humankind has never enjoyed better conditions, he asks?

The answer he tells us can be attributed the strategic miscalculations of Western intellectuals, their misreading of history, and their alienation from the fate of their own working classes. When the Cold War ended, both U.S. and European intellectuals became comfortable with their unrivaled good fortune, complacent in the belief that the Western style of governance was the peak of human achievement and that only two global powers remained, both democratic and liberal, the United States and Europe.

They have yet to grasp that there was something to learn from the strategies of others, such as the East Asian institutional reforms that enhance a government’s ability to improve people’s lives. The region has enjoyed good governance by emphasizing functional government via civil service reform and meritocracy. Chinese leaders, beginning with Deng, saw what East Asia had accomplished and have focused on improving living conditions; lifting almost a billion people out of poverty has changed the social contract.

While populations in East Asia learned to expect more from their governments, in the West, we have come to expect less. In the U.S., working families that have had their lives disrupted and their incomes stagnate have no reason to believe government seeks to meet their needs. Between 1973 and 2015, when productivity increased by 73 percent, their wealth and their jobs vanished abroad, but the pay of CEOs skyrocketed. No wonder democratic polities in the West face polarization.

The global economic pie is not shrinking, it’s growing. The East’s approach has been premised to a far greater extent than the West’s on sharing that growth. Western intellectuals have yet to grasp that there can be political and social transformation in nondemocratic countries, making the messianic impulse to spread democracy at any cost seem unreasonable to Asians who see democratically elected governments fail to address their citizens’ basic needs.

The West in fact could hitch its wagons to the rest, but instead it is engaging in futile wars, attacking Iraq and Syria, and baiting China. Why this obsession with war, Muhbabani asks, when the prospects of a major global conflict are lower than they have ever been, the number of deaths from interstate wars has steadily fallen? War itself, he ventures, might be obsolete.

The Western elites’ mistaken views of global trends have led to strategic errors driven by hubris and miscalculation. Perhaps the greatest error was to be distracted by Bin Laden, he writes. The efforts to create a democracy in Iraq gave Iran a strategic advantage in the Middle East, causing yet further distraction from productive engagements.

Finally, if we think that the main threats to world order are nontraditional violence, threats from nonstate actors, surges of migration, fundamentalism, and zones that are without government, then who—China or the West—is making the greater contribution to global stability? Will it be the trillions wasted in wars in Iraq and Afghanistan, or China’s Belt and Road initiative? Which of these creates more disruption, migration, and fundamentalism, and more support for violent solutions to global issues? What has the West achieved by bombing a population that is growing twice as fast as the overall world population, making itself an enemy of two billion Muslims?

No wonder many Asians increasingly question the global leadership of the West and instead see the U.S. as one of the main sources of disorder.

Ironically, Mahbubani chides, China should designate Bin Laden a national hero. Next to Mao and Deng, he has been China’s great benefactor by distracting the U.S. and thus allowing China the room to grow and surpass the U.S. economy in purchasing power parity (PPP) terms.

There is a further miscalculation to consider. The U.S. misunderstands China’s relationship with Europe. China’s strength can help Europe with its most pressing strategic vulnerability: stability and prosperity in the Middle East. Prosperity there will keep migrants away and prevent populist parties from gaining political control at home. How will Europe deal with another great danger it is facing, Africa’s demographic explosion? Again, China’s resources are needed. America’s warnings about frequenting Huawei risk further rifts with Europe, highlighting geopolitical differences based on geography that might bring Europe closer to China, despite a shared cultural heritage with the North America.

Here is the advice Mahbubani gives to the U.S. The more you spend on military deployments in East Asia, the more you will be prevented from dealing with the real challenge of China—its economy. One way he suggests America can adapt to its new position in the world is to assure China that a united Korea will be neutral. What could be more forward looking than putting a fiercely independent country at China’s doorstep?

One can quibble with Mahbubani about the timing of the great divergence of East and West, about the importance of human rights and democracy for long-term economic growth, but there is much valuable wisdom here. It is election time in the U.S. and Mahbubani’s ideas could help set a new course for relations with economies whose combined share of global GDP is destined to surpass that of the West. There is no reason to feel lost Mahbubani counsels—opportunities yet to be explored await once we learn “to accept or adapt to this new historical era” (p. 3).