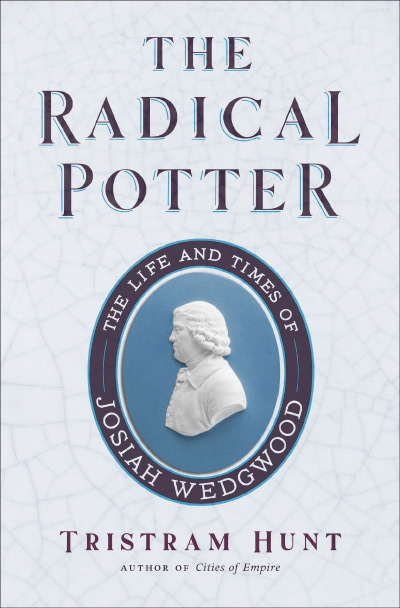 The Radical Potter
The Life and Times of Josiah Wedgwood
By Tristram Hunt
Kindle Hardcover Paperback Audiobook
This book review is a web exclusive for the Fall 2022 issue of The Independent Review.

I greatly enjoyed reading, and I strongly recommend, this book, not only as a well-written biography of a notable entrepreneur and industrialist of the eighteenth century, but for its well-informed account of how a man of the Enlightenment took advantage of the Industrious Revolution and the rise of consumerism, and was a participant in the pan-European Industrial Enlightenment, and the Industrial Revolution that began in Britain in the late eighteenth century, and an observer of, and a contributor to, the emergent national identity of Britain and the eventual abolition of slavery. It is noteworthy that the subtitle of the UK edition is “Josiah Wedgwood and the Transformation of Britain.” Tristram Hunt has written several well-received books in history and biography prior to this volume, and he was the Labour Member of Parliament for Stoke-on-Trent, the home of Wedgwood’s potteries, from 2010 until 2017. In the latter year he was appointed as director of the Victorian and Albert Museum in London, which holds the Wedgwood collection.

My first piece of advice when reading this book is to begin with the introduction. As the author explains (p. xxiv):

The life and afterlife of Josiah Wedgwood speaks to audiences which are local, national and global....He represents an age of British commercial and cultural confidence as well as an industrial economy of local production and proud skills....[I seek] to help more people understand the centrality of Josiah Wedgwood, as both a man and a commercial pioneer, in the annals of global design and the transformation of Britain.

Josiah Wedgwood was the twelfth and last child of Thomas and Mary Wedgwood, a family of potters who lived in Burslem, Staffordshire. This large family exemplified the rapidly expanding population (and high child mortality) of eighteenth-century England. Josiah was born in 1730 and contracted smallpox in 1742, which left Josiah with a permanently weakened knee that made him unable to work the foot pedal of a potter's wheel. This encouraged him toward experimenting on new materials and manufacturing techniques and designing pottery rather than making the artefacts himself. In 1768 his leg just below the right knee was amputated and he soon had a peg leg custom made that earned him the sobriquet “Owd Wooden Leg” among his workers. That said, Josiah Wedgwood had a happy marriage to Sarah, whom he called Sally, and they had six children who lived to adulthood. Around 1762 he first met his business partner, Thomas Bentley (1731–1780). Bentley was a Nonconformist, and as a young man he was an outspoken opponent of slavery. “Wedgwood was immediately entranced by Bentley—his charm, grace, urbanity, culture, dissenting conviction and political radicalism” (p. 54). From all accounts, they made a very successful business partnership that began in 1768 and was dissolved only to compensate the grieving Mrs. Bentley. Each man played to his strengths to ensure the success of the business. “It was...one of the most pioneering businesses in British economic history” (p. 80). Such is the verdict of the author of this book.

As a university instructor in both economic history and the history of economic thought, I particularly appreciated the author’s explanation of the revolutions in thought and practice that characterized eighteenth-century England. Decades before Wedgwood was born the Industrious Revolution and the Consumer Revolution had begun, first in the Netherlands and then England, and had spread to other parts of northwestern Europe. In a 1994 article, and later in a 2008 book (The Industrious Revolution: Consumer Behavior and the Household Economy, 1650 to the Present, New York: Cambridge University Press), the noted Dutch economic historian Jan de Vries used the concept of an industrious revolution in the context of European history to describe an increase in the hours of labor (and a reduction of leisure time) that began in the late seventeenth century and continued into the nineteenth century as people came to value monetary income relatively more highly than leisure. Money enabled them to move away from goods and services that households produced for themselves and to enjoy new marketable goods like imports of tea, coffee, sugar, and tobacco, and domestically produced manufactures like pocket-watches (the consumer revolution). This was the world into which Josiah Wedgwood was born and in which he prospered.

Joel Mokyr coined the concept of the industrial enlightenment to describe what had begun by the late seventeenth century and that gathered pace during the eighteenth century. Hunt details the fascinating story of how Wedgwood was a quintessential exemplar of the emerging scientific culture of rational inquiry into the laws of nature as he sought to create and perfect new ceramics to appeal to consumers and to use new processes and much extended division of labor to reduce manufacturing costs.

What is also noteworthy is how he and his partner Thomas Bentley participated in the creation of the Trent and Mersey Canal that linked his factory to the port of Liverpool, and brought clay from Dorset and Devon, and enormously facilitated the domestic and foreign distribution of the products of his ingenuity. And how they were also responsible for significant innovations in cost accountancy and retailing in London and abroad. “Fashion is infinitely superior to merit in many respects” observed Wedgwood on June 19, 1779 (emphasis in the original, p. 89).

Josiah Wedgwood’s beliefs and activities were not confined to business affairs. He was a Unitarian with the Nonconformist frame of mind; a relentlessly curious mind and a member of the Lunar Society, a group of free-thinking scientists and industrialists that included Joseph Priestley and James Watt; a patriot who celebrated the ancient liberties of the English people as represented in the emerging patriotism of eighteenth-century England; a democrat who celebrated the American Revolution and the Fall of the Bastille; a committed opponent of slavery; and a supporter of the Eden Agreement that lowered tariffs between Britain and France in 1786.

As with us all, there were ironies, some would say contradictions, in Wedgwood’s life and thinking. “Fired with enthusiasm for [Richard] Price, [Thomas] Paine, [Benjamin] Franklin and [Jean-Jacques] Rousseau it was only natural that Wedgwood should support the Thirteen Colonies battling for liberty and self-government against Prime Minister Lord North in the 1770s” (p. 208). He also enthusiastically supported the Fall of the Bastille in 1789 and took advantage of both events to sell crockery to customers in North America and France. Yet throughout his career he cultivated royalty and nobility in Britain and around the world, not least Russia, as rewarding markets for his goods. Tristram Hunt observes that “[t]he radicals [Wedgwood and Bentley] were smitten when in 1766 they met Charlotte of Mecklenburg-Strelitz, Queen of Great Britain and of Ireland, on the occasion of their audience with the King and Queen. On June 9, 1766, Josiah Wedgwood was appointed “Potter to Her Majesty,” which title he now assiduously publicized.

As you would expect, Wedgwood took advantage of the patent system to protect his inventions, and jealously guarded his intellectual property, and not only his patents. Yet, but not surprisingly, he also contested the claims of other inventors seeking to extend their own patents. And long before statutory protection for trademarks was introduced in the second half of the nineteenth century, Wedgwood sought to protect his trademarks.

“For the most part, Josiah Wedgwood publicly aligned himself with the free-trade, low-tax, low-regulation ethos of the Enlightenment political economists” (p. 216) and welcomed the 1786 Eden Agreement that reciprocally lowered customs duties between Britain and France, which offered him a new market for his manufactures in France. “But the principles of free trade would only be taken so far” (p. 219), and he was firmly opposed to the free importation of Chinese ceramics, and closer to home, Irish ceramics. “Unusually, he took the step of directly entering the political realm by assuming the chairmanship of the General Chamber of the Manufacturers of Great Britain, which was formed to lobby Parliamentarians against [William Pitt’s so-called Irish Resolutions] that sought to reduce [but not abolish] tariff barriers between Britain and Ireland” (p. 220). The lobbying was successful. “[Wedgwood] would only accept a zero-tariff deal, which would allow the Staffordshire earthenware producers and their advanced factories to crush any Irish competitors” (p. 220).

Josiah Wedgwood is rightly celebrated for his principled opposition to slavery and the slave trade. Of course, his profits were in part made by selling pottery to the nouveau riche who had prospered from the slave trade and slave plantations in the West Indies, and in part by selling pottery to the middle classes who consumed their slave-grown sugar and molasses, cocoa and coffee, using his crockery. We may acknowledge that irony and yet applaud Wedgwood for producing at his own expense, and providing a vital income stream for the abolitionist cause, the celebrated anti-slavery jasperware medallion with the words “Am I not a Man and a Brother?”

In summary, this book is not only a fascinating biography of one man who in no small way became a figure of historical importance but is also a splendid introduction to the amazing changes in belief and the economy that were transforming Britain during and after his lifetime.