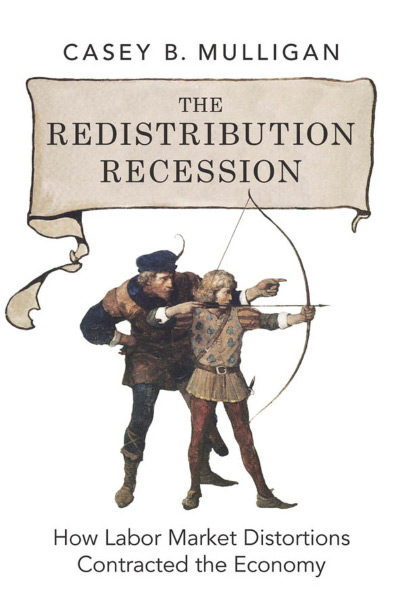 The Redistribution Recession
How Labor Market Distortions Contracted the Economy
Casey B. Mulligan
Kindle Hardcover
This book review appeared in the Fall 2013 issue of The Independent Review.

The Great Recession officially began in the fourth quarter of 2007 and ended in the third quarter of 2009. But more than three years later, despite massive federal stimulus spending focused on offsetting the decline in American workers’ labor earnings, employment rates are still substantially below pre-recession levels, as is the income of the average American. While unrepentant Keynesians such as Paul Krugman (End This Depression Now! [New York: Norton, 2012]) are writing polemics that continue to argue that our slow recovery is the result of stimulus spending that is insufficient to jump-start aggregate demand, Casey B. Mulligan, a professor of economics at the University of Chicago, argues the reverse in this tightly reasoned new book based primarily on his empirical research. He posits that government policies in 2008 and 2009, rather than mitigating the consequences of a recession triggered by the bursting of the housing-market bubble, turned it into the Great Recession.

In chapter 1, Mulligan poses two provocative questions: Would the U.S. recession have been deeper if the federal government had not intervened in financial markets and had not enhanced its safety nets for the unemployed and the poor? Or were the labor market declines amplified and prolonged by federal government actions? To answer these questions, Mulligan argues that it is necessary to identify empirically the factors that account for the 7 percent decline in employment and the 10 percent decline in hours worked for Americans between 2007 and 2009.

To do so in the context of microeconomic principals of macroeconomics, he first looks at the “fundamentals” that equilibrate supply and demand in the aggregate labor market—worker productivity, people’s willingness to work, labor income taxes, and labor market regulations—to account for this decline in employment before turning to the usual suspects outside this market according to Keynesian analysis— drops in investment, financial deleveraging, a “liquidity trap,” and consumer confidence. What Mulligan finds is a cautionary tale of the unintended consequences of government policy gone wrong.

In chapter 2, he develops and uses his labor market model with aggregate timeseries data on consumer spending, labor usage, productivity, and real wages. He finds that although employment was down and labor productivity up in all industries except for manufacturing, residential construction, and a handful of other businesses obviously experiencing declines in their relative demand, employers were increasingly using factors of production other than labor to produce their products. This empirical fact suggests that employment was dropping not only because of declining demand for the employees’ products, but also because employers were substituting capital and other factors for labor. This surprising finding suggests that although a decline in aggregate demand for goods and services was one of the reasons for the decline in labor, other causes were also at play in most sectors of the economy. This fact is consistent with an inward shift in the supply of labor to the marketplace during this period.

In chapter 3, Mulligan introduces the main culprit responsible for this supplycurve shift—the unintended consequences of increases in the social safety net that substantially increased the marginal tax rate on work. In his model, Mulligan operationalizes this force into changes in the replacement rate (the fraction of productivity that the average nonemployed person receives in the form of means-tested benefits) and the self-reliance rate (1 minus the replacement rate), which is the fraction of lost productivity not replaced by means-tested benefits.

His conjecture is that, in a reverse of government policies in the 1990s that made work pay for single mothers by transforming welfare as we knew it into a program that nudged single mothers off the Aid to Families with Dependent Children rolls and into the workforce, “temporary” government program expansions to mitigate the short-run consequences of unemployment and the bursting of the housing bubble made a prolonged paid period of nonwork an offer that many Americans found too tempting to refuse.

Mulligan identifies and incorporates the major expansions in eligibility and benefit amounts for Unemployment Insurance and food stamps into an eligibility index that shows that most of the 199 percent growth in these programs between 2007 and 2009 was due to these changes. He uses this growth rate in a weighted index of overall statutory safety-net generosity to determine the degree to which it has influenced overall employment. He does a similar analysis of the means-tested Home Affordable Modification Program (HAMP), which facilitated substantial lender-provided discounts on home mortgage expenses for unemployment insurance–eligible workers. He finds that these market distortions that increased the marginal tax on work grew substantially in 2008, peaked in 2009—at almost triple their 2007 level—and then modestly fell in 2010 to a level appreciably above the 2007 level.

In chapter 4 and then again in much more mathematical detail in chapter 5, Mulligan simulates the degree to which increases in the marginal tax on work implicit in the social safety-net expansions documented in chapter 3 account for the decline in employment and hours worked between 2007 and 2009. He concludes that at least half, and probably more, of the 10 percent drop in aggregate hours worked over this period would not have occurred or, at worse, would have been short-lived if the safety net had not been expanded.

Mulligan acknowledges that the bursting of the housing market bubble and the resultant drop in home values and in stock market values more generally caused labor hours to decline. He also agrees that the ensuing 2008 financial crisis probably made the 2009 stimulus package and other legislation expanding safety-net eligibility rules politically feasible. But his empirical evidence shows that the implementation of these “recession cures” was primarily responsible for the Great Recession’s depth and duration.

Chapter 6 disaggregates the data and shows that drops in employment and hours worked were not uniform but fell most heavily on lower-skilled groups as well as (holding earnings potential constant) on the unmarried, the nonelderly, and, especially, women. That is, it fell on groups whose incentives to work (Mulligan’s log self-reliance index) were most affected by the expanded social safety net. Mulligan conjectures that if economists were asked to predict the consequences of such a social safety-net expansion before the recession, they might have predicted that aggregate work hours would fall by 8 to 10 percent and would be centered in these very groups—the outcomes that did occur during the Great Recession.

Chapters 7 and 8 respond to Keynesian arguments that the fundamentals equilibrating supply and demand in the aggregate labor market, which are stressed in this book, do not hold during recessions. Hence, Keynesians would argue, the counterfactual estimation strategy used here is irrelevant. Mulligan, however, uniformly shows that labor supply mattered at the margin about the same in 2008,2009, and 2010 as it did in years prior to the recession, including in estimates related to minimum-wage hikes.

Chapters 9 and 10 are periphery theoretical chapters. Chapter 9 investigates more formally the degree to which incentives in HAMP affect banks’ decisions to foreclose on underwater mortgages and on the decisions of the homeowners who are paying off these mortgages to earn income—as discussed in chapter 3. Chapter 10 provides a model of the trade-off between safety and labor efficiency in the government’s response to the increase in perceived risk associated with events such as the 2008 stock market crash and associated financial panic.

The Redistribution Recession is a serious, research-driven book by a currently active academic research economist. Hence, it is completely orthogonal in style and content to the Krugman polemic. For the nontechnical reader, this approach means that many of the technical details of the work will be daunting. But Mulligan provides enough of a heuristic explanation of his statistical methods and findings to drive home his points to noneconomists while providing a much more nuanced explanation for academic economists. He offers a controversial but plausible alternative perspective on the causes of the Great Recession that is consistent with microeconomic foundations of macroeconomics and anchored in sophisticated simulations of the role that the unintended consequences of current policies played in the recession’s depth and length.