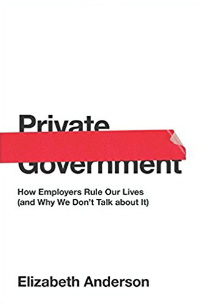 Private Government
How Employers Rule Our Lives (And Why We Don’t Talk about It)
By Elizabeth Anderson
Kindle Hardcover Paperback
This book review appeared in the Spring 2018 issue of The Independent Review.

Libertarians, classical liberals, and market advocates of various stripes often start from what philosophers would—rightly—identify as a “question-begging premise.” (I should note that “begging a question,” in civilized society at least, means assuming a claim that assures a desired conclusion, especially when that initial claim is itself debatable. If you are one of those who uses the phrase to mean “suggests a new inquiry,” you probably don’t read books anyway.)

That premise is a pair of binaries that map onto each other. The first is “state versus market.” The second is “coercive versus voluntary.” The claim is that there is a clean dividing line, and it cleaves at the same boundary: everything states do is coercive; everything markets do is voluntary.

It is obvious why begging the question would be (note the subjunctive) a useful rhetorical strategy in debates, a way of wrong-footing statist opponents: because it requires the supporter of state action to defend coercion when an alternative, voluntary mechanism—markets—exists and can carry out the same functions without coercion.

But nobody outside the libertarian “movement” buys the claim. They see the state (with some exceptions) as embodying the collective, voluntary will to cooperate. And they see markets as exploiting glaring disparities in bargaining power that amount to coercive force. If you want to persuade anyone that markets are substantially less coercive than the state, you will at least need to understand the argument you are up against.

A good place to start is Elizabeth Anderson’s marvelous new book Private Government. The book comprises two essays by Anderson and then four commentaries— one by economist Tyler Cowen—followed by Anderson’s rebuttal. The commentaries are pretty selective, and the two essays at the outset articulate only a little, but overall the book presents a great deal of matter for thought and discussion. The first essay notes, both rightly and in a nicely presented fashion, the change in the relationship between social reformers and market advocates and asks why it is that modern market advocates still invoke clearly anachronistic claims about the market’s capacity for “leveling” in the era of huge firms after the Industrial Revolution.

For the sake of full disclosure, I should note that I myself am known to be a heretic from market orthodoxy on this point, having tried to problematize the notion of “voluntariness.” Economists often simply start there (“Since exchange is voluntary”), whereas a more careful approach requires analysis (“If exchange is voluntary . . . , and how would we know if it is?”). My effort at a contribution to this area is to introduce the idea of “euvoluntary” or truly voluntary exchange (see MichaelMunger, “Euvoluntary or Not, Exchange Is Just,” Social Philosophy and Policy 28 [2011]: 192–211). My claim is that circumstances can be coercive and that this coerciveness cashes out in exchanges in disparity in bargaining power.

Anderson would go quite a bit further; most of the coercion she describes takes place in the workplace. She is cherry-picking a bit in claiming that workplace coercion is comparable to state coercion because she is selecting what she calls “liberal democracies,” where Leviathan is well leashed. There are plenty of examples of state coercion that are simply horrific, far beyond anything firms could do. But to be fair to Anderson, she is citing numerous examples of how workers are abused, humiliated, and forced to work in conditions they would not select if they had better bargaining options, in exactly those liberal democracies where state coercion is rare.

Anderson makes an astute observation early on, using Ronald Coase and other “theory of the firm” research to illustrate that firms are small “command” economies where contracts intentionally leave vague the exact duties of workers. But the vagueness is not a distribution of value to be negotiated but rather works to the advantage of the employer, who can order workers to do a wide variety of things. The only “consent” workers have is not to take the job, ex ante, but of course they don’t know of the problems vagueness will cause until they have been working for a while.

The only “exit” option workers have at that point is to quit their jobs. Anderson notes that a number of economists have treated this “exit” option as symmetric: although it’s true workers can be fired, it’s also true that the worker can “fire” the employer by quitting.And for someworkers, including top athletes, lawyers, and academic “stars,” this threat might be enough. But if labor is a homogeneous commodity, as it is in many industrial or service applications, the threat to “fire” the employer is impuissant: there are dozens of applicants for that job right outside the door.

I would quibble that some of this impuissance is the result of government policies that create rents attached to jobs. Examples include minimum-wage laws, requirements for benefits or holidays, and the practice of paying “efficiency wages” because training is expensive. Just as the landlord in a rent-controlled apartment can ignore complaints about the bathroom, bosses employing workers paid artificially high wages can ignore complaints of harassment or even engage in harassment. Nonetheless, Anderson’s basic point survives intact: many workers lead lives of quiet desperation, coerced by their lack of bargaining power and harsh or sadistic bosses.

There is another objection that Anderson handles less well: Compared to what? There is no dominance relation so abject as that between the government and the governed because the government is heavily armed and the governed cannot easily exit to another country. As difficult as exit is for a worker, in particular a poor worker, the poor citizen has it worse. The recent book by Edward Stringham, Private Governance: Creating Order in Economic and Social Life (Oxford: Oxford University Press, 2016), illustrates that the variety of arrangements that voluntary private groups can use to create organizations holds considerable promise if the state will get out of the way.

Most importantly, I worry that Anderson sees the alternatives as mutually exclusive: either we must rely on the state, or we must regulate firms much more tightly, fostering workplace democracy and a workers’ “bill of rights.” But of course if firms adopt her recommendations, and she’s right about what workers value, then the obvious solution is for her to quit her job as a chaired philosopher at University of Michigan and open Anderson’s Widgets, Inc. It doesn’t matter much what the widgets are because if workers prefer the mix of freedoms and manager accountability that Anderson claims they do, they will accept lower wages to work for her firm.

I suspect that’s not the case, however: many workers seem to want to have higher pay, even if comes with lower personal efficacy, so that they will be able to create lives outside of work that have meaning. You can put up with quite a bit of abuse from your boss if you get that new bass boat, the vacation to the beach, and the financial capacity to do some serious shopping. If workers value personal voice over pay, some firm would be working on that margin already.

These quibbles notwithstanding, Private Government is an important book. I wish there had been some engagement with Stringham’s work, given the similar subjects and opposite conclusions. But anything that gets market advocates to abandon that ridiculous claim that everything in markets is always voluntary is enough for me to recommend the book on that basis alone

Michael C. Munger
Duke University
EconomyLabor and EmploymentLabor Law and RegulationLaw and Liberty
Subscribe Buy This Issue Get the App