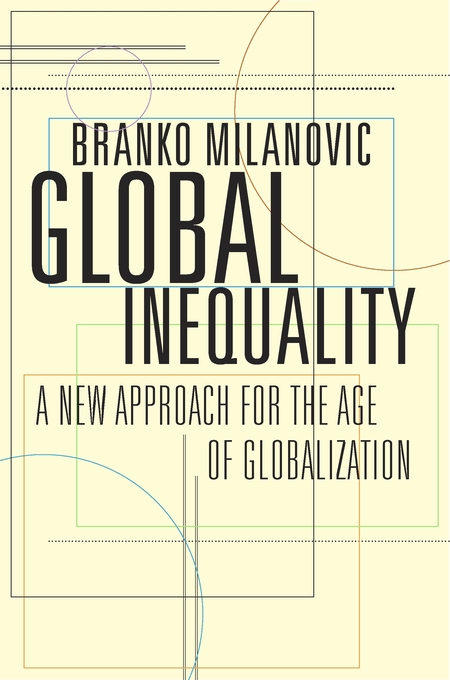 Global Inequality
A New Approach for the Age of Globalization
By Branko Milanovic
Kindle Hardcover Paperback Audiobook Audio CD
This book review appeared in the Spring 2017 issue of The Independent Review.

In several books and many journal articles, Branko Milanovic has established himself as one of the world’s leading authorities on conceptualizing and measuring economic inequality. With his new book, Global Inequality, he rises to a new level of scope and comprehensiveness.

After a brief introduction, the book is organized into five chapters. The first is on how recent developments (such as the rise of the global middle class, the decline of the middle class in rich nations, and the rise of the top one percent) are illuminated by Milanovic’s comprehensive data and analysis. The core of the book’s argument is in chapter 2, on inequality within nations, and chapter 3, on inequality among nations. The fourth chapter anticipates the future of inequality, and the final chapter reviews major issues and speculates about wider implications of the book’s analysis.

This book provides a context that helps us understand a wide variety of important questions and issues, from the current populist revolt in rich countries to the absence of equality of opportunity in the world. Although a political worldview underlies the analysis, the book is scholarly and not at all polemical.

The central idea for understanding inequality within countries is based on an adaptation of the famous Kuznets curve, which argues that inequality rises and then falls with economic development in an inverted U. Milanovic’s innovation is to suggest that there may be no single Kuznets curve for a given country but rather a series of Kuznets curves, or waves, responding to new technological revolutions. For a while, the Kuznets curve was the main model explaining inequality, but since inequality began rising again in the 1980s, Simon Kuznets’s original model became less useful and relevant. With the introduction of the possibility of multiple curves linked to new innovations, Milanovic makes the Kuznets idea relevant again.

Milanovic explains his modification with the idea that there is “a new (second) technological revolution, characterized by remarkable changes in information technology, globalization, and the rising importance of heterogeneous jobs in the service sector. This revolution, like the industrial revolution [sic] of the early nineteenth century, widened income disparities” (p. 54). The data for chapter 2 are several historical time series on inequality, usually Gini coefficients, in a variety of nations. In the theory of Kuznets waves, there is a model of the economy and of the role that the production side plays in influencing inequality and growth. The connection to production provides a basis for addressing questions about how much inequality is desirable. However, this underpinning in economic reality is not so obviously present in the treatment of inequality among nations.

Chapter 3 traces the rise of global inequality among citizens of the world since 1820. Global inequality steadily rose from a Gini value of around 50 to a value around 70 largely on the basis of how the Industrial Revolution increased incomes as the West pulled away from less-developed countries. Global inequality has been declining slightly since the early 1990s. This long episode suggests that rising inequality is not necessarily bad.

One of the most fascinating issues illuminated in the book is how people’s incomes are affected by the country in which they live (location), as distinguished from their position in that country’s income distribution (class). Milanovic designates the former (location) “the citizenship premium” and calls it “essentially a rent”—that is, “independent of a person’s individual effort” (p. 132).

Using household surveys from the Luxembourg Income Studies (LIS), Milanovic creates 100 percentiles for each of 118 countries, going back to the late 1980s, when the surveys began. He asserts that he can “‘explain’ (in a regression sense) more than two-thirds of the variability in income across country percentiles using only a single variable, the country in which people live” (p. 133). Substantively, for example, he shows that average income in the United States is ninety-three times the average income in the Democratic Republic of Congo. He is also able to compare rich and poor percentiles across countries. For example, he shows that a poor Swede is better off relative to a poor Congolese, whereas a rich Swede is less well off relative to a rich Congolese, in both cases because of taxes and transfers (pp. 133–34).

I have some misgivings about this line of reasoning, however. Unlike in the Kuznets waves, there is not even an implicit production side in this analysis. Among the reasons that incomes are higher in some countries than others is that they have more physical capital, more human capital, better infrastructure, better institutions, or some combination of these things. That is, there is much more of economic substance in the form of returns to factors of production differentiating rich nations from poor ones than can be written off as unearned rents. Another way to put it is that no economic theory of production undergirds this analysis of the “citizenship premium,” leaving an incomplete account of inequality. Even in the Kuznets wave explanation of inequality within countries, there is an implicit economic theory of a new industrial revolution inducing more inequality when the demand for skilled labor outstrips its supply in the early stages of that new revolution. Please note that I am not arguing that the country one is born in does not make a very large difference to income prospects, nor am I claiming that any country is free of rent seeking and unearned rents. Milanovic’s idea that there are premiums and penalties associated with one’s place of birth is a very good one, but I do not think he has yet hit that nail on the head.

The final chapter—entitled “What Next?”—presents ten short reflections on the issues raised in the book. All are fascinating, but I will comment on just one question: “Will economic growth still matter?” For Milanovic, the answer is yes. He supports the continued importance of economic growth because it is still “the most important tool for reducing global poverty” (p. 232). I agree with him on this point, although I am confident that we would also agree that growth in gross domestic product is a flawed indicator of human well-being, but perhaps the best we now have.

But economic growth is surely not unambiguously or unconditionally good, and I would like to propose a guideline to evaluate the desirability of growth using distributional conditions. (I am ignoring trade-offs between growth and environmental issues.) If all major income groups either gain or do not lose from economic growth, then growth meets the Pareto standard of making everyone better off without making anyone worse off. But if any major group were hurt by growth, it would fail the Pareto standard. If economic growth were to fail the Pareto standard, this failure would open up new questions and issues. Should compensation of the losers be considered? Should some kind of losers’ insurance be provided? Should some sort of majoritarian procedure be used in the absence of relevant unanimity standards such as Pareto?

Branko Milanovic has thought broadly and deeply about economic inequality, its sources and consequences. He has addressed so many issues in this book in such an enlightening way that I would like to know what he thinks about several more issues. For example, is there an optimal level of inequality? Lower Gini coefficients are almost always considered better than higher ones, but surely a Gini of zero is not desirable, and the rising inequality that initially resulted from the Industrial Revolution was presumably a reasonable price to pay for increased productivity and income. Milanovic is sensitive to the role of production in the rising and falling inequality associated with Kuznets waves. He and his colleagues are imaginative enough to conceive of an “inequality possibility frontier” (pp. 51–53, 69–70). Societies with rising incomes have increasing “space” for inequality, which rises at a decreasing rate with rising mean income levels (p. 52). When does space for inequality lead to increases in output? When is inequality dangerous rather than constructive, and why? Should we say that the optimal level of inequality is conditional? And if so, on what? Under what conditions would there be a trade-off between growth and equality?

If one were to read a single book on economic inequality and its many ramifications, this book, in my view, should be the one. Much progress is made here, but enough issues are left open that one hopes Branko Milanovic will keep writing.