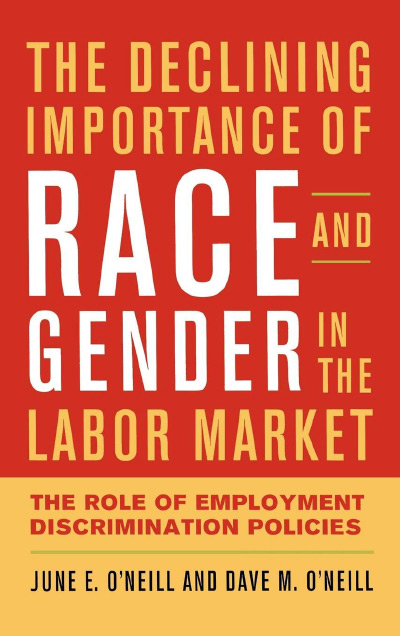 The Declining Importance of Race and Gender in the Labor Market
The Role of Employment Discrimination Policies
June E. O’Neill and Dave M. O’Neill
Kindle Hardcover
This book review appeared in the Fall 2013 issue of The Independent Review.

President Barack Obama declared April 9, 2013, National Equal Pay Day, observing that “women . . . face a pay gap that means they earn 23 percent less on average than men do. . . . On National Equal Pay Day, we recognize this injustice.” To Barack Obama, differential pay between men and women is conclusive evidence that women have been unfairly treated in a discriminatory fashion. The president is not alone in believing that differences in pay by race or gender are proof of discriminatory practices that need elimination by governmental laws and regulatory actions.

June O’Neill and David O’Neill spend more than 240 pages demonstrating, often in elaborate detail, why this belief is wrong. Differences in pay might reflect discriminatory treatment, and no doubt once did so considerably—for example, in significant racially based occupational discrimination in the South. In the past decade or two, however, the reality is that the pay differences between men and women or between races are largely and often entirely explained by group characteristics other than prejudicial attitudes concerning race or gender. For example, the O’Neills demonstrate that men have more on-the-job experience than women, whites have more formal education than blacks, women take relatively low-paying jobs disproportionately (often because such jobs have more amenities and fewer risks than higher-paying jobs), and racial differences in earnings are often powerfully impacted by differences in cognitive skills. Moreover, they also demonstrate that the federal government’s affirmative-action policies have for the most part done little to eliminate discrimination and, indeed, that the narrowing of race and gender differentials in earnings was more pronounced in the pre–civil rights era, from 1940 to 1960, than in the period of rigorous enforcement of the Civil Rights Act of 1964 and related legislation, particularly since 1980.

In the O’Neills’ view, which I think is absolutely correct, market forces, such as massive movement of blacks from the relatively low-wage South to the more remunerative North after 1940, contributed vastly more to reducing racial differences than the plethora of legislative, judicial, and regulatory diktats we have witnessed. Similarly, the rise in women’s labor-force participation in part reflected such developments as the appliance revolution in households, which vastly reduced the labor necessary to perform routine household tasks. This rise in participation, in turn, has in the long run eliminated much gender-based differences in economic status.

As the O’Neills point out, before the Brown v. Board of Education of Topeka Supreme Court decision in 1954 (347 U.S. 483), relatively little federal government action attempted to deal with issues of racial or gender discrimination. Even the armed forces were not integrated until 1948. There was one monumental exception: the end of slavery itself in the 1860s. Wage discrimination of slaves was huge. I once estimated that on the eve of the Civil War slaves earned less than 40 percent of their marginal product—that is to say, less than 40 percent of wages prevailing in the competitive labor market in which most whites participated. Although incomes in the South fell after the Civil War, that decline was concentrated among whites, so the white–black income differential declined dramatically from 1860 to 1880, but the newly freed African American population nevertheless still had substantially relatively lower incomes. (See Richard Vedder, “The Slave Exploitation [Expropriation] Rate,” Explorations in Economic History 12 [October 1975]: 453–57.)

The view is widespread today that in the era before the Civil Rights Act of 1964, blacks were viciously mistreated in labor markets, but that this treatment has largely ended because of that law and subsequent enforcement. There was unquestionably much racial discrimination prior to the law. Yet census sources suggest that black unemployment rates were actually very similar to those of whites before 1940 (Richard Vedder and Lowell Gallaway, “Racial Difference in Unemployment in the United States, 1890–1990,” Journal of Economic History 52 [September 1992]: 696–702). A perusal of various Economic Reports of the President reveal in the forty-eight years following the Civil Rights Act, from 1965 to 2012, the median annual unemployment rate among blacks (11.1 percent) averaged more than double that among whites (5.1 percent). In the era of civil rights legislation, Equal Economic Opportunity Commission (EEOC), Office of Federal Contract Compliance Programs (OFCCP), and other efforts to assure fair and equal treatment of all citizens, by one measure (unemployment), the relative economic security of blacks has declined sharply relative to earlier.

Or take another measure. Compare the nine years immediately before the Civil Rights Act (1955–63) with the most recent nine years (2004–2012). The median annual percentage of white adults working, or the employment–population ratio, rose from 55.3 to 62.8 percent—7.5 percentage points between these two time periods. The percentage of blacks working fell from 57.5 to 57.2 percent. In the era around 1960, more blacks in a population-adjusted sense worked than whites; now the reverse is true. To say that African Americans’ labor market situation has improved dramatically because of public policies in the post–civil rights era is clearly at least debatable. Indeed, a strong case can be made that the vast expansion of the welfare state has disproportionately reduced minorities’ labor-force involvement (and incomes).

The O’Neill analysis, of course, relates to wages. The authors carefully use a remarkable range of methodologies in demonstrating the ineffectiveness of the efforts of administrative agencies such as the EEOC and OFCCP and in showing that wage differentials today are very largely explainable by worker characteristics other than race and gender. In the first half of the book, they methodically review decisions by courts and administrative agencies in a largely verbal appraisal, using the archival research approach favored by historians. In the second half of the book, they use conventional multivariate statistical procedures favored by economists to control for factors other than race or gender that might explain wage differentials. In both parts of the book, they are thorough in their investigations and cautious in their conclusions. The bottom line, however, is suggested by the book’s title: race and gender are increasingly minor factors in explaining labor market outcomes.

Getting the Civil Rights Act of 1964 to pass was a herculean and politically masterful effort led by newly elected president Lyndon Johnson, as Robert A. Caro points out in The Passage of Power ([New York: Knopf, 2012], 353–65, 458–70). But as the O’Neills indicate, it would never have passed without language such as the following: “nor shall it be an unlawful employment practice for an employer to give and act upon the results of any professionally development ability test” and “nothing . . . shall be interpreted to require any employer . . . to grant preferential treatment to any group because of the race, color, religion, sex or national origin . . . on account of imbalance which may exist with respect to the total number or percentage of persons of such, race, color” (p. 28). In short, the act allowed employer testing and seemingly banned quotas. But as the authors repeatedly demonstrate, both the courts (Griggs v. Duke Power, 401 U.S. 424 [1971]) and administrative agencies have ignored and violated this part of the law.

But to what end? After more than fifty pages of detailed analysis of the EEOC, the O’Neills conclude: “[T]he EEOC not only does not do much to reduce discrimination but has overall harmful effects” (p. 118). Employers are faced with daunting costs to meet “reasonable accommodation” and other rules. Some EEOC positions border on outrageous, such as the position that excluding job applicants with criminal convictions is often unacceptable because some racial or ethnic minorities have higher criminal conviction rates than whites (see pp. 98–99). The Civil Rights Act was based on an equality-of-opportunity framework, but administrative agencies follow an equality-of-results approach.

The authors point out that although some employers have a “taste for discrimination,” in reality market forces largely eliminate the broader negative impact that discrimination might have (Gary Becker also makes this point in The Economics of Discrimination [Chicago: University of Chicago Press, 1957]). Racial and gender prejudice is financially costly to those who practice it (limiting its extent), but nonprejudicial employers will hire the workers disfavored by discriminating employers, largely wiping out discrimination-based wage differentials. Robert Higgs found evidence of such an effect as early as the Reconstruction Era (“Patterns of Farm Rental in the Georgia Cotton Belt, 1880–1900,” Journal of Economic History 34 [June 1974]: 468–82).

But it is the authors’ relentless measurement of the impact of nongender/ nonrace characteristics that demonstrates that most wage differentials today are explainable by nondiscriminatory factors. Take one example: the earnings differential between white and black males (p. 211). In 2008, wages for black men averaged about 78 percent of that of whitemen, or 22 percent less. Almost 5 of that 22 percent are explained by blacks’ fewer years of schooling, another 12 percent by lower black cognitive skills (as measured on the Armed Forces Qualifying Test), and more than 4 percent by the lower work experience blacks have relative to whites. Correcting for all of these things, the adjusted wage for black men averaged 99 percent that of white men—a trivial, statistically insignificant difference.

Critics will no doubt find faults with this book. They might claim the econometrics is not sophisticated enough or that the book does not speak enough about occupational (as opposed to wage) discrimination. But I would have to agree with the back cover blurbs from Gary Becker (“required reading for everyone”) and Richard Epstein (“June and Dave O’Neill have written the modern Bible on the role of race and gender in labor markets”). This is a fine book and suggests that the federal government should seriously consider getting out of the business of telling employers who to hire and what to pay them.