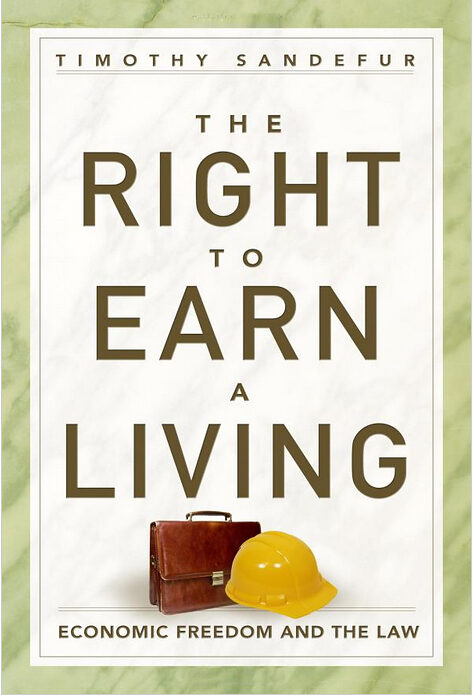 The Right to Earn a Living
Economic Freedom and the Law
Timothy Sandefur
Kindle Hardcover
This book review appeared in the Spring 2011 issue of The Independent Review.

In The Right to Earn a Living, Timothy Sandefur has authored a provocative defense of economic liberty and a wide-ranging assault on legal doctrines that impede the right to earn a living. His analysis is grounded on the conviction that the right to pursue a trade is an aspect of one’s constitutionally protected liberty. To develop his argument, Sandefur examines a wide array of topics—the rise of business corporations, antitrust laws, the contract clause, due process, anticompetitive entry barriers, agricultural price-fixing schemes, the dormant commerce power, commercial speech, expansive tort liability, and regulatory takings of property. Although he clearly recognizes the sorry state of economic freedom in modern constitutional jurisprudence, he calls for courts to safeguard economic rights rather than to reject such claims almost automatically.

Sandefur correctly traces the decline of economic liberty in the United States to the Progressive Era of the early twentieth century. Influenced by socialist ideas, the Progressives condemned the individualistic values embedded in American society. They were prepared to use the coercive powers of government to promote a host of sweeping changes. Progressives sought, among other things, to increase regulation of economic activity and transform social life. They pushed to enhance collective decision making and denigrated traditional individual rights based on natural law. Progressives paid lip service to democracy, but they really desired governance by supposed experts who would in theory devise scientific and nonpartisan policies to shape a better society.

Believing that existing constitutional law exaggerated the significance of property and contractual rights, Progressives took particular aim at the famous Supreme Court decision in Lochner v. New York (198 U.S. 45 [1905]). The ruling simply required the state to justify restrictions on the freedom of individuals to make contracts, but Progressives assailed Lochner in extravagant terms and did much to relegate the decision to lasting disrepute. Notwithstanding a growing body of scholarship that has challenged the stereotype of Lochner fashioned by the Progressives (see, for example, David E. Bernstein, “Lochner v. New York: A Centennial Retrospective,” Washington University Law Quarterly 83 [2005]: 1469–528), misconceptions linger. As Sandefur aptly points out, “[M]any of today’s legal scholars misinterpret or misrepresent Lochner, perpetuating the myth that lies at the center of the modern judiciary’s hostility to economic freedom” (p. 121).

Drawing on the intellectual foundations of the Progressive movement, statist liberalism gained ascendancy with the New Deal’s political triumph. New Deal constitutionalism fundamentally altered pre-1937 jurisprudence. It greatly enlarged the federal government’s reach by abandoning any notion of enumerated and limited congressional powers. Further, the New Deal justices divided the rights guaranteed by the Bill of Rights into categories, exiling property and contractual rights to a lesser status of nonfundamental rights that receive only cursory “rational basis” review by courts. Even the concept of “rational basis” is a misnomer. Economic regulations, no matter how irrational or selfishly protectionist, are presumed to be valid. By adopting this standard, the New Deal justices were signaling that economic rights did not deserve judicial solicitude. As Sandefur tellingly argues, “[T]he difference in treatment between some rights and others is rooted not in principle or consistency but in power” (p. 283). It is difficult to make the case that economic and other personal rights can be easily divorced, but such a separation served the political need of the New Dealers and their progeny. Robust economic rights would hamper the redistributive schemes at the heart of the welfare state, so it was necessary to minimize them.

Sandefur effectively punctures several myths that have distorted our understanding of the history of economic liberty. He emphatically rejects the once-popular thesis that attributes judicial support for property and contract rights in the late nineteenth century to the alleged influence of social Darwinism. Based on virtually no evidence, this controversial thesis became a vehicle to berate economic liberty and free markets. The only Darwinist on the Supreme Court at this time was ironically the Progressive darling Oliver Wendell Holmes. Moreover, Sandefur attacks the dubious proposition that judicial support for economic rights aided the wealthy at the expense of the less fortunate. In actuality, courts that upheld the right to pursue trades and make contracts often benefited small entrepreneurs and racial minorities, who faced discriminatory employment and land-use regulations.

The author convincingly demonstrates that the right to pursue a livelihood has deep roots in American law and society. Yet a few caveats are in order. I am skeptical that the lofty phrases of the preamble to the Declaration of Independence provide a source of support for any specific claim of right, such as the right to earn a living. After all, the Declaration was written in haste to justify the political break with Great Britain, not as a primer on natural law. Over time, persons have tended to attribute their own views to the preamble’s vague language. One should be careful of undue reliance on the Declaration to make constitutional arguments.

Sandefur gives rather skimpy treatment to the contract clause, once among the most litigated provisions of the Constitution. This treatment no doubt reflects the clause’s diminished status in modern constitutional law. Sandefur unfortunately advances the dubious argument that the contract clause was “aimed at protecting private contracts, not contracts with the government” (p. 79). Scholars have increasingly questioned this narrow interpretation of the contract clause popularized by the Progressives. The clause was not heavily debated at the constitutional convention, but the language is not limited to particular contracts, and proponents of the Constitution did not distinguish sharply between public and private contracts. (See James W. Ely Jr., “The Marshall Court and Property Rights: A Reappraisal,” John Marshall Law Review 33 [Summer 2000]: 1023–61.)

Zoning is a topic that warrants greater attention from Sandefur. He surely makes clear how in recent years zoning laws have been used to stifle business competition in the guise of protecting the community. But land-use controls, an important legacy of the Progressive penchant for planning by experts, have long been utilized to achieve exclusionary goals. During the Progressive Era, many cities adopted ordinances mandating racial segregation in residential areas. In the neglected but important case Buchanan v. Warley (245 U.S. 60 [1917]), the Supreme Court invoked due-process protection of the right to acquire property to strike down such laws. A discussion of this case would have strengthened Sandefur’s argument that principled support for property rights can aid disadvantaged groups seeking to advance their interests. Many Progressive Era figures criticized the Court for not deferring to legislative judgments that segregation would promote racial harmony.

Sandefur is well aware that he faces an uphill battle in seeking to revitalize economic rights. He cautions that “economic liberty has never been thoroughly and consistently protected in American law” (p. 285). The United States has never experienced a strict laissez-faire period, and the federal courts, contrary to assertions by Progressives and New Dealers, did not seek to impose one. (See David N. Mayer, “The Myth of ‘Laissez-Faire Constitutionalism’: Liberty of Contract during the Lochner Era,” Hastings Constitutional Law Quarterly 36 [Winter 2009]: 228–48.) Even the property-conscious Supreme Court under the leadership of Chief Justice Melville W. Fuller sustained a good deal of economic regulation. Although the Court under Chief Justice William Rehnquist more recently helped to restore property rights to the constitutional agenda, it ultimately failed to develop a muscular takings jurisprudence. Despite its conservative reputation, the Rehnquist Court often upheld governmental controls over individuals’ property right. “The supposed far-right Rehnquist Court,” Sandefur accurately observes, “actually accomplished little in the way of enforcing the Constitution’s protections for property rights” (p. 277).

This failure raises the question of whether economic rights have any future in the face of collectivist pressure. Sandefur seems ambivalent about the viability of economic liberty. He laments that “property owners and business owners have largely failed to stand up for their rights” (p. 283). It is hard to secure rights for people who make little effort on their own behalf. To restore economic liberty to its pre–New Deal status, much less to reach Sandefur’s desired level of economic freedom, would require a sea change in popular and judicial attitudes. Indeed, he concludes that “it is only cultural and social change that can revive the freedom of economic choice” (p. 293). Such a dramatic shift does not seem imminent, but perhaps this rewarding volume will stimulate renewed interest in the importance of economic freedom.