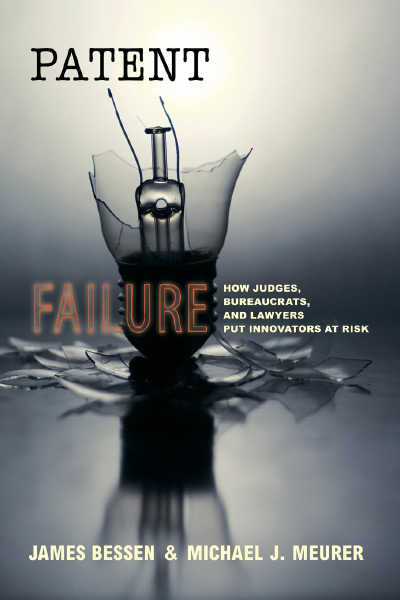 Patent Failure by James Bessen and Michael J. Meurer, professors at the Boston University School of Law, provides a useful and highly informative antidote to the “faith-based” reasoning that usually dominates discussions of the patent system.

Patents are special forms of “intellectual property” that grant to their owners the exclusive right to control the production or use of a specified product or productive process. The notion behind such “property rights over ideas” is that without such control, these ideas would be reproduced freely, would therefore cease to be scarce, and hence would lack any market value. The purpose of patents is to create a scarcity, thereby generating a monopoly rent for the holders of these rights. (Note that the law itself creates the “scarcity”—the source of the monopoly rents that make the rights valuable.) Thus, these rights are really nothing more than legal monopoly privileges granted by state fiat, which suggests why a dissenting tradition in free-market economics has always viewed patents with suspicion.

Like any other monopoly privilege, patents can obviously be very valuable for their owners, although that value is not in itself a good reason to justify concessions of this sort. Here the relevant questions are: Why would society want to award such privileges to some of its members, and how does society at large benefit from the existence of patents? The conventional answer is that the existence of patents stimulates invention and innovation, which are the ultimate sources of increased productivity, rising incomes, and increasing standards of living. Indeed, modern defenders of the patent system, dazzled by the wonders of modern technology, never cease to stress the need to stimulate further technological development. An implicit assumption, of course, is that patents cause (or at least are one important cause of) all these good things. Oddly enough, this assumption has been so much taken for granted that evidence is hardly ever offered to support it. Moreover, when the issue has been examined empirically, the evidence almost uniformly fails to confirm the assumption. (The authors provide an excellent survey of this research on pages 73–94). In fact, patented inventions account for only a small fraction of relevant productivity growth.

Even this account probably overestimates the net effect of patents, however, because in principle what we want to measure is the marginal benefit derived from the existence of patents—that is, the inventions that would not have been produced without them. We may not simply assume that all inventions currently patented were invented owing to the existence of patents because many of them would have been developed even without that incentive. This marginal social benefit should be compared with the marginal social costs that the patent system imposes on society. Apart from the considerable administrative and legal costs associated with patent litigation, perhaps the most obvious economic cost is that in order to create incentives for the production of inventions that otherwise would not have been developed, patents create monopoly privileges over inventions that would have been developed even without the incentive.

The cost-benefit analysis required for a conclusive evaluation of the social utility of a patent system—that is, a comparison of relevant social benefits and relevant social costs—is admittedly very difficult to carry out, so the question remains one of the great unresolved problems in economics. The book under review does not attempt to solve this problem, though it does provide a great deal of useful information and helps to clarify some of the issues involved. The authors do so intriguingly by leaving the larger issue aside and considering instead a much more limited question: “We can determine, with reasonable accuracy, whether or not patents provide net positive benefits for a given group of inventors. This does not tell us whether patent policy is optimal or not. . . . There are many factors we cannot measure that go into a calculation of the optimal incentive. On the other hand, if patent incentives are negative, then . . . patents do not do what they are supposed to do, and it is not likely that they will spur innovation and increase social welfare” (p. 12, emphasis added).

In the conventional view, because patent protection affects innovation by increasing the average return on inventive activity devoted to patentable inventions, it follows that if the patent system is working properly, the average firm’s patents should at the very least generate more profits than the litigation cost of dealing with patent-infringement lawsuits brought by other firms. As the authors put it, “Potential innovators consider not only the reward that they might reap from owning patents, but also the risk of being sued for infringing upon the patents of others. Clearly, if the risk of inadvertent infringement is too great, the net incentives provided by the patent system will be negative, and patents will fail as a property system” (p. 9). If litigation costs in fact exceed patent profits, then the system is actually a drag on innovation, and innovating firms would be better off on balance with no patent system at all. (They would not get the profits they derive from their own patents, but they would save the money they spend as defendants in infringement suits involving other companies’ patents.)

Though Bessen and Meurer deal with many other aspects of the patent system as it works today in the United States, this issue is the hard core of the book, and their main and most novel finding pertains to the profitability of patent protection for patenting firms. In chapters 5 and 6, they document several major trends regarding this issue. First, patent litigation in the United States rose sharply in 1990s, and the costs of patent litigation rose even more sharply (the major exceptions to this trend were in the chemical and pharmaceutical industries). Though aggregate patent-litigation costs for alleged infringing firms in nonchemical and nonpharmaceutical industries averaged about $2 billion per year during the 1980s, by 1999 patent litigation was costing alleged infringers about $12 billion annually.

Second, they argue convincingly that most of this litigation did not arise from “willful infringement” by defendants, but from what they call “inadvertent infringement” arising from ambiguity and excessive abstraction in the language of patent claims. Software and business-method patents are particularly problematic in this regard, and by 2002 software patents were involved in more than 25 percent of all patent lawsuits in the United States (p. 192).

Third (again with the exception of chemical and pharmaceutical companies), for the average U.S. firm these increasing patent litigation costs now actually exceed profits from patent portfolios by a wide margin: by 1999 patent portfolios generated only about $3 billion per year in aggregate profits for firms in nonchemical and nonpharmaceutical industries. Bessen and Meurer therefore conclude that outside the chemical and pharmaceutical industries, firms are no longer earning enough from their patents to offset the cost of defending themselves against infringement lawsuits brought by other firms. Even for those who (like me) have never given much credence to the conventional wisdom on patents, this conclusion is a surprising one.

Or maybe not. Should we really be surprised that the patent system’s internal dynamics have finally brought us to the point at which the potential profits of patenting have, for most industries, been entirely gobbled up by lawyers’ fees? Isn’t that outcome what we should expect after having studied the literature on rent seeking? If patents are really nothing more than special privileges granted by the state, then wouldn’t we expect the monopoly rents derived from such grants to become dissipated eventually through steady increases in rent-seeking costs?

A short review cannot do justice to the many other topics Bessen and Meurer cover in this well-written and well-documented book. As noted earlier, however, their finding regarding the profitability of patents for patenting firms is the pie’ce de re´sistance, and in view of this finding it is hard to disagree with their conclusion that “it seems unlikely that patents today are an effective policy instrument to encourage innovation overall” (p. 216). Instead, it seems clear that nowadays “patents place a drag on innovation” (p. 146). In short, “the patent system fails on its own terms” (p. 145).