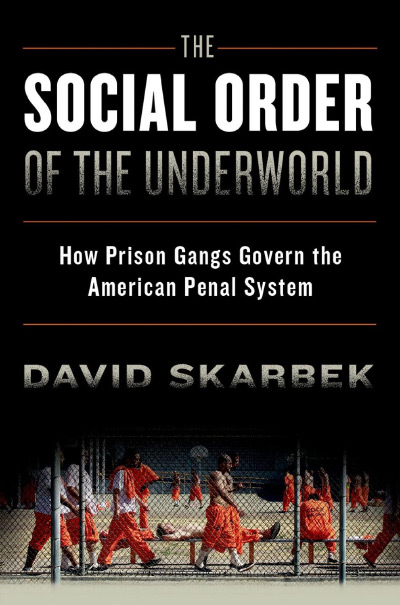 The Social Order of the Underworld
How Prison Gangs Govern the American Penal System
David Skarbek
Kindle Hardcover Paperback
This book review appeared in the Spring 2015 issue of The Independent Review.

David Skarbek’s new book The Social Order of the Underworld: How Prison Gangs Govern the American Penal System is meticulously researched, soundly reasoned, well written, and accessible to specialist scholars and casual readers alike. It should be considered required if not immediate reading for anyone with serious research interests in either economics or the applied fields of crime and punishment.

First and foremost, Skarbek’s work reaffirms the explanatory power of the economic way of thinking. His commitment to rational-choice analysis and his understanding surrounding the potentials for self-regulating and spontaneously evolved social institutions offer fresh insights to comprehend an important topic relatively uninvestigated in recent years through similar techniques. Previous researchers attributed prison gangs’ rise and stability to latent racial hostilities, but such analysis leaves much unexplained and fails to fully accord with the particular timing and magnitudes of the trend. In contrast, Skarbek considers seemingly psychotic gang members as rational and purposeful agents. Their preferences are subjectively shaped by their criminal identities, just as their pursued courses of action are uniquely constrained by their imprisonment. As a result of this view, he is able to recognize how the distinctive conditional factors of prison society—such as extreme resource scarcity, a population of potentially violent and hostile agents, and unreliable security from public authorities—shape inmates’ incentives and behaviors in favor of the emergence of rules and customs galvanized within the organizational form of prison gangs.

Skarbek provides a uniquely compelling and I think accurate explanation for the puzzling and recent rise of criminal gang organizations throughout the American prison system. In short, inmates coalesced on the organizational form of prison gangs because guarded security and previously common social customs were less effective amid extreme prison population growth during the late twentieth century, and so the inmates received from gang organizations governance mechanisms akin to contract enforcement, personal security, and dispute resolution.

In prison societies, material resources from basic amenities to narcotics are heavily regulated and/or prohibited by managing authorities, yet demand for them remains intense and thus their profit potential high. By their very nature, inmate populations are filled with nefarious members, but the confines of prison life in previous eras sufficiently attuned inmates to the benefits of long-run cooperation over conflict. Hence, informal and self-enforced inmate codes of conduct date back historically as long as prisons themselves.

In earlier decades, smaller and more homogeneous inmate populations represented relatively low coordination costs for smuggling, production, and conflict adjudication. However, as prison populations exploded in recent decades, the efficacy of informal codes began to fray and ultimately to unravel. Larger and more heterogeneous groups of confined criminals made cooperation and coordination more difficult to develop and maintain. In turn, networks of trust aligned by race, ethnic identity, and productive comparative advantage emerged with evolved organizational structures that were affixed with internally enforced checks and balances to fill the needed roles of security and conflict adjudication. Skarbek shows that from the inmates’ perspective—which he has thoroughly surveyed with original source materials, secondary academic research, and journalistic reports throughout the text—prison gangs serve a crucial function in the maintenance of social order behind bars.

Skarbek’s work also serves as a much needed methodological and theoretical update to the currently dominant and arguably incomplete models of crime and punishment. In a way, prison architectures symbolize and affirm a standard framework. Razor wire and gun turrets communicate that something dangerous lurks within these armored boxes and that such cages presumably keep society safe. Prison spaces communicate this implicit model of social order and governance not only to their inhabitants but also subtly to all citizens living throughout society. Human beings possess an incredibly dangerous capacity for evil and violence. Crimes are illegitimate and harmful to society. Prisons are essentially tools used simultaneously to punish evildoers, to protect the innocent, and to deter evil henceforth. As early penal theorist and prison designer Jeremy Bentham summarized, “Morals reformed—health preserved— industry invigorated, instruction diffused—public burthens lightened— Economy seated, as it were, upon a rock—the Gordian knot of the Poor-Laws are not cut, but untied—all by a simple idea in Architecture!” (“Panopticon,” in The Panopticon Writings, edited by Miran Bozovic [London: Verso], p. 30).

Yet attempts to measure and affirm the empirical effects of the incarceral model of criminal punishment have born relatively ambiguous results. Recidivism persists; the financial costs of penal growth appear unsustainable; and cross-national crime rates do not seem to accord directly with prison trends. The naturally inquisitive mind rightly wonders simply what occurs inside these facilities. Yet prison ethnographic research has been increasingly rare in recent years. We can be thankful that Skarbek is one such inquisitive mind and that his rational-choice and new institutional approach transcends the empirical challenges of his subject matter.

Most disconcerting in his findings are those that show the effects of prison gangs beyond penitentiary walls and throughout traditional society. Prisons are the default resolution to crime and social disorder. Most people think naturally that if someone breaks the law, he or she should go to jail, yet Skarbek’s research uncovers that the influence of social organizations forged within the confines of incarceration is far more complicated and perhaps problematic. Once inside prison walls, the individual criminal must acclimate his behaviors to a system of rules and power relationships enforced by extreme violence, authoritarian hierarchies, and distrust. Given the high and growing numbers of released inmates and their difficulties reassimilating into free society, one must wonder how difficult or perhaps even impossible it may be to leave behind the cultural learning associated with surviving the prison community. The prominence of urban street gangs and their abilities to coordinate illegal immigration and the production and distribution of narcotics seem influenced if not encouraged directly by the organizational structures of prison gangs and indirectly by the conditional factors of prison space. In a way, reading The Social Order of the Underworld causes one to see prison architectures in a new light. Armored boxes incubate social systems where violent power and cut-throat retaliation are rewarded, kindness exploited, and trust is never certain. The individuals who have had to live in these systems are then periodically cycled back into traditional society with unsurprisingly hazardous consequences.

Many activists and analysts have long argued for prison reform, but such efforts are largely stunted by society’s relative ignorance regarding the full and accurate costs and benefits associated with such institutional forms. In no uncertain terms, the world is better informed thanks to this groundbreaking text. In full honesty, The Social Order of the Underworld is a book I wish I had had the insight, time, patience, and dedication to write. I only hope that similar works will follow in its wake.