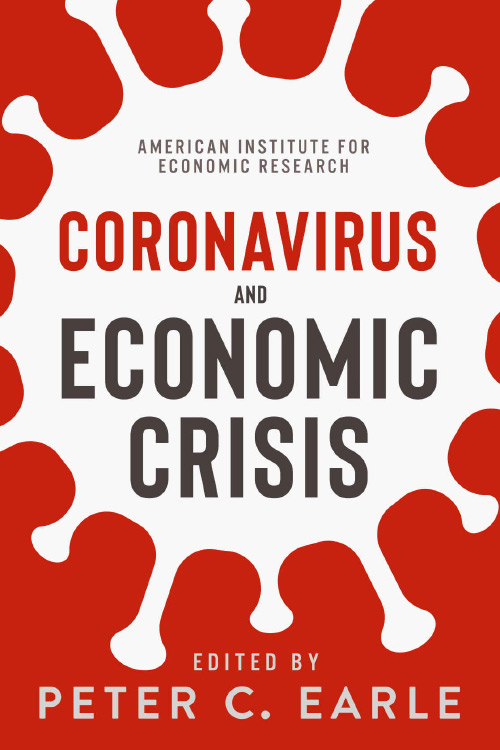 Coronavirus and Economic Crisis
Edited by Peter C. Earle
Kindle Paperback
This book review is a web exclusive for the Summer 2020 issue of The Independent Review.

A couple of months ago, I reviewed another book on the economics of the coronavirus, Economics in the Time of COVID-19, edited by Richard Baldwin and Beatrice Weder di Mauro (London: CEPR Press, 2020) for The Independent Review. I summarized that book this way: “As this deadly virus grips the world’s attention, what can economists tell us about its likely impact? Not much. What advice can they offer? Plenty.” A problem with that book and its advice is that some of the authors accepted at face value dire predictions suggesting many millions of deaths from the virus. A strength of Coronavirus and Economic Crisis, edited by Peter C. Earle from the American Institute for Economic Research (AIER), is that the contributors—writing in February and March, roughly the same time as the authors of Economics in the Time of COVID-19—understand the incentives of many, especially those in power, to exaggerate the costs of the virus. Reading this book in early May, their concerns about overwrought responses to the virus seem very prescient. I don’t think this is a fluke or a series of lucky guesses. Instead, it is tied to a careful reading of the data and a vigilant eye on those with an incentive to magnify the sense of crisis.

The book chronicles AIER’s coverage of the coronavirus outbreak and includes about forty short essays, many by authors who have contributed to The Independent Review, including Art Carden, James Caton, Richard Ebeling, Vincent Geloso, Will Luther, Allen Mendenhall, Richard Salsman, Edward Stringham (AIER’s Director), Robert Wright, and Bruce Yandle. Most essays are about five pages long, but a couple of excellent essays by Ebeling, “To Kill Markets Is the Worst Possible Plan” and “Leaving People Alone Is the Best Way to Beat the Coronavirus,” are closer to twenty pages. The authors uniformly clarify the issues at stake in public and governmental reactions to the virus, writing in clear, engaging prose.

The overriding theme is that this is no time to trade away freedom for the false hope of security. “What is better for dealing with pandemic disease,” asks editor Peter Earle: “martial-law quarantines imposed by the state ... or keeping society open while trusting medical professionals, individuals, families, and communities to make intelligent decisions?” (p. 105). Lest one think that this first option is more sensible, the authors document a string of unintelligent decisions on the part of government—especially moves by the FDA and CDC to shut down others’ efforts to test for and track the virus. If ever there is a time for polycentricity—multiple centers of power and decision making—it is in working to tackle a virus. (Polycentricity will be the subject of The Independent Review’s Fall 2020 symposium.)

Perhaps the most important liberty lost during the pandemic has been due to the decisions of many state and local governments to impose lockdowns and quarantines—draconian central planning, “decreeing the work of all too many illegal” (p. 195). If diseases are serious enough, such decisions can be justified if used appropriately and narrowly. However, in this case the impact of the disease itself has been fairly mild for most of the population. Symptoms are mild to nonexistent among children, young adults and most middle-aged people. The vast majority of hospitalizations and deaths from the virus have been among the elderly and those already in poor health, with the median age of those dying from COVID-19 in the U.S. being in the upper seventies. Accordingly, an approach tailored toward limiting the spread of the disease toward these high-risk groups makes more sense than blanket prohibitions on day-to-day activities, such as going to work, going to church or engaging in social activities. Individuals are in a far better position than state governors to assess their own risks and take precautions.

Instead, despite all our technological advances and medical progress, the knee-jerk reaction of putatively twenty-first century governments has been to “go medieval” (p. 43)—Robert Wright’s apt metaphor for imposing quarantines and shutting down economic activity. Governments have made these decisions with scant information and little consideration of the economic, social and liberty costs. Jeffrey Tucker reminds us that government doesn’t have “some special magical access to information on risk probabilities and the proper way forward” (p. 122). Despite this, states across the country have used China—a regime that cares nothing about liberty—as their model, rather than its neighbor South Korea. “South Korea preserved the open society and now infection rates are falling” (p. 105), as Peter Earle chronicles. South Korea’s strategy has been to use widespread testing, isolate those infected and let others go about their lives, protecting themselves as prudent people do. South Korea has had only about 250 deaths as of this writing. Meanwhile, governments in the United States have acted as though the only tool available was their lockdown hammer and, inevitably, they have smashed the economy. (The inordinate federal government response to the pandemic came right as Coronavirus and Economic Crisis went to press, so the authors didn’t have time to explore its excesses and missteps, especially the massive deficit spending involved.)

Why has the state reacted as it has in the U.S.? John Tamny argues that it’s because “economic crisis is the state’s oxygen” (p. 70), which may be why “government has only added to insecurity and fear” (p. 115). (Robert Higgs would add that it’s not only economic crises that ratchet up the size of Leviathan.) This helps explain the supply side of government growth, but what about the demand side? Why do Americans today turn to the government to solve problems that it cannot fix? Richard Salsman argues that “liberties are being lost out of an irrational obsession with safety and security, with a puerile need for a ‘social safety net’ immunizing us from every change and risk” (p. 215). Many Americans have been infantilized. Too many of us no longer look down, see that we have two legs and learn how to walk. Likewise, too many of us have never learned the basics of economics—that laws against price “gouging” cause shortages; that economic prosperity is ultimately driven by investment, technological progress and production rather than spurring consumption; that “the key to human flourishing is maximizing competition on price and quality on the one hand and on the other minimizing competition for political favor” (p. 155); and that rational decisions are made by weighing both benefits and costs.

When my classes resumed after spring break, I asked students in Introduction to Economics—now scattered all over the country—to consider the costs and benefits of my university’s decision to shut down campus and move to remote learning: “What are the costs? What are the benefits? Which is likely to be greater?” Most concluded that the benefits were greater than the costs, but being novices they largely listed a few costs—the university will have to refund room and board payments, people won’t learn as much—and also a few benefits—the disease won’t spread as much—and then guessed that the benefits of the shutdown exceeded the costs. About ninety percent reached this conclusion. This is approximately what government also did in making its lockdown decisions, although it’s not clear that they always even considered the costs. Ultimately, they went with their gut reaction or what they thought would be the voters’ gut reaction, without actually weighing—which involves quantification.

When I discussed the assignment with the students afterward, I tried to emphasize the importance of quantification and did some rudimentary number crunching with them. How many lives would the shutdown of campus save? Based on then available (March 23) numbers, I estimated that the shutdown wouldn’t save any student lives, since their demographic has only mild symptoms from COVID-19. However, the shutdown would probably save some faculty and staff lives. Based on rough estimates of the faculty’s age profile, the latest numbers on age-specific mortality rates, and a guess that about half would get the virus, I concluded that the campus shutdown would save about four lives. How much value does society place on a life? Policy makers and individuals must make decisions all the time that implicitly put a price tag on life, allowing us to calculate an economic principle known at the value of a statistical life (VSL), which I discussed with my class. (I explain that in order to value a lost life economists can, for example, look at the differences in pay of two otherwise identical jobs—one that’s dangerous, the other that’s safe. If one person in a thousand dies on the dangerous job each year and workers demand and extra $10,000 per year to work in that job, then if 1000 work in that job, one dies and they are collectively paid an extra 1000 x $10,000 = $10 million. This $10 million is the value of a statistical life.) Most VSL estimates for the U.S. are in the ballpark of $10 million. What about the costs of shutting down? I explained that tuition (willingness to pay) is a lower-bound estimate of the value of a college education and estimated that about half of the value of attending a good liberal arts college comes from the learning, with the other half coming from living among other students and enjoying the unique college experience. Based on numbers like these, I concluded that the benefits of shutting down were somewhat higher than the costs—although the opposite is plausible given the range of reasonable alternative estimates. (For example, it has been estimated that each COVID death eliminates ten life years. As the estimated value of a statistical life year is closer to $100,000, this implies a much lower benefit from shutting down.) This analysis is plainly rather rudimentary, but—to the detriment of all—it is doubtful that policy makers did anything approaching it in making their decisions to shut things down or considered that people could make simple calculations like this using their own local knowledge.

Coronavirus and Economic Crisis ably chronicles missteps like these and argues that when the “crisis” is over, we need to ask again and again, “don’t you remember the overreaction to COVID-19?” (p. 171). I think we will. When I googled the term “overreaction,” the top suggestion was “to coronavirus.” Some have suggested that we should “never let a good crisis go to waste.” Perhaps, it is more important that we never let a bad crisis go untraced and work to insure that COVIC—the coronavirus-industrial-complex—is a smaller problem than COVID—the coronavirus disease.

Robert M. Whaples
Wake Forest University
Civil Liberties and Human RightsCOVID-19Culture and SocietyFDA and Drug RegulationFreedomHealth and HealthcareLaw and LibertyPhilosophy and Religion
Subscribe Buy This Issue Get the App