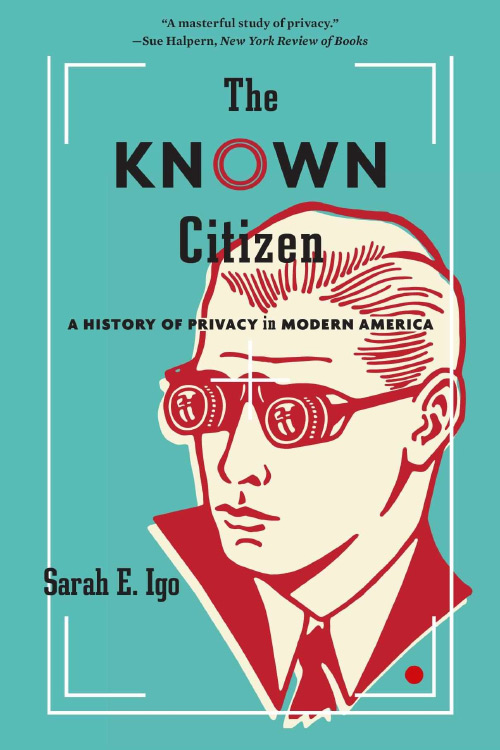 The Known Citizen
A History of Privacy in Modern America
Sarah E. Igo
Kindle Hardcover Paperback
This book review is a web exclusive for the Summer 2020 issue of The Independent Review.

When one thinks of privacy today, they might think of the “surveillance state” or “surveillance capitalism.” The former refers to the use of surveillance technologies by governments to monitor people domestically and abroad. The latter refers to the mass collection of information on private persons by for-profit businesses who then use that data to inform a range of business decisions—e.g., what to produce, how to allocate resources, and how to customize and target advertising. As Sarah Igo’s important book demonstrates, however, concerns over privacy have existed in America for well over a century.

In 1890, Samuel Warren and Louis Brandeis published “The Right to Privacy” in the Harvard Law Review. Motivating the article was the realization that “[n]ew means of sharing and communicating information were altering the very contents of public and private life” (p. 41). At the time Warren and Brandeis wrote their article, new technologies were changing the way people thought about privacy. For example, the introduction of telephone wires increased connectivity while also allowing for eavesdropping. Innovations in portable cameras enabled more people to take pictures of others in public spaces. This had implications for the use of images and information about people who did not necessarily consent to their use. The Known Citizen opens with these historical developments and then traces the various technologies, policies, and cultural factors that have contributed to the evolution of how privacy was, and is, perceived.

During World War I, the reach of the surveillance state became evident as the U.S. government monitored and arrested “subversives” who were deemed to be threats to the war effort. The spread of technologies such as fingerprinting, which had first been introduced in 1890s, allowed police departments to collect and catalog information on citizens. As America moved into the 1930s, the scope of the administrative state was evident. As Igo notes, “[w]hether through an application for a birth certificate, a driver’s license, or a passport, a broad swath of the citizenry would be drawn into a swelling bureaucratic apparatus of U.S. society” (p. 56).

Perhaps the best illustration of issues of privacy at the time is the introduction of Social Security. The organization and provision of Social Security benefits required the implementation of methods for collecting identifying information on citizens including their name, date of birth, and earnings over their working lifetime in order to calculate benefits. Determining the means of identifying and tracking citizens led to intense debate. The Social Security Board eventually settled on issuing a nine-digit Social Security number to each citizen. But not before critics warned that state-issued numbers “summoned the prospect of regimentation and dehumanization: of authoritarian governments that knew their citizens all too well” (p. 65). It should be noted that concerns were not just about how the government might use the information collected. A related, and for some a more important, concern was how private businesses might use this information on private citizens. Specifically, members of labor unions expressed worry that a worker’s documented history, including their union affiliation, could be used by future employers to discriminate.

Despite these worries, the assignment of a Social Security number was, for many, a source of pride. Igo notes how businesses advertised jewelry and commemorative plaques with engraved Social Security numbers. Some people chose to get a tattoo of their Social Security number. This highlights a nuance of privacy and being known. While some value privacy others value foregoing privacy as a means of publicly signaling commitment to an idea or membership in a group. Privacy is subjective across people. For the same piece of personal information, some people may wish to remain unknown while others desire to be known in order to communicate information or signal to others.

Igo highlights several trends, beginning in the 1960s, which shaped the discussion of privacy and what it meant to be known. The first is the rise of computers and computing power resulting in greater interconnectivity and, perhaps more importantly, the ability to gather and store massive amounts of information. A proposed National Data Center in 1965, intended to streamline and centralize fragmented government data, met with a public backlash that led to the ultimate rejection of the plan. Fear of the perverse effects of computers on citizen privacy was reinforced by the release of the Church Committee report in 1975, which revealed abuses of state surveillance by the FBI, CIA, NSA, and IRS.

A second trend was the emergence of new areas of research in the social sciences. Igo discusses the rise of new methods and techniques for psychological testing and monitoring to understand human behavior. Beyond ethical issues associated with research, these areas of inquiry, as well as the techniques employed, were increasingly incorporated into market research and employment with the goal of understanding consumer desires and to assess the personalities of employees. Igo also discusses the sociologist Laud Humphrey’s controversial book Tearoom Trade, an ethnography of anonymous male-male sexual encounters in public bathrooms, published in 1970. Humphrey’s study raised a number of ethical issues because he did not obtain subject consent and used license plate numbers to obtain personal information, such as names and addresses, of those he observed. He then interviewed subjects about their personal life—health, employment, attitudes, and family details—without informing them of his purpose. Like the research of psychologists, Humphrey’s ethnography raised fundamental issues about the trade-off between the privacy and dignity of people who were subjects of study, and advances made by gaining new knowledge.

The rise of reality television and tell-all memoirs are other mediums which reflect norms regarding privacy. Igo discusses An American Family, a television documentary which aired on the Public Broadcasting Service in 1973. The show, which is considered the first reality television series, followed the Loud family in their day-to-day lives in Southern California. Among other things, the show captured the divorce of Bill and Pat Loud and the impact on their children. The show was also important because during the filming Lance Loud, one of five teenaged children, came out as homosexual, resulting in him becoming an icon of the gay community. This highlights another aspect of being known. Igo highlights how making public what was once private—in this case one’s sexual orientation—can potentially contribute to social and political change through increased awareness and acceptance.

Three important themes emerge from The Known Citizen. First, tensions over privacy and being known are nothing new in American history. The context—technology, norms, and legal considerations—has evolved, but not the underlying tensions between maintaining privacy and being known. Second, privacy is a nuanced concept. The absence of privacy is not necessarily bad as it allows people to communicate certain information, obtain certain status, and affect change. It is best to think of privacy as subjective and heterogeneous both for each person and across people. Individuals often choose to forgo privacy on some margins in order to maintain privacy on other margins. For example, applying for a credit card requires revealing private information to the issuing company. However, obtaining a credit card allows people to maintain their privacy in subsequent interactions and transactions with others around the globe. Third, because privacy is a nuanced and constantly evolving concept, government regulations tend to lag. “Rapid technological advances and their implementation by corporations, law enforcement, and the military seem to empty privacy rights of their substance” (p. 363). This poses a challenge for those seeking to rely on the state to regulate various factors influencing one’s privacy.

In the concluding chapter, Igo briefly raises an issue which deserves deeper consideration. She notes that following the September 11, 2001 attacks the “wide-open information channel between the public and private sector” became evident (p. 357). This highlights an important reality—while both the government and private firms collect significant data on individuals, their methods and purposes differ. Private firms collect data to better meet the needs of consumers. This might be used to obtain feedback on products or services or to better market these products and services to consumers.

Some view this “surveillance capitalism” as a negative because it allows corporations to price discriminate, for example in the case of insurance, or to influence consumer tastes. For an economist, it is far from clear that price discrimination (charging a different price to different consumers for the same product) is bad. Take the case of insurance. By revealing information about oneself it is true that higher-risk people will need to pay more. At the same time, however, low-risk people will pay less. What about influencing consumer wants? F.A. Hayek offered a response to John Kenneth Galbraith’s idea of a “dependence effect” which held that most wants do not emerge from within the individual but instead “are increasingly created by the process by which they are satisfied” (The Affluent Society. 40th edition. Boston: Houghton Mifflin Company, p. 129). Hayek agreed that many wants do not originate from within individuals. But except for broad categories of wants—e.g., food, shelter, sex—people’s personalities, desires, and wants are influenced from their social environment, of which advertising is one aspect (Friedrich Hayek, The Non Sequitur of the ‘Dependence Effect.’ Southern Economic Journal 27, no. 4 [1961]: 346-348). Pointing out that wants are misguided or illegitimate because they originate from outside the individual, therefore, is to reject most of human existence.

As discussed earlier in the case of Social Security, the government also collects data to provide certain benefits to citizens. But it also collects information as a source of social control as illustrated by the illegal use of surveillance to squash the anti-war and civil rights movements. The difference between the state and private firms is that the former is defined by its legal monopoly on force. The state can therefore use the information it collects, or the information collected by private firms, to more efficiently harass, imprison, torture, or murder people. The defining feature of the state is what makes its widespread collection of data especially worrisome and adds additional nuance to considerations of privacy as it pertains to the actions of governments and firms. A key contribution of The Known Citizen is to provide the historical foundation that allows for a deeper consideration of these, and related, issues for understanding the role of privacy in a free society.