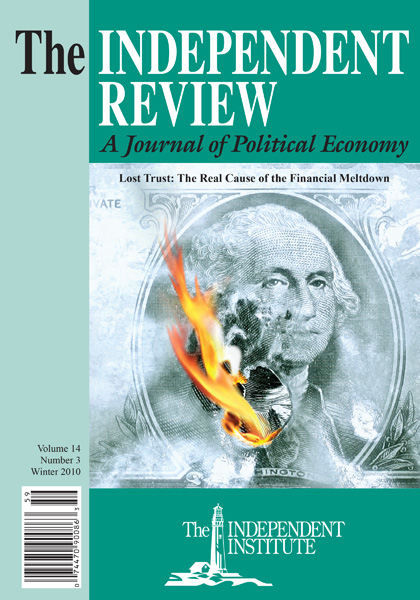 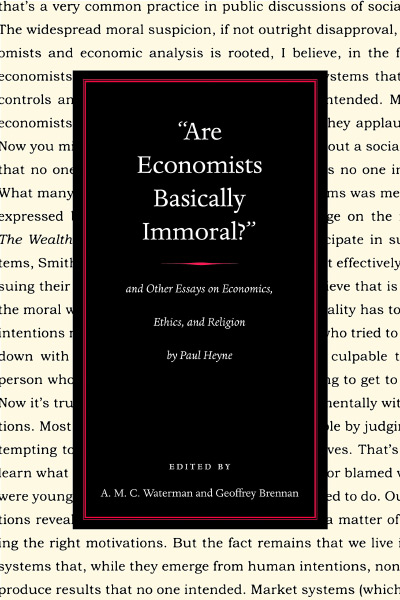 “Are Economists Basically Immoral?”
and Other Essays on Economics, Ethics, and Religion
Paul Heyne. Edited and with an introduction by Geoffrey Brennan and A. M. C. Waterman
Hardcover Paperback
This book review appeared in the Winter 2009/10 issue of The Independent Review.

Liberty Fund has made a concerted effort in the past several years to compile and publish the collected works of important twentieth-century thinkers, especially in the field of political economy. The latest volume to come forth, representing about one-third of Paul Heyne’s extant essays, may be one of its most important publications. It is convenient to have the works of authors such as Gordon Tullock, James Buchanan, and Armen Alchian available in a set of volumes. These authors, however, are familiar to most economists through their long history of publication. In Heyne’s case, however, even those of us who were acquainted with him for more than thirty years have seen few of his written works. Unlike other influential twentieth-century thinkers, Heyne wrote almost nothing for peer-reviewed journals and was satisfied to make his arguments in personal settings with small groups of people. Most of his essays were written for discussion at Liberty Fund colloquia, for remarks to be given at a conference, or for publication by invitation from the editor of a book or journal.

One can gain a sense of Heyne’s unusual career from the fact that he spent the majority of his academic life in a nontenured faculty position, eschewing the necessary steps to achieve promotion and tenure. He did publish a reasonably popular economic text, The Economic Way of Thinking, but even it did not compete in popularity with major introductory economics textbooks. These facts do not mean that Heyne was intellectually moribund; indeed, he was one of the most articulate and thoughtful economists of the twentieth century. His death in 2000 was a loss to the many people who had met and learned from him.

Because most of his ideas were transmitted through personal interaction or papers written for small conferences, and because he cared little for fame or fortune, the editors of this volume had to search through his papers to find most of his contributions to the field. Without Geoffrey Brennan and Anthony Waterman’s efforts, the ideas of this important thinker would not now be available to a broad audience.

Heyne’s perspective is especially important because of his unique background in both ethics and economics. He was an excellent economist, but his Ph.D. was from the University of Chicago Divinity School, and he continued to read widely in ethics, political economy, and theology throughout his lifetime. Thus, his writings are particularly effective in using his understanding to explain economics to ethicists, especially to Christian theologians.

Because Heyne believed that the positive-normative distinction that many economists make is false and that economics is profoundly normative at its very base, his essays can thoughtfully engage those who criticize the ethics of economics on their own grounds. Heyne draws a distinction between personal relationships and the impersonal workings of the market. He argues that most ethicists, with their focus on the actors’ intentions, fail to understand the impersonal nature of markets and the positive outcomes that result when people pursue their own objectives with little knowledge of others’ goals. The failure to understand the distinction between the personal and the impersonal keeps most ethicists from understanding how markets work and how a social-coordination system based on private-property rights and prices is both morally defensible and socially useful. In fact, in the world of impersonal market relationships, if everyone focused on the needs of others, the results would be disastrous: the system would “come to a halt, at enormous cost to all participants if they were to act consistently on the principle of advancing the welfare of the most needy or most worthy—rather than focusing on the accomplishment of their own personal goals” (p. 33).

Justice is nevertheless important, and Heyne developed a well-articulated standard of justice for the world of impersonal markets. Rule-coordinated behavior enables social cooperation to occur among people who do not know each other well, and the rules that work the best in this situation are “clearly defined and readily exchangeable property rights” (p. 178). Efforts to replace the rule of law with direct government intervention usually produce injustice. “The justice or injustice of a social system will not be found in the pattern of outcomes it yields—its end states—but in the procedures through which those outcomes emerge. This is simply the only kind of justice of which social systems are capable” (p.182).

A defense of markets and private-property rights must also deal with the Homo economicus assumption that economists use in explaining and defending the workings of the social-coordination process. Most ethicists and some economists believe that the basic model of analysis assumes that people act only from selfish and hence immoral motives. Heyne strongly disagreed, arguing that the operating assumption is one of purposive, not selfish, action.

In that system of social interaction we call a market economy, decision makers focus their attention on changing money prices. Their motives in doing so are infinitely varied and complex, and are no more likely to be selfish or otherwise morally objectionable than the motives of people at a church picnic or university lecture. The principle consequences of their behavior is ongoing mutual accommodation among millions of people who do not even know of one another’s existence, but who are nonetheless dependent on one another for the basic necessities of life as well as the innumerable luxuries to which they have become accustomed (p. 41).

Although economists focus on monetary measures of value, they do so because explaining how exchange works lies at the heart of their discipline, and the use of money greatly facilitates exchange. In making this argument, Heyne is also contesting another common assumption of economics—that the discipline is defined by its assumption of scarcity. He does not dispute that scarcity drives economizing behavior, but the interesting result is the process of exchange. In the right institutional framework, dealings across space and time occur, and people who know little or nothing about each other focus their attention on activities that work to the advantage of those unknown others.

Even though Heyne rigorously defended both markets and the economic way of thinking from most of the charges leveled against them, he believed that people should take seriously one cogent moral criticism of commercial society. Economists focus on the world of impersonal exchange, but it does not follow that the world of personal relationships is unimportant. Market dealings may give rise to the depersonalization of social relationships. Because of the ease of exit from social relationships that do not please us in our modern, price-coordinated world, our choices may cause us to move away from “those face-to-face institutions in which individuals are socialized and values are nurtured” (p. 77). This argument is not, in Heyne’s view, a reason for greater government intervention in the economy; in fact, most government actions only exacerbate the problem of maintaining social capital.

Although Heyne concentrated a great deal of his writing and speaking on the interplay of economics and ethics, he also made a substantial contribution to the teaching of economics. His text The Economic Way of Thinking was first published in 1973 and went through nine editions in his lifetime, and after his death, Peter Boettke and David Prychitko became coauthors. Owing to his textbook, Heyne became internationally famous as an innovative teacher of economics, and several essays in the volume edited by Brennan and Waterman summarize his approach to the pedagogy of economics. He believed that the economic way of thinking is a powerful and useful tool for understanding the world, but that only a limited number of concepts need be communicated to students in an introductory course. Most of these concepts can be articulated and used without the use of formal models, technical proofs, and elaborate graphs, which often cause the trees to hide the forest. His focus on the fundamental social-coordination process of markets and private property rights has influenced many economists, including me, to rethink fundamentally how they teach introductory economics.

I recommend Brennan and Waterman’s collection to anyone who is concerned with the ethical implications and the efficacy of different social-coordination mechanisms. Paul Heyne was one of the most thoughtful and articulate thinkers of our time, and we are fortunate to have access to his ideas in this collection of his essays.