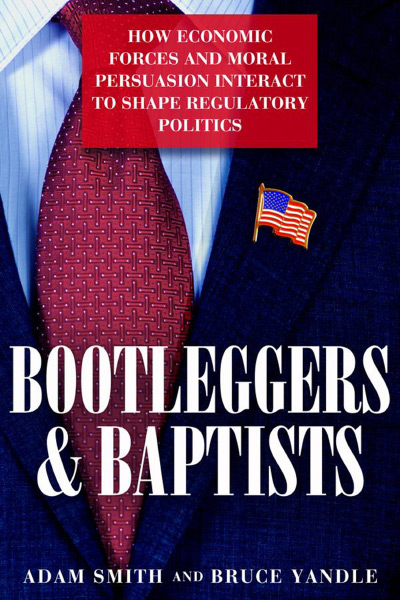 Bootleggers and Baptists
How Economic Forces and Moral Persuasion Interact to Shape Regulatory Politics
Adam Smith and Bruce Yandle
Kindle Hardcover
This book review appeared in the Winter 2014/15 issue of The Independent Review.

In 1983, economist Bruce Yandle offered an illustration in the journal Regulation that helped change the way economists think about public policy. Drawing on the history of Blue Laws and Prohibition, Yandle noted that public policies tend to be supported by “bootleggers,” who saw their incomes increase as a result of a particular policy (as bootleggers did under Prohibition and under Blue Laws), and “Baptists,” who supported public policies for moral reasons (Baptists tended to support prohibition and Blue Laws because they believed that alcohol was evil). Yandle used this illustration to explain some of the outcomes he observed during his “education (as) a regulatory economist” (“Bootleggers and Baptists: The Education of a Regulatory Economist,” Regulation 7, no. 3 [1983]: 12–16).

According to popular opinion and too many undergraduate textbooks, governments regulate in order to fix market failures. This public-interest view, though, does not begin to explain the regulations we see in practice, many of which are at best unnecessary and at worst actually destructive. In the new book, Bootleggers and Baptists, Yandle teams up with his grandson, an economist at Johnson and Wales University, to survey the theory and evidence and to apply the framework to cases such as the English Factory Act of 1833, health reform, tobacco regulation, and the Troubled Asset Recovery Program (TARP) of 2008. They present us with a convincing story for why bootlegger-and-Baptist coalitions emerge, why the phenomenon is stable, and why institutional constraints on governments are necessary if we are to avoid waste.

Smith and Yandle argue that successful regulation sometimes requires “a respectable public-spirited group seeking the same result [to] wrap a self-interested lobbying effort in a cloak of respectability” (p. viii). Occupational licensing in Alabama provides a recent illustration with which I have some personal familiarity. The Johnson Center at Troy University is releasing, chapter by chapter, a series of studies for a volume titled Improving Lives in Alabama. The first is Daniel Smith’s survey of the literature on occupational licensing, which argues that licensing restricts entry into the professions and raises incumbents’ incomes. Bootleggers responded swiftly and negatively, with representatives of different associations going to the media to say that regulation is about safety, not self-interest. Yet even if the people seeking regulation are doing it solely for the public interest, the fact remains that regulations stifle competition.

Smith and Yandle explain how we have evolved to form “Baptist” groups that sometimes unwittingly enable bootleggers. We are social creatures and political animals, and combining together to be part of something greater than ourselves is an important survival characteristic that emerged deep within our species’ past. They augment this evolutionary history by explaining how sociability interacts with voters’ incentives to remain ignorant (or to be “rationally irrational,” in Bryan Caplan’s phrase (The Myth of the Rational Voter [Princeton, N.J.: Princeton University Press, 2007]) and helps explain why we get the public policies we get: “Although it is necessary to provide Baptist cover, this cover need not be especially coherent in terms of standing up to intellectual scrutiny. Detailed scrutiny is usually the last thing on the public’s mind. Instead, all that is needed is a credible appeal to sympathy that the public can recognize as being trustworthy” (p. 65). It is a depressing conclusion if Baptist-and-bootlegger logic is part of our DNA.

Sometimes Baptists emerge from the grassroots, as in the case of literal Baptists who supported Prohibition and Blue Laws. Sometimes the Baptists are watered by bootleggers, who provide generous donations to such groups. Sometimes they are simply Astroturf groups created by special interests. I recall reading about firms that engage in “black ops” aimed at creating anti-Walmart Baptist coalitions, and I think there is a rich vein of research to be done on how bootleggers covertly engage and mobilize the Baptists. The bootlegger-and-Baptist world is one in which there is none righteous, no, not one: Smith and Yandle discuss Walmart’s entry into the rent-seeking society and its participation in the debate over the Affordable Care Act (ACA), a piece of legislation that might raise their rivals’ costs (p. 19). Among its ACA-related activities, Walmart gave a large donation to the Center for American Progress and signed a letter with both the center and the Service Employees International Union.

People will undoubtedly object to what they see as the implication that Baptists and bootleggers consciously join forces in order to get their favored policies. Literal Baptist preachers are likely to recoil at the idea that they are in cahoots with literal bootleggers. Smith and Yandle are clear, however, that they are not proposing that actual Baptists and bootleggers actually work together. Rather, public policies such as the Blue Laws emerge because a moral constituency (the Baptists) and a financial constituency (the bootleggers) come together in support of the same policies.

All hope is not lost, though, because people can overcome powerful coalitions. Smith and Yandle offer a compelling illustration with their story of the Baptist (Methodist) and bootlegger (bar owner) coalition that opposed the Salvation Army in London in the late nineteenth century. Here I learned a great deal that I didn’t know about the history of the Salvation Army as well. The Salvation Army harmed two interest groups. First, their hard-line stance against alcohol reduced the demand for booze and therefore hurt bars’ and pubs’ business. Second, the army’s unorthodox style of street ministry took members away from local Methodist congregations. It was, fortunately, the bootlegger-and-Baptist coalition that failed. Brewers and bar owners worked against the army through local government, and Smith and Yandle report that in some cases police officers (apparently in the employ of alcohol interests) refused to intervene when members of the Salvation Army were assaulted and battered in the streets. Meanwhile, the Methodists worked “for the enforcement of city ordinances that would require permits for religious parades and noisy street gatherings” (p. 17). The Salvation Army’s plight (and nonviolent tactics), however, caught the attention of the London Times, “which did not endorse the army’s activities but editorialized in favor of freedom of speech” (p. 17).

I would like to see more discussion of bootleggers who are in it not for the money but for the status and the power, but this request provides a jumping-off point for graduate students looking for paper ideas. People are willing to trade income for status or income for other amenities—consider the college professor who at least thinks he is taking a pay cut relative to what he could earn on Wall Street in order to enjoy the freedom and vigor of academic life—and in the rent-seeking society they may be willing to sacrifice their own income (and definitely others’) in order to have high status. Perhaps the bootleggers lobbying for a new downtown stadium are not just lobbying for something that will make them a lot of money. Perhaps they are also lobbying because they want their names engraved in the cornerstone or something like that. Bootleggers who wish to make their names great are almost certainly in abundance, and I think we can learn more about social change by learning more about them.

I am also less convinced by Smith and Yandle’s discussion of TARP, which they describe as being pushed by “a bootlegger without a Baptist.” My evidence here is anecdotal, but when speaking to a senior citizens’ group once, I criticized bailouts for banks and General Motors, noting that we could probably have had a sharp recession followed by a higher-growth recovery. Several in the audience objected that they didn’t have the time or the assets to weather a recession, which makes me think Baptists probably did have at least some influence on TARP, albeit perhaps at a more local level.

Even if you are a teetotaler yourself, you might find yourself wanting a stiff drink after reading Bootleggers and Baptists. Anyone who wasn’t already convinced that the Scottish Adam Smith was correct when he wrote “there is much ruin in a nation” will be convinced by Smith and Yandle’s tour through some of the more depressing neighborhoods in the rent-seeking society. I found myself in a familiar position throughout: looking over the broad sweep of history and wondering how any economic growth has ever taken place, anywhere. It is apparent from Smith and Yandle’s contribution that wherever economic rents can be created, we will find willing suppliers (elected officials and regulators) and willing demanders (Bootleggers). The authors crystallize another insight that Yandle offered more than thirty years ago—otherwise disinterested third parties arguing for policies as matters of justice and morality can enable special interests that are seeking wasteful public policy—and in this way, I hope, they provide a starting point for new research into how we can constrain Leviathan.