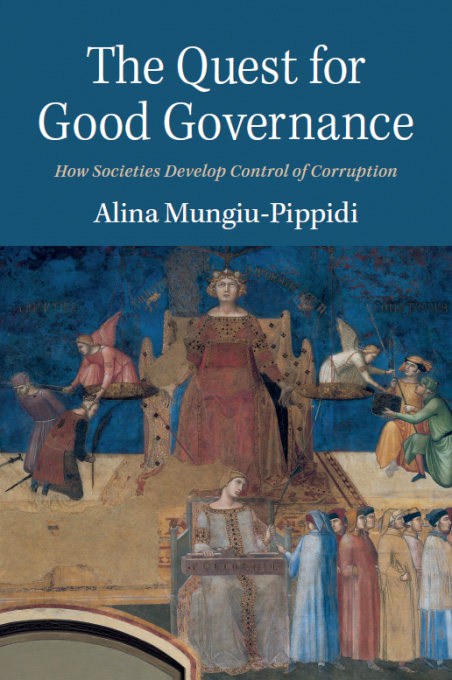 The Quest for Good Governance
How Societies Develop Control of Corruption
By Alina Mungiu-Pippidi
Kindle Hardcover Paperback
This book review appeared in the Fall 2017 issue of The Independent Review.

Corruption is usually thought of as a major impediment to development in poor nations. As a consequence, over the past two and a half decades the causes and consequences of corruption have been vastly studied. (See, for example, Daniel Treisman, “What Have We Learned about the Causes of Corruption from Ten Years of Cross-National Empirical Research?” Annual Review of Political Science 10 [2007]: 211–44, and Toke S. Aidt, “Rent Seeking and the Economics of Corruption,” Constitutional Political Economy 27, no. 2 [2016]: 142–57.) Corruption is also a major focus of international agencies, such as the World Bank. These agencies often use theories developed in academic research to guide policy decisions. Despite this focus on corruption and use of the research, successful anticorruption stories are not well known. When a country does successfully reduce its corruption, it is unclear that this success can be attributed to this voluminous body of research.

The difficulties in understanding and combatting corruption can be attributed in part to the fact that corruption is a multidisciplinary topic, causing much of the research to be conducted by academics with different specialties. Thus, it is possible that researchers in one field (e.g., economics) are entirely unaware of the findings discovered by researchers of other fields (e.g., political science), which is a problem because the studies conducted by researchers of different specialties are often complementary. In The Quest for Good Governance, Alina Mungiu-Pippidi utilizes research conducted in a variety of disciplines in an attempt to pull together some of these theories to understand how societies develop control of corruption. She links historical evidence obtained from case studies with broader theories and data, making for a uniquely dense study of how societies can reduce corruption and develop a norm of ethical universalism rather than particularism. In essence, her policy prescriptions boil down to the need to balance the incentives to be corrupt (opportunities) with the constraints that inhibit corruption.

Mungiu-Pippidi begins by defining corruption. This seemingly simple task is one of the major obstacles in corruption research. She shows in fascinating detail that there is a vast difference between how ordinary people understand corruption and how the international community understands it. This difference highlights one major flaw in the anticorruption community’s attempt to mitigate corruption: in highly corrupt countries, the anticorruption agencies believe that corruption is a deviation from the norm, whereas most citizens do not. In order to break the vicious cycle of corruption, policy makers need to be aware of this distinction. Reforms aimed at reducing corruption need to be consistent with the dominant social norm.

In fact, Mungiu-Pippidi shows that citizens are most concerned with corruption that does not involve bribery. This qualification is important because many anticorruption programs and corruption surveys focus exclusively on bribery. For example, the Organization for Economic Cooperation and Development’s Anti-Bribery Convention focuses specifically on combatting bribery of public officials. In addition, the World Bank’s Enterprise Surveys explicitly asks firms about the frequency of their bribe payments but does not give the same emphasis to other aspects of corruption. In general, there are many instances where the word bribery is used interchangeably with the word corruption. If bribery is only a small part of corruption, this lack of distinction could explain these anticorruption programs’ lack of success.

Some researchers argue against using corruption-perception indices because bribery is not a significant predictor for these indices (Dilyan Donchev and Gergely Ujhelyi, “What Do Corruption Indices Measure?” Economics & Politics 26, no. 2 [2014]: 309–31). Mungiu-Pippidi provides an interesting alternative way to deal with this lack of correlation. Rather than attempting to determine which measure is “correct” and which measure is “wrong,” an area of future research might involve exploiting the differences between the two measures. In doing so, it may be possible to establish a threshold where particularism, rather than ethical universalism, becomes the norm. Answering this question is actually Mungiu-Pippidi’s prescribed first step to a wellrounded anticorruption agenda.

Much of the book’s analysis relies on fascinating case studies of contemporary successful anticorruption efforts in Botswana, Chile, Estonia, Georgia, Slovenia, South Korea, Taiwan, and Uruguay. Although I agree that much can be learned from examining these success stories, I think the book could gain from also discussing detailed case studies of anticorruption failures or persistently corrupt societies. In particular, in addition to the discussion of democratic contemporary achievers (i.e., democratic countries that have recently established control of corruption), a discussion of democratic contemporary failures would have been beneficial.

Mungiu-Pippidi argues that the transition to democracy played a role in the control of corruption in all of the selected contemporary achiever countries. However, because all of the contemporary achievers were chosen for analysis based on the fact that they are electoral democracies, it is difficult to make that conclusion. Electoral democracy success stories are chosen over authoritarian state success stories because policies cannot easily influence the occurrence that makes a despot enlightened, but policies can help build a noncorrupt democracy. Although I am not disagreeing that electoral democracies are associated with increased control of corruption, I think it would be helpful to discuss the specific role that democratization plays.

Daniel Treisman notes that democracy may take decades to have any effect on the level of corruption (“What Have We Learned about the Causes of Corruption?”). By comparing successful and nonsuccessful case studies of anticorruption in democratic countries, a better argument may be made for the importance of norms. In other words, it is important to note that it may not be democracy that is causing a reduction in corruption; it may be a change in the norms of society—and changing norms takes a significant amount of time. However, a democracy enables these changes to take place over time.

A comparison between successes and failures with respect to corruption in democratic countries would also highlight the importance of other facets of government that are important in determining corruption levels. For example, democracy is often correlated with impartial legal systems. However, this does not mean that the rule of law is constant across democracies. If there are differences in corruption across democratic countries, it is possible that the difference in legal systems is a contributing factor. A similar argument can be made for having a well-grounded system of checks and balances. Both impartial legal systems and grounded checks and balances are emphasized in Mungiu-Pippidi’s book as vital factors in determining corruption control.

The book also uses cross-country empirical analysis to test some of the theories that arise from the case studies. A discussion of anticorruption success stories and failures would allow for a much better understanding of the empirics. For example, a major point that is derived from these successful case studies is that political power is important. In most successful anticorruption programs, there was a change in power that led to significant anticorruption reforms. This point is mentioned again in the empirical sections of the volume, where Mungiu-Pippidi discusses how power discretion is common in societies dominated by particularism. However, the reader never gets an example of where this power discretion is severe and persistent. In addition, power is never differentiated from discretion. For example, two democratic countries that presume to give politicians the same amount of power may also have very different levels of discretion. In addition to the basic correlation given in a regression, it would be interesting to see this phenomenon occurring in failure versus success comparisons of democratic countries.

Finally, the notion that modernization is necessary to reduce corruption seems to be implied throughout this book (see, for example, figure 4.2, p. 120). Although development may certainly help countries reduce corruption, it is crucial to understand where this development comes from. A misguided focus on the “Big Push” idea of foreign-aid policy as a way to get rid of corruption will only distract from the central point of the book, which is that corruption can be successfully controlled only when ethical universalism is the norm. If policy makers simply focus on “modernizing” a country, we would likely see the same anticorruption failures that we have seen in the past. This is not to say that reforms necessary to reduce corruption are not easier to implement in more developed countries; it is just to say that concentrating on modernization as a key determinant of corruption may be seen as a distraction to the book’s overall message.

Mungiu-Pippidi uses a multifaceted approach to describe the complicated path a country must travel to gain control of corruption. She uses historical evidence, theory, and data to help support her hypothesis. The main argument to take from this book is that the path away from corruption is long and complex. The only way for a country to achieve its anticorruption goals is to change the norms of society so that they are consistent with ethical universalism. Anyone interested in political corruption would greatly benefit from reading this book.