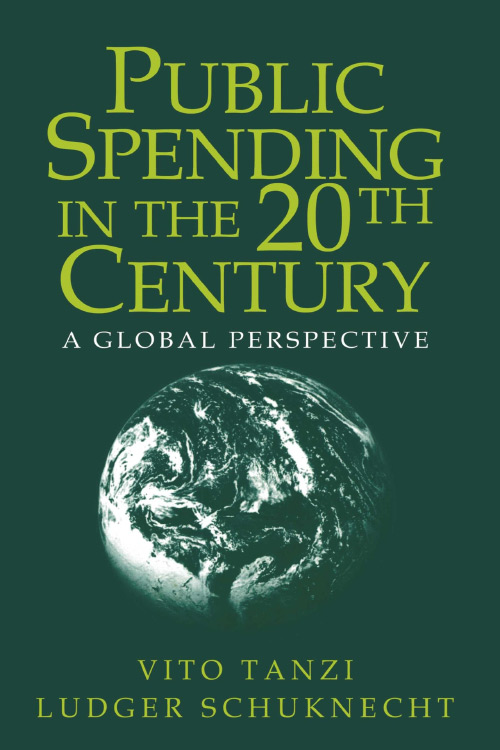 Public Spending in the 20th Century
A Global Perspective
Vito Tanzi and Ludger Schuknecht
Kindle Hardcover Paperback
This book review appeared in the Spring 2003 issue of The Independent Review.

Nowadays there is a plethora of research reports in journals and edited volumes on why government grows. Most of these reports, including several of my own, competently address the professional scholar or policy analyst well versed in theory and familiar with the data. They tend to concentrate on fairly technical methods of attributing causes and assessing degrees of contributions.

It was not always thus. More than four decades ago, Francis Bator authored a popular fiscal history, The Question of Government Spending (New York: Harper & Row, 1960). Its subtitle, Public Needs and Private Wants, hinted at its normative biases, but it had the virtue of being an easy read for the intelligent lay person because it used a simple theoretical framework to make sense of the well-presented data.

Not much was added to this popular literature in the next three decades, save for a book devoted to the U.S. experience (Edwin S. Mills, The Burden of Government [Stanford: Hoover Institution Press, 1986]) and a few volumes by Europeans (for example, M. S. Levitt and M. A. S. Joyce, The Growth and Efficiency of Public Spending [Cambridge, U.K.: Cambridge University Press 1987], and J. A. Lybeck and M. Henrekson, Explaining the Growth of Government [Amsterdam: North-Holland, 1988]) that looked at public spending among Organization for Economic Cooperation and Development (OECD) countries. Even these general-interest volumes required a knowledge of economics beyond that possessed by the average well-educated lay reader.

Now, however, Vito Tanzi and Ludger Schuknecht have directed their analysis and their provocative hypotheses to a general audience, all the while detailing interesting numbers for the most part by comparing the average percentage of gross domestic product (GDP) attributed to government of seventeen wealthy countries—the United States, the United Kingdom, Germany, Switzerland, and so forth—from the 1870s until today. Their finding that government’s share in GDP has quadrupled in that time immediately catches the reader’s attention, and they delve sufficiently deep into data of key subperiods to draw some interesting and unusual inferences. Unlike previous analysts, Tanzi and Schuknecht place a great deal of weight on ideological factors in conditioning public choice, but they are wholly aware of the more garden-variety factors such as “Baumol’s cost disease” (in which the relative price of public services rises by almost 1 percent per year relative to goods in the private sector) and Wagner’s law (a nineteenth-century hypothesis wrongly claiming that governmentally financed goods have income elasticities greater than one). Because it is now well known that the Baumol and Wagner effects explain less than half of the rise in public spending (see C. Holsey and T. E. Borcherding, “Why Does Government Grow?” in Perspectives in Public Choice, edited by D. Mueller, 569–90 [New York: Cambridge University Press, 1997]), most of Tanzi and Schuknecht’s compact book examines composition effects to get some purchase on the subject based on questions of changes in interest-group and welfare-state politics, deficit financing, demographics, and the like.

Probably the most interesting point made in the book is that although government’s growth relative to the economy as a whole has been dramatic since the late Victorian era, the fraction of GDP absorbed by government has almost stopped growing since 1980 both in the United States and in other wealthy OECD countries. Of course, the authors also show some interesting departures from the overall trend in the subperiods between 1870 and 1980: a stationary relative size from 1870 until World War I; a huge ballooning of government’s share during the Great Depression and World War II; and the significant budget push in what the authors call the Keynesian era of the 1960s through the 1970s. In various chapters, they consider factors that plausibly might explain these perturbations and plateaus, though theirs is an “analytic narrative,” not an exercise in positive social scientific analysis.

Unlike most fiscal analysts, Tanzi and Schuknecht concentrate on explicit and implicit fiscal rules and changes therein caused by the politics of fiscal choice. The authors also take time to examine both developing countries and those going through transitions from socialist dictatorships. They seem to be familiar with the entire range of the analytic literature, though none of the “techy” modelings underlying this literature are revealed in any detail. This sort of exposition is probably wise because such inclusions would cause the nontechnical reader’s eyes to glaze over and are unnecessary for those already anointed. Tanzi and Schuknecht do develop the theoretical notions intuitively, however, which is more important, and their bibliography will be particularly helpful for the neophyte scholar. Their index is quite comprehensive, and both lay and professionally sophisticated readers might start their study there after a quick reading of the initial and final chapters.

One interesting and unique element of this volume is the authors’ attention to regulation. They are aware that governments have two instruments in carrying out policy: taxing and spending—or fiscal policy, which is the subject of their book—and regulation, which, as Richard Posner first noted (“Regulation by Taxation,” Bell Journal of Economics 83 [October 1971]: 22–50), has fiscal-like effects. They treat the two instruments as substitutes but offer no proof that they are substitutes. In fact, as S. Ferris, A. Garzoni, and I have shown (“The Growth of Real Government,” in Handbook of Public Choice, edited by R. Wagner and J. Backhaus [London: Edward Elgar, forthcoming]), the two factors are as likely to be complements as substitutes. That matter aside, the authors indicate that excluding regulatory impacts from national-income accounts seriously understates the relative size of the state. This statement is probably even more applicable to poorer countries than to the richer ones.

I predict that Public Spending in the 20th Century is going to be just as much a “must read” book for those who start their research today on why governments grow as Bator’s Question of Government Spending was for my generation. The wealth of descriptive data and the authors’ fresh and lively style make this book very readable. The final chapter, on fiscal reform in the seventeen countries studied as well as in a few less-developed countries, is remarkably salient. After all, if Adolph Wagner had been right about how things work, the size of the public sector would be vastly larger today than it actually is—and thus all the carping about the actual, smaller budgets would be inexplicable. Fiscal reform movements suggest, instead, that we still have much to learn about why the public sector grows. A copy of Tanzi and Schuknecht’s work should be on the desk of all policymakers who believe, as I do, that the institutions of fiscal choice really matter.