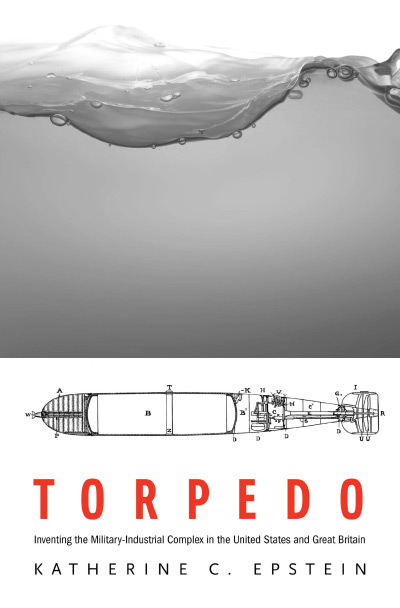 Torpedo
Inventing the Military-Industrial Complex in the United States and Great Britain
Katherine C. Epstein
Kindle Hardcover
This book review appeared in the Fall 2014 issue of The Independent Review.

In Torpedo: Inventing the Military-Industrial Complex in the United States and Great Britain, Katherine C. Epstein demonstrates that she is a very thorough historian with a wide and deep knowledge of military history. Her book provides a very detailed account of the history of torpedo manufacture prior to World War I. For those who have an interest in the evolution of the naval powers of the United States and Great Britain in the prewar era, Torpedo is an excellent historic piece that reviews the changing nature of naval technologies and the process of secondary change that must then follow in both complementary technologies and military tactics. For example, Epstein provides multiple examples throughout the book of how the increasing range of the torpedo influenced a fleet’s operational strategy (pp. 101–2) and the type of vessels desired by the U.S. or British navy (pp. 101–2, 189–90).

Though the historical work on the torpedo is both detailed and enthralling, Epstein attempts to do more with this book than simply expound on a specific weapon system. As the subtitle of Torpedo indicates, Epstein desires to use the weapon system and its technological and manufacturing advances to show how the torpedo industry was instrumental in creating the early foundations of the modern-day military-industrial complex in both the United States and Great Britain. In order to flesh out this foundation, she explores the late-nineteenth- and earlytwentieth- century intertwining of (1) the Bliss Company and the navy’s Torpedo Station in the United States and (2) the Whitehead Company and the governmentowned Royal Gun Factory (later known as the Royal Naval Torpedo Factory) in Great Britain. The companies and their respective governments became entangled during this period as each strived to be at the vanguard of torpedo manufacturing. The mechanism of this intertwining, according to Epstein, was the confluence of intellectual-property rights of jointly produced torpedoes. The key lever deals with the nature of military funds. Epstein argues that the creation of command technology, whereby “firms had to ‘command’ inventions from the top down and from within” and “governments came to ‘command’ weapons technology from the private sector and to treat firms as quasi-state agents,” was a necessary outcome of “an otherwise unpredictable and unreliable inventive process” stemming from a lack of funds necessary for private actors to engage in such entrepreneurial technology discovery (pp. 174–76). As the state in both the United States and Great Britain became more involved in both finance and technological experimentation and design through the Torpedo Station and the Royal Gun Factory, respectively, the lines between public and private intellectual property became blurred. Was the advancement in torpedo range and accuracy due to the private firms’ innovation or to the involvement of state agencies and actors? Epstein argues that the blurring of lines at the heart of this central question is what ultimately led to the militaryindustrial complex.

Although the partnership in production did exist, Epstein ultimately does not achieve her goal of showing that the military-industrial complex emerged from the torpedo-production process. Certainly there are hints of future problems that would have to be addressed, but within the existing work they remain hints. The claim that the military-industrial complex is due solely (or even principally) to the purchase agreements between the military and private firms is something of a stretch. In describing the military-industrial complex as it emerged in the post– World War II era, Walter Adams argues that the “complex is not a conspiracy between the ‘merchants of death’ and a band of lusty generals, but a natural coalition of interest groups with an economic, political, or professional stake in defense and space. It includes the armed services, the industrial contractors who produce for them, the labor unions that represent their workers, the lobbyists who tout their wares in the name of ‘free enterprise’ and ‘national security,’ and the legislators who, for reasons of pork or patriotism, vote the sizable funds to underwrite the show” (“The Military-Industrial Complex and the New Industrial State,” American Economic Review 58, no. 2 [May 1968]: 655). As illustrated by this analysis, the military-industrial complex comprises more than just the interaction between the navy and the industrial researchers creating the torpedo or any other technology. Yet Epstein does not move beyond the surface of this connection and narrowly focuses on the relations between industry leaders and naval command.

It is true that patent and copyright issues emerge when there is technological feedback between a buyer and a seller, but such issues in and of themselves do not lead to a sustained complex and the permanent war economy that accompanies it (see, for instance, Seymour Melman, The Permanent War Economy: American Capitalism in Decline [New York: St. Martin’s Press, 1985], and Thomas K. Duncan and Christopher J. Coyne, “The Overlooked Costs of the Permanent War Economy: A Market Process Approach,” Review of Austrian Economics 26, no. 4 [December 2013]: 413–31). Torpedo manufacture was often experimental, and there was some controversy over pricing experimental technology at times (pp. 71–73, 137), but other necessary conditions for a foundation of the military-industrial complex were absent. For example, Epstein mentions unions’ employment concerns and the labor movement only once (p. 115) and without offering much detail as to their influence. She briefly explores the desires of Congress (pp. 101–2), but Congress fell on the side of reducing the navy’s budget as opposed to a lobby-driven desire to expand or maintain spending levels. In fact, political lobbying does not manifest itself clearly in the book in any fashion.

Much of what Epstein provides to make her case is actually evidence that government agents were attempting to reduce what it owed to private firms rather than evidence that there was a functional synthesis between the two. Whereas Adams describes the rise of the complex from the situation in which, “having dismantled the arsenals it did have, the government is forced to buy what it no longer can make” and government “confronts powerful oligopolists in a market where technical capability rather than price is the controlling variable” (“The Military-Industrial Complex,” 655), Epstein shows that there was no lack of competition in the torpedo industry. In fact, competitive tactics were explicitly used to incentivize cheaper and better production from the industries. Great Britain allowed its Royal Gun Factory to continue production alongside the Whitehead Company and even invited more competition into the market in order to keep the company in line with price and quality (p. 42). The United States employed a similar strategy as it moved to government production (p. 174) and allowed the Whitehead Company to remain a steady competitor with the Bliss Company (pp. 85–92).

Not only did both the United States and Great Britain retain torpedomanufacturing capability expressly and intentionally through their respective arsenals, but the two nations also allowed for the international competition between each of the private firms as well as other less discussed firms (pp. 137–40) in order to keep quality and costs lower. Furthermore, Epstein herself notes that the United States even attempted to avoid paying for the Bliss Company’s torpedo advancements, demanding that they be turned over to the government for reasons of national security (pp. 42, 160–61). In none of these arrangements does there appear to be any solid assurances between industry and the military that would lead one to believe that an iron triangle of vested interests was forming in torpedo manufacture. It could be argued that rather than showing the formation of the militaryindustrial complex, Epstein is making a rather compelling budgetary case for an open international arms trade. It was the open competition of selling between the United States and Great Britain that allowed the Bliss Company and the Whitehead Company to thrive and create advances in torpedo technology, and it was the open competition between the nations buying from the Bliss Company and the Whitehead Company, among others, that allowed defense budgets to remain lower. The only documented financial problems seemed to appear when the United States attempted use the National Defense Act to close the open market on the Bliss Company’s sale of arms (pp. 153–56). Yet again, however, this account is not one of a valued partnership between the military and industry, but of conflict between the two over contract fulfillment.

In summation, Epstein’s work is a fantastically detailed account of the history of torpedo manufacturing in the pre–World War I era. For those who are interested in the interaction between technology and tactics or just more generally interested in military history, Torpedo: Inventing the Military-Industrial Complex is strongly recommended. However, if a researcher is interested in a case study of the formation of the military-industrial complex and the political economy analysis that would come with it, he or she should look elsewhere.