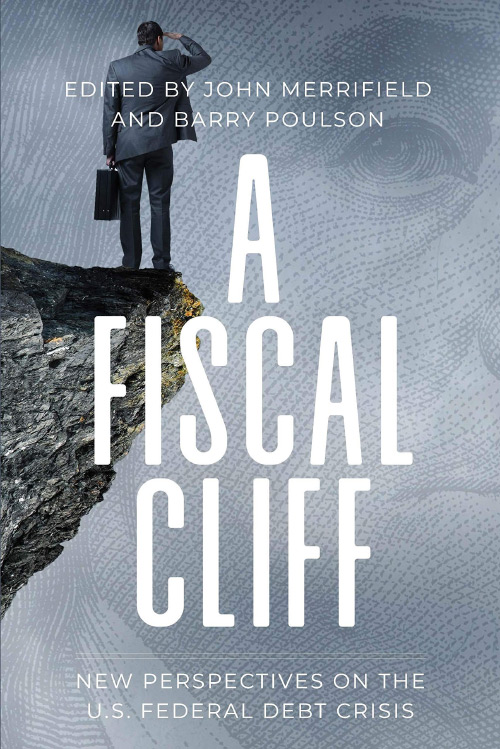 A Fiscal Cliff
New Perspectives on the U.S. Federal Debt Crisis
Edited by John Merrifield and Barry Poulson
Kindle Paperback
This book review is a web exclusive for the Summer 2021 issue of The Independent Review.

Editors John Merrifield and Barry Poulson have assembled an impressive group of scholars who have contributed twenty chapters on the U.S. fiscal debt crisis. The chapters address the magnitude of the crisis, its consequences, and what, if anything, can be done to pull the country back from the “fiscal cliff.” The volume will be of interest and use to academic economists, policymakers, and members of the public who have a concern about the U.S. fiscal condition.

Of anecdotal interest, the meaning of “fiscal cliff” has not been constant across time. According to BuzzFeed news (The Strange 46-Year History of the Term ‘Fiscal Cliff’), the term originated in 1966 when writer-producer Carl Foreman presented Hollywood with a “fiscal cliff-hanger,” when deciding on whether to film his upcoming Western, Mackenna’s Gold, in the United States or Spain. (In the end, Foreman chose the U.S.) But from the wild west to the wilds of politics, the media and politicians applied the catchy term to the fiscal crises of the Lyndon Johnson administration, New York City, and, with increasing frequency, rising U.S. debt levels in the early 2000s. Nonetheless, by the second decade of the twenty-first century, Ben Bernanke and others who feared a derailed recovery from the Great Recession changed the meaning of the term to refer to the consequences resulting from the expiration of the George W. Bush tax cuts and from spending cuts via sequestration.

In choosing David Walker, U.S. Comptroller General from 1998 to 2008, to write the forward, editors Merrifield and Poulson make clear that the intended meaning of “fiscal cliff” in this volume is that of the chronological middle of the brief linguistic history given above: that of a debt crisis. In Walker’s brief opening to the book, he lays out the book’s foundational principle that the U.S. fiscal condition is poor and worsening because of mandatory spending and a lack of institutional restraint. A “day of reckoning” is coming, he writes, and “(d)oing nothing is not a viable option” (p. xiii).

Several chapters in the book highlight the dire fiscal condition of the U.S. government and the incumbent consequences. Of note, after an opening overview by Merrifield, the second chapter by Chris Edwards provides a history of the U.S. fiscal condition dating to the founding of the country, a history that is repeated by Dwight Lee in the book’s final chapter. Both chapters show the historical highs of recent debt-to-GDP ratios, highs that look especially notable on a line chart when the only comparable debt-to-GDP ratios occurred in the 1940s as a result of the vast expenditures necessary to fight World War II.

I am compelled to point out that although the editors and authors (like the rest of us) could not have anticipated the coronavirus that wreaked havoc on the country’s finances, the book’s release is unfortunately timed. As the Congressional Budget Office’s 2021 Long-Term Budget Outlook makes clear, if the country’s fiscal condition was dire as the book was rolling off the press, it is much worse now in the wake of the pandemic. What would the authors have written had the book been released even a year later? The introduction mentions the pandemic as does Romina Boccia in chapter five. The former anticipates a 20 percent increase in government debt, but Boccia wonders if the pandemic crisis might evoke meaningful fiscal reforms. Regrettably, the reforms Boccia hopes for have not been forthcoming; rather the policy responses to the pandemic have exacerbated U.S. fiscal problems.

Numerous chapters in the volume, particularly the overview by Merrifield and the historical analysis by Edwards, discuss the consequences of government debt: possible default, inflation, crowding out, slower economic growth, and restricted use of countercyclical fiscal policy in future recessions, among others. These consequences will be familiar to many readers of the volume.

Baker Spring offers a novel proposal by suggesting a constitutional convention with the sole purpose of addressing budgetary concerns through the Compact for America initiative. Short of this, says Baker, pressure on the Treasury market will grow until investors will be unwilling to finance U.S. government debt, or at least unwilling unless compensated by higher interest rates.

Xavier Debrun and Lars Jonung argue that fiscal policy rules that set targets for debt, deficits, and expenditure growth can work if they are transparent and well-monitored, but acknowledge that fiscal policy rules present a “trilemma” between simplicity, flexibility, and enforceability. We can only have two of three. In the end, the authors recommend a “fiscal Taylor rule” that aims for debt sustainability, while allowing for cyclical stabilization policy.

Merrifield and Poulson, however, are not so sanguine on Debrun and Jonung’s advocacy of a fiscal Taylor rule and offer their second-generation fiscal rules that target deficit- and debt-to-GDP ratios that are low enough to be sustainable but high enough for policy responses to economic shocks, all the while keeping the fiscal eye on the long-term goal of a sustainable debt-to-GDP ratio that, once reached, would be upheld by cyclically balanced budgets.

Ed Dolan also emphasizes fiscal sustainability, an approach that, as he acknowledges, has parallels with environmental sustainability. As he closes his chapter, he offers a definition of fiscal sustainability as “a set of rules for taxes, expenditures, budget balances, and liabilities that allows the present generation to meet its economic needs without compromising the ability of future generations to do the same” (p. 140).

Then there is the important question of how borrowed resources are used. Richard M. Salsman proposes a return to the Golden Rule of Public Finance, in which government borrowing must be for productive assets, a rule that has been undermined as a relic of a past era and by an ever-elastic definition of public investment that now includes spending that in the past would have been considered public consumption.

Barry Poulson, Ryan Bourne, and the first chapter by Boccia supplement the analyses of fiscal policy rules by offering an international perspective. Some countries, such as Switzerland and Sweden, have been relatively successful, but others, such as Chile and the United Kingdom, have succumbed to pressures to circumvent rules and raise spending. A common thread in these analyses is that countries where fiscal rules have worked have consensus and public buy-in, and it may be that consensus and buy-in are more important than the rules themselves.

Other contributors take more of a micro-view of the problem and reforms to address it. John Garen takes on Social Security and Medicare, with a clear-cut analysis that capping these entitlements is essential if the country is to get its fiscal house in order. Nick Loris offers a different strategy, the privatization of federal mineral assets. Yet, as Loris acknowledges, revenues from government assets are not a substitute for “meaningful structural reforms” (p. 231), and I would add that the current political winds blow strongly against an increased use of fossil fuels. Another proposal by Justin Bogie is to raise the standards for and rein in disaster and emergency spending that Congress uses to evade spending limits. In their second contribution to the volume, Merrifield and Poulson call for a return to true federalism in which the federal government returns to a “no-bailout” rule for state and local governments that have developed a “fiscal dependency” (p. 375) on it.

In her second contribution to the volume, Boccia lays out improvements to the budgetary process, including the duty of Congress to actually pass budget resolutions and appropriation bills every year and to do so with an honesty and transparency that enables the public, the press, and watchdog organizations to hold it accountable.

The common thread in all these chapters is an emphasis on imposing constraints on government to change fiscal behavior. But these analyses beg the question of why Congress is so fiscally irresponsible. No doubt acceptance of Modern Monetary Theory by many members of Congress, whether tacit or acknowledged, plays a role, and my only serious criticism of the book is that it lacks a chapter critiquing this idea.

This said, chapters by Richard E. Wagner and David J. Hebert address this question through the lens of democratic budgeting, a process that is not equivalent to individual budgeting and so is not reducible to rational choice. What this means practically is that decisions on authorization, appropriation, and revenue bills are not dependent on each other. In addition, spending and taxing decisions create winners and losers, and ideology matters to both, since neither they, nor voters experience the consequences of their choices. As to liability, it is contingent since it may be shifted among taxpayers.

As I read the book, I recalled my early days as an assistant professor at Presbyterian College. In graduate school, my encounters were almost strictly with other economists. At a small, liberal arts college, I found myself around colleagues from a host of disciplines. When talking with many of these, I found that we couldn’t communicate when talking about public policy. I thought in terms of constraints; they thought in terms of changing morality, heart, or will. We talked past each other. I think we were both wrong, in part. Constraints do matter, but so does the human will and morality. Ropes may have bound Odysseus to the mast when sailing past the Sirens, but his will instructed his crew to bind him.

Wagner and Hebert refer to fiscal morality as “the old-time fiscal religion”—a morality that died in the aftermath of the Great Depression and Keynesian revolution. As Phaup puts it, the “existential question for democratic governments . . . is whether elected authorities can enact and enforce limitations on themselves” (p. 308), limits that are difficult to implement in a United States that has changed from a “constitutionally limited liberal republic to a relatively unconstrained illiberal democracy” (Salsman, p. 324).

Is there hope for controlling U.S. government spending? Fittingly, Lee places his hope in an ideological shift to a “mistrust of centralized government in response to the increasingly irresponsible fiscal policies of the federal government” (p. 406). Might expressive voters feel good about averting a fiscal crisis, reducing dependence on government, and protecting liberty and prosperity? Let us hope so, for as Carmen M. Reinhart and Kenneth S. Rogoff (This Time Is Different: Eight Centuries of Financial Folly, Princeton: Princeton University Press, 2009) remind us, from a historical perspective, sovereign defaults are hardly rare and the consequences are severe. The fiscal cliff is real, and the United States is careening toward the edge.