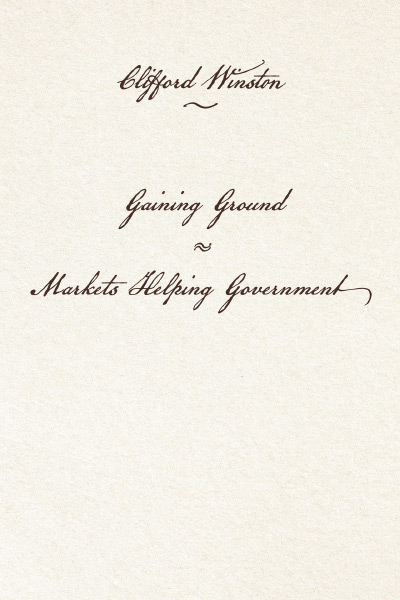 Gaining Ground
Markets Helping Government
By Clifford Winston
Kindle Paperback
This book review is a web exclusive for the Fall 2022 issue of The Independent Review.

In 1977, then chairman of the President’s Council of Economics Advisors, Brookings economist Charles L. Schultze, published a bombshell of a book, The Public Use of Private Interest (1977, Washington, D.C.: Brookings Institution). The book was based on a series of lectures Schultze had delivered the year before at Harvard. Its purpose was to show how by channeling and harnessing market forces government could become more effective and efficient in achieving its goals. The book focused on federal regulation, and its description set the stage thusly:

According to conventional wisdom, government may intervene when private markets fail to provide goods and services that society values. This view has led to the passage of much legislation and the creation of a host of agencies that have attempted, by exquisitely detailed regulations, to compel legislatively defined behavior in a broad range of activities affecting society as a whole—health care, housing, pollution abatement, transportation, to name only a few. Far from achieving the goals of the legislators and regulators, these efforts have been largely ineffective; worse, they have spawned endless litigation and countless administrative proceedings as the individuals and firms on who the regulations fall seek to avoid, or at least soften, their impact (emphasis added).

Charles Schultze was not optimistic about the prospects for what might be termed market-enlightened regulatory reform.

Now, forty-five years later, another Brookings economist, Clifford Wilson, has given us a more extensive treatment of how government might more successfully employ market forces to serve the public interest. Reaching beyond economic issues, Winston addresses broader social goals, like reducing poverty and perceived labor market inequities, and shows how harnessing market forces could improve public policies in those areas, too. We might optimistically expect Winston’s review of the topic to report significant progress after considering Schultze’s assessment. But I must quickly note that Winston, like Schultze, is not optimistic about the prospects for improving things. We might wonder why, after forty-five years, so little progress seems to have been made and why the idea of making public use of market forces to achieve government goals is perhaps seen as being even more problematic now than in 1977. I offer more on this later.

On a personal note, I should point out that Schultze’s earlier book was not a heavily documented academic treatise, like the Winston volume, but its contents fed lots of conversation among members of the White House staff. At the time, I was a senior economist on the staff of the President’s Council on Wage and Price Stability working with a small group—about eight other economists as I recall—under the leadership of James C. Miller III. We were reviewing and commenting on newly proposed federal regulations and attempting to apply market logic in making the final rules more cost effective. That small group, then called the Regulatory Analysis Review Group, was the forerunner to what is today the Office of Information and Regulatory Affairs, which is part of White House staff.

For more than four decades since then, economists, lawyers and other policy analysts have worked to bring to bear market logic on public sector actions. All who have been a part of this enterprise understand the difficulties involved; any successes involve overcoming the overwhelming forces of rent-seeking behavior. Those involved generally accept the notion that market forces playing through the political process, what may be called the forces of Public Choice, drive toward outcomes that redistribute income in favor of the regulated. This leads to the general conclusion that one should not expect to find efficiency when reviewing past government actions, but rather redistribution to rent seekers who successfully use the political process in their search for increased wealth. To expect otherwise is to look for love in all the wrong places.

Clifford Winston’s book might helpfully be viewed as a vastly expanded and annotated version of the earlier Schultze treatise. Indeed, it is even more than that, for Winston’s extensive survey of empirical work, with 31 pages of references, is a report on Winston’s ongoing Brookings enterprise that will continue to provide scientific evidence for the possibilities of using private interests to service public purposes. I note that Winston spills no ink in discussion of theories of government and so does not deal with the seemingly popular notion that elected officials are primarily motivated to serve the public interest, that upon taking their oaths office, they are marginally transformed from being ordinary mortals that more often than not are understood to serve their own interests, somehow specified, yet in their rebirth will walk away from the special interest forces that may have indeed helped them gain office in the first place.

Yet George J. Stigler’s (1971, “The Theory of Economic Regulation,” Bell Journal of Economics and Management Science 2: 3–21) competing idea that the behavior of politicians is best understood by following the money generated for special interest groups who gain political favors might better explain why market-based efficiency-enhancing rules and regulation get short shrift when political behavior is examined closely. Even during Stigler’s day, and certainly since then, we who have struggled with regulation reform have learned that politicians face a heavy opportunity cost when they try to divert their energies away from serving the special interests who keep them in office in an effort to apply those energies to serving the public interest.

Put another way, there is no meaningful political constituency or voting block that struggles to make the world more competitive. Indeed, just the reverse seems to prevail. The important political interest groups seem dedicated, more often than not, to eliminating competition, to having resources redistributed in their direction, and to regaining ground that, in their opinion, is richly deserved. On occasions, of course, it is possible that improving efficiency through the use of the market process coincides with achieving a special interest group’s rent-seeking desires. President Carter’s 1975 promise to deregulate natural gas pricing to get Louisiana’s nomination vote, may be an example. Massachusetts senator Teddy Kennedy’s successful effort to champion airline deregulation, since doing so provided massive gains to ordinary Americans, could be another example. The removal of tariffs on China-produced solar panels by President Biden so that a U.S. industry can improve its output and profitability, if successful, could be another possible example.

How Winston Sees the Challenge and How the Book is Organized

Rather than heralding how economics might address today’s swirling political cauldron, the book is more defensive of the role economics now plays in the process. Early on, the book notes that economists and any who speak favorably of capitalism are generally not respected in Washington’s Progressive world. In a way echoing Schultze, Winston speaks to the challenges faced by those who wish to apply economic logic to regulatory decision making—or to any part of government. He points out that the ongoing Washington policy debate:

does not account for the accumulated empirical evidence on the efficacy of market forces and government policies to accomplish the nation’s goals. This book fills that gap by synthesizing the available evidence and by arguing that, in contrast to current dissatisfaction with markets, American society has gained ground when government has allowed markets to help accomplish...economic and social goals, especially when government policies have made little progress in achieving those goals. I further argue that society could gain even more ground if government removed constraints, which would enable markets to play a greater role in the process (p. 6).

Winston’s timely and provocative book has four major parts. I point out that each part contains common components as well as excellent analytical tables. Part I addresses how attention to market forces could help improve achievement of economic goals. Chapters in that part address antitrust and anticompetitive behavior, improved flows of information, and deal with external costs like pollution, traffic congestion and airport noise, enhancing innovation and discovery of improved technologies. Part II focuses on achievement of social goals and considers poverty, discrimination in labor markets, and, an old topic, enhanced production of merit goods, which means goods and services that are deemed to be socially desirable by authority figures. The book’s third part offers a synthesis for the reader to consider, an effort by the author to explain why market forces, after so many years of study and analysis, occupy an inferior seat at the table when policy choices are being considered. Finally, the last part of the book provides a hard-hitting analysis of federal government failures to deal effectively with the COVID pandemic, this in spite of the fact that recent such public health experiences made it clear that the nation was ill-prepared for dealing with precisely such an emergency. Here Winston applies lessons learned from his account of past regulatory failures and discusses how what must be termed amazing market responses that led to rapid identification, production, and delivery of COVID vaccinations emerged, this in spite of dismal White House leadership and confusion within the ranks of the nation’s chief healthcare agencies.

Clifford Winston has provided an excellent and extensive treatment of the U.S. regulatory state, one that is replete with summaries of empirical work that sheds important light on the relative effectiveness of countless regulatory efforts and how market forces might be employed to improve outcomes. The work obviously represents a dedicated effort on the author’s part, an effort that will be continuing along with his productive professional career. Upon reading the book, one is not left with the feeling that better days are in the offing for market-based reforms. However, one is left with the feeling that the evidence and logic Winston has assembled will have a useful and future valuable effect in the ongoing regulatory struggle.