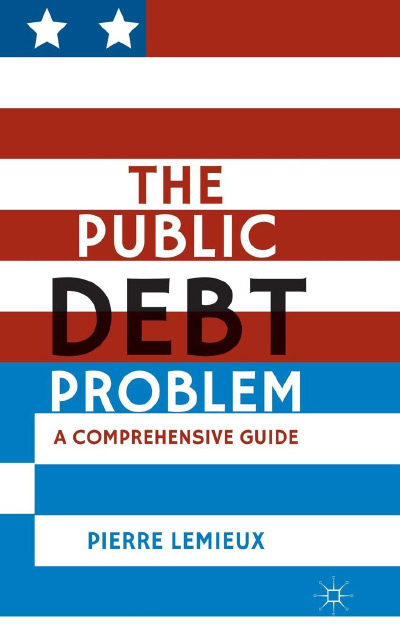 Styled as a comprehensive guide to the public-debt problem, this book lives up to its title. Chapter 1 introduces the issue, explaining what the public debt is and how it has become a problem over the past half century. At one time, balancing the budget was viewed as a component of responsible governance, but since the popularization of John Maynard Keynes’s ideas the political class has interpreted the lessons of Keynes to imply that running a deficit is justified as an economic policy to stimulate a sluggish economy. This interpretation has led to continual deficit finance and an increase in the public debt. Chapter 2 explains the details of the debt’s components and how large it has grown. This background is factual, accurate, and clearly explained.

Chapter 3 offers lessons from Europe and elsewhere. Pierre Lemieux explains that the public-debt problem predates the recent recession and notes that despite the view that government debt is a safe investment, many governments throughout the world and throughout history have defaulted on their debts. He says, “It is a mistake to think that sovereigns are not greedy. . . . Sovereigns, like ordinary individuals and corporate bodies, default when it is in their interest to do so” (p. 38). He quotes Otto von Bismarck, who justified the welfare state because it is a humanitarian institution, but also because it buys support for government and is “‘undertaken for the preservation of the state itself’” (p. 39). Lemieux observes, “Public debt can accumulate over decades without apparent detrimental effects, but when it reaches a certain threshold, an avalanche of problems suddenly starts rolling” (p. 43).

Chapter 4 links the public-debt problem to the growth of the welfare state and shows that the U.S. welfare state is very similar to the European welfare state. Chapter 5 provides evidence that the current trajectory of revenue and expenditures is unsustainable. Although chapter 6 notes that the United States is below the Organization of Economic Cooperation and Development average in taxation, Lemieux questions the legitimacy of the tax burden and argues that it would be difficult to collect enough in taxes to finance the welfare state anyway. Just by taking a look at the numbers, we can see that we cannot continue down the path we are currently following.

Chapter 7 looks at the synergistic relationship between banks and governments. Banks buy government debt with money deposited in them by trusting citizens. Many banks historically were chartered by governments specifically to raise money for them, and banking laws provide protections and profitability to banks in exchange for a ready source of financing. Lemieux says, “Banks, even nominally private, often look more like branches of the state than like private companies” (p. 101). He also notes the substantial amount of federal debt that is held outside the country, with China holding more than any other country. “By becoming one of the main bankers of the US government,” he points out, “the Chinese state has gained a potential weighty voice in American foreign and economic policy” (p. 106).

Having outlined the problem the public debt poses, Lemieux looks in chapter 8 at the possibility of addressing it by reducing federal expenditures and offers a pessimistic assessment. Everything in the current federal budget has a strong set of interest groups supporting it, so budget cuts face political roadblocks. President Ronald Reagan came into office on a platform of shrinking government but was unsuccessful, Lemieux notes, and about one-third of the current budget would have to be cut to produce a balanced budget. Lemieux looks at the challenges and concludes, “Forcing Leviathan to act against the incentives of its most influential actors and supporters is a difficult mission” (p. 125).

Chapter 9 looks at the possibility of inflating the debt away. After a detailed description of how a nation’s central bank (the Federal Reserve Bank in the United States) can create inflation by increasing the money supply, Lemieux argues that inflating the debt away is not as straightforward as it first appears. Although inflation would reduce the real value of the outstanding federal debt, it would also increase most federal government expenditures, so it would have a small impact on the deficit. Government spending, from Social Security benefits to federal salaries to food stamps, would tend to go up along with prices. Higher inflation rates also bring with them higher interest rates, so inflation would increase the share of the federal budget that would go toward interest payments. Lemieux concludes that an attempt to reduce the debt through inflation “would be very risky, costly, and difficult” (p. 142).

Chapter 10 looks at the contagion that is likely when countries have debt crises. If a government defaults on its debt, holders of that debt—primarily banks—will face solvency problems, and a banking crisis makes it difficult for all businesses to continue to finance their operations. People have become dependent on their governments and will count on those governments to bail out the economy, but Lemieux notes that when the government itself needs a bailout, this option is not available. He concludes pessimistically, “What is more likely to happen, in Europe and probably in America later, is that contagion will spread, banks will fail, people will lose their jobs, and their life savings” (p. 153).

Because the tax increases or expenditure reductions or both required to reduce the deficit appear politically infeasible, Lemieux says there are only three options: (1) repudiating or defaulting on the debt, (2) defaulting stealthily through inflation, or (3) doing nothing. Chapter 11 examines the implications of each of these options. Default would obviously harm those who hold government debt but also would likely lead to a recession. Banks would fail. Unemployment would skyrocket. Inflation (stealth default) imposes its own costs on the economy because it weakens the value of price signals in an economy, and if it progresses to hyperinflation, it can do major damage to the economy. Doing nothing only pushes the problem into the future because the current debt trend is unsustainable. Meanwhile, China would gain additional influence over us, and some type of default will be inevitable anyway. Lemieux argues that an open default is the least bad alternative.

Lemieux considers whether it is moral for the United States to default on its sovereign debt and observes that the government has promised more than it can deliver to everyone. He says, “The federal government will have no choice but to renege on some promises. The question is: Which ones? What is impossible to avoid cannot be immoral. Is it more immoral to renege on promises to citizens or promises to lenders?” (p. 165). He makes the argument that lenders took a risk of nonpayment when they bought those bonds, so it may be preferable to renege on the promises to bondholders. This argument seems counter to what appears elsewhere in the book. Lemieux earlier argued that without spending cuts and restructuring entitlement programs, the problem will be ongoing. Defaulting on the debt will not reduce the deficit; only a reduction in future expenditures can do that. So, based on arguments elsewhere in the book, it would appear that reneging on entitlement program expenditures is the only long-term solution, and reneging on the debt only delays the day of reckoning.

Chapter 12, the book’s final chapter, is titled “Opportunities” and speculates on what would happen if taxpayers refused to pay the increased taxes to finance the deficit, and debt holders refused to allow the political option of default. These refusals would force government to cut its expenditures, and Lemieux considers options such as phasing out Social Security and shifting Medicare and Medicaid to private insurance. Such options would be viable only because doing nothing for a longenough period would leave no other way out of the debt crisis, and Lemieux says substantial expenditure cuts will be necessary “to maintain liberty and prosperity. They would define a new world, for sure, but the alternative may well be poverty and tyranny” (pp. 179–80). He seems overly optimistic in his conjecture that somehow, despite all the reasons he has already given why it cannot happen, a governmental decision-making process will choose liberty and prosperity over poverty and tyranny.

The book’s first seven chapters present the sobering facts about the public-debt problem clearly and accurately. The final five chapters consider what can be done about the problem. Despite the final chapter’s presentation of the debt crisis as offering opportunities, the facts and analysis that precede this final chapter give little reason for optimism.