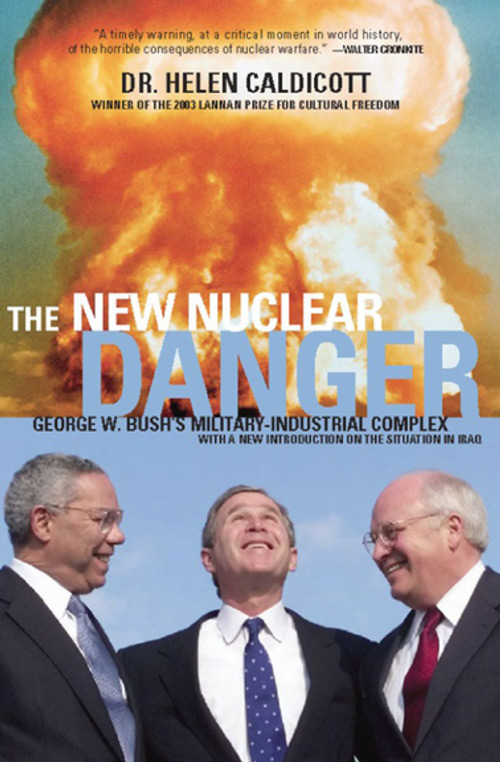 As might be gleaned from the title of her recent book, The New Nuclear Danger, Helen Caldicott critiques from the left the Bush administration’s policies on nuclear weapons and missile defense. Still, she does not spare the Clinton administration or Democratic politicians from blame for sparse accomplishments in arms control, nor does she spare praise for the first Bush administration’s reductions in the U.S. nuclear arsenal. She makes many cogent criticisms about current and prior administrations’ nuclear policies and the excesses of the government-dominated military-industrial complex associated with nuclear weapons, but her often valid points are undermined by other far-fetched or alarmist arguments, sloppy research, and haphazard footnoting.

Caldicott astutely realizes that missile defense is being developed to act as a shield to allow dangerous U.S. military interventions against countries with nuclear, biological, and chemical weapons and with the long-range missiles to deliver them. She also intelligently questions why the United States needs to meddle in the affairs of countries around the globe. (She appropriately criticizes Bill Clinton for intervening militarily overseas more than any other president during the past twenty years in order to compensate for his sex scandal and his lack of military service.) Unfortunately, her critique from the left argues that such iron-fisted diplomacy goes hand-in-hand with “U.S. corporate globalization.” The two, however, do not necessarily go together; she confuses mercantilism at gunpoint with peaceful trade and financial transactions by private parties leading to a more prosperous and interdependent world.

Caldicott also develops some evidence indicating that the Bush administration’s grandiose missile-defense scheme might be aimed at achieving a nuclear first-strike capability against Russia and China, rather than at the stated goal of defending against small rogue nations such as North Korea. She argues that U.S. construction of the most sophisticated tracking and imaging radar in Norway, rather than in Japan, will probably make Russia and China worry that the United States will eventually replace hit-to-kill warheads on missile-defense interceptors with nuclear warheads. (Nuclear warheads for missile defense would be much more effective in mopping up the large number of warheads in a Russian or future Chinese second strike that were not taken out before launch in a U.S. first strike.) In addition, Caldicott implies that space-based missile defense is the gateway to the Bush administration’s weaponization of space, which will include the introduction of antisatellite weapons. She correctly concludes that other countries will follow soon with their own antisatellite weapons and implies that the United States has the most to lose from such an arms race (it has many more satellites than anyone else).

Caldicott appropriately criticizes the military-industrial complex in a post–Cold War world for finding new threats to justify missile defense and U.S. overseas military presence. The North Korean threat is a key justification for both policies. She argues effectively that this threat is being used to justify a continuing U.S. military presence in East Asia that is in truth directed more toward a rising China than toward a starving North Korea.

Caldicott argues effectively that George W. Bush is using his proposal for unilateral reductions in nuclear arms to divert attention from his expansive missile-defense program. Although she does not mention that, appearances aside, Bush’s arms-reduction plan is no more ambitious than Clinton’ s framework, she senses correctly that the Bush nuclear plans do not make the world much safer. She observes astutely that despite the end of the Cold War, U.S. annual funding for nuclear weapons has increased (from $3.8 billion per year to $5–6 billion per year) and the U.S. military’s nuclear targeting list has expanded (from 2,500 targets to 3,000 targets) because targets in China and the “rogue” states have been added to those in Russia. Caldicott undermines the credibility of her arguments, however, by making the alarmist charge that the world is more dangerous now than it was during Reagan’s Cold War presidency. Even with the increased chances of an accidental launch of some nuclear warheads because of the deterioration of the Russian early-warning system and with the greater possibility of a terrorist group’s buying or building a nuclear device (which would be more difficult than she lets on), the end of the Cold War has reduced greatly the possibility of much of the planet being destroyed by an all-out nuclear war between superpowers launching thousands of warheads. As horrendous as an accidental launch or a terrorist strike with a limited number of warheads would be, such scenarios—unlike an Armageddon between the superpowers—would not threaten the survival of civilization.

Caldicott makes a convincing case that both the U.S. government’s nuclear weapons facilities and its use of depleted uranium (DU) ammunition on the battlefield have created environmental nightmares, killing people slowly, but she undermines this argument to a more general audience (outside the American left) by trying to establish a dubious link between global warming and the forest fires in 2000 that threatened dangerous materials at U.S. nuclear labs. She further weakens this link by inserting quotes that she attributes in the text to organizations in the army, but footnotes as coming from an obscure secondary source. Many of her assertions—such as “it is likely that some form of remediable [environmental] action will be required in a DU post-combat environment” and “no international law, treaty, regulation, or custom requires the United States to remediate Persian Gulf War battlefields” (p. 157)—would rest on firmer ground if she cited primary rather than secondary sources. In some cases, she provides no footnotes for important quotes and information. For example, she makes the serious allegation that 70 percent of the iron bombs dropped in the first Gulf War fell on civilian areas, but she offers no source for this information.

Other examples of sloppy research or wild assertions abound, undermining the credibility of the author’s valid arguments. An example of both is her hypothesis (which smacks of black helicopters) that “right-wing think tanks” controlled by corporate interests direct the International Monetary Fund, the World Bank, the World Trade Organization, and other prominent international organizations (pp. 25–26). She argues that the U.S. military-industrial complex exerts influence through such think tanks, which effectively control the government agenda in the United States—in particular U.S. nuclear-security policy. Although an element of truth exits in Caldicott’s analysis, she overstates the influence of such rightist think tanks on government policy and completely disregards left- or moderate-leaning think tanks. Also, her list of right-wing think tanks that, by her implication, promote the nuclear-arms race shows the sloppiness of her research and her pigeonholing of think tanks into “left” or “right” categories as she cites the Cato Institute, which advocates one of the lowest defense budgets proposed and champions deep cuts in nuclear arms.

Another important erroneous claim she makes is that prior to the September 11 attacks, Secretary of Defense Donald Rumsfeld had reduced the Pentagon’s war-planning criterion for determining how many weapons systems are needed from capability to fight two conventional conflicts simultaneously to capability to conduct a single major war. In fact, the Pentagon’s strategy is to have enough weapons to repel an attacker in one theater and to fight the war in a second theater to a decisive end (by taking the opponent’s capital). In essence, Rumsfeld reduced the planning criterion, but not all the way down to fighting just one war.

Caldicott’s far-fetched arguments do the most harm to the cogent parts of her book. She asserts that in a possible nuclear exchange between India and Pakistan, “if any of either Russia or America’s 2,250 strategic weapons on hair-trigger alert were launched either accidentally or purposefully in response, nuclear winter would ensue, meaning the end of most life on earth” (p. xiii). Even if the dubious nuclear-winter thesis is accepted, a mini–nuclear war on the Asian subcontinent plus one Russian or U.S. nuclear warhead is unlikely to bring about such cataclysmic climate change.

In addition, the author appears to go off on what seems like a strange tangent by launching a severe critique of NASA’s exploration of the planet Mars. She cites a man who founded the International Committee Against Mars Sample Return to warn against dangerous microorganisms brought into the earth’s biosphere from samples collected on Mars by the U.S. space program. Yet she also cites a more reputable National Academy of Sciences study noting that the chance of bringing back a dangerous organism from Mars is extremely low. As it turns out, her primary reason for opposing Mars exploration apparently is that the fine dust on Mars will prevent the use of solar panels and necessitate the use of nuclear-powered exploratory space vehicles.

In some parts of the text, Caldicott’s analysis borders on the absurd. Acting as an amateur psychoanalyst, she probes the psychology of the scientists who design nuclear bombs: “Perhaps at a subliminal level these scientists—almost exclusively men—are seeking an archetypal understanding of the experience of conception and delivery, otherwise unavailable to them. The ultimate destruction of the creation is, in their minds, analogous to creation itself” (p. 16).

Fortunately, not all of Caldicott’s prose is so zany. Although the book is flawed in some of its logic, conclusions, and documentation, it is probably worth reading. It gives an good overview—although an excessively anticorporate one—of the military-industrial complex and its effect on U.S. nuclear weapons and missile-defense policies.