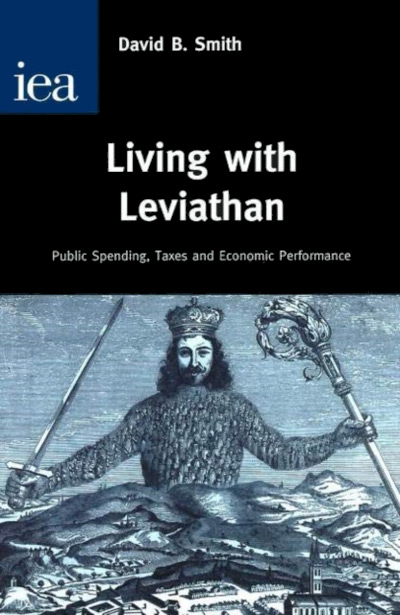 Living with Leviathan
Public Spending, Taxes, and Economic Performance
David B. Smith
Paperback
This book review appeared in the Spring 2008 issue of The Independent Review.

David B. Smith’s Living with Leviathan examines how public spending—and the taxes required to finance it—affects a country’s economic performance, especially the level and growth of gross domestic output (GDP). The author focuses on the United Kingdom and offers several policy prescriptions to reduce the role of government, which, if adopted, would in his estimation increase economic growth. He states that his arguments “come from an unashamedly classical liberal or libertarian direction” (p. 22), which he identifies with F. A. Hayek, Margaret Thatcher, and Tony Blair’s public persona in 1997. As many writers have pointed out, however, most notably Simon Jenkins in Accountable to None: The Tory Nationalization of Britain (London: Hamish Hamilton, 1995), Thatcher privatized and centralized at the same time, so her policies were by no means unambiguously classical liberal in character.

Smith explains that during the twentieth century, public spending, including transfers, both in absolute terms and as a proportion of GDP, grew hugely for all developed economies, especially for the member states of the European Union since 1960. Furthermore, this growth and its inevitable concomitant, great increases in taxes, have been accompanied by a correspondingly large growth in economic regulation.

Unfortunately, Smith’s analysis of British government policy, its ideological foundations, and its economic consequences leaves much to be desired. Moreover, his defense of private property and free markets is stale and weak. His arguments about the proper size of government have not advanced beyond those that the Institute of Economic Affairs (IEA) presented forty years ago. Indeed, in some respects they are less compelling than the arguments the IEA once made. Smith accepts without any serious discussion the idea that the state has a crucial role in the provision of “public goods,” which for him constitute a large share of GDP. The irony is that his advocacy of smaller government rests on undebated assumptions just as much as does the advocacy of bigger government that he criticizes so vigorously, if not very successfully. Thus, the exponents of big government and the exponents of little or no government will find his book equally unconvincing.

Citing econometric research by Antonio Afonso (who has become “Alfonso” in this book) and others, Smith argues that although ample opportunity exists to reduce “waste” in government spending, such reduction requires that government programs themselves be cut. Governments that spend a greater proportion of national income waste more as a percentage of their spending. Therefore, a war on waste will, by itself, be ineffective. Although this claim sounds plausible, Smith does not explain its basis, and skeptical readers who favor large government may remain unconvinced.

In his informed discussion of measurement problems in chapter 2, Smith seems sympathetic to the argument that because the state cannot fund itself, “a more relevant measure of the tax and spending burdens is their ratio to the non-socialized element of national output” (p. 53). This ratio is considerably greater than the more conventional measures in which GDP serves as the denominator. This approach has the additional advantage, to which the author does not refer explicitly, that it avoids the standard procedure of measuring government’s contribution to GDP as equal to the amount paid for inputs (for example, the salaries of civil servants) in the absence of markets for the final output. For those who are skeptical of government spending, payments for inputs overestimate the value of government output. For those who are enthusiasts for government provision, they underestimate the value of government. And for someone like Smith, who favors government provision of public goods and opposes other sorts of government spending, they underestimate the value of some types of spending and overestimate the value of other types of spending. His argument that public-sector productivity has not kept pace with private-sector productivity is useful, but it should be distinguished from the foregoing argument.

Smith argues further that the high levels of government spending may explain the slower economic growth in the European Union in recent years. However, as he himself admits, his appeal to high-powered econometric evidence (see chapter 3) takes us only so far. He devotes a chapter to an insightful consideration of economic theory, focusing on the high marginal tax rates in Britain, with some reference to empirical studies, and successfully rebutting the ideology of high taxing and spending.

The irony is that in Taxmanship: Principles and Proposals for the Reform of Taxation, a monograph the IEA published in 1964, Colin Clark argued that taxes levied above 25 percent of net national product at factor cost were a source of price inﬂation, whereas Smith, writing in 2006 and citing the work of Vito Tanzi and Ludger Schuknecht, suggests that the optimum tax and spending burdens are 30–35 percent of GDP (p. 157). In fairness to Smith, we may note that he does state—but without any explanation—that “even the long list of public goods and services can probably be provided using less than one fifth of national output” (p. 34).

In chapter 6, “What Is the Optimal Size of the Public Sector?” Smith writes: “There seems to be general acceptance that there are high marginal returns to increased public spending when it is starting from a low base, with the provision of the rule of law, public health measures and elementary education all boosting growth, as well as being desirable in themselves, even if there may be scope for private or mixed public/private provision in certain areas” (pp. 139–40). This statement raises several questions. First, when has “general acceptance” ever been a good argument for anything? Second, is Smith aware of the work by E. G. West, whose seminal book Education and the State (London: IEA, 1965) showed that school attendance and literacy rates were greater than 90 percent before the state became involved in education in England and Wales in 1870? Smith proceeds to argue that the revenue-maximizing point on the Laffer curve is likely to be at a higher tax burden than what he calls the “utility-maximizing point” on an analogous graph that relates economic welfare to public spending. Although this claim is plausible, Smith does little to ground it, and an advocate of bigger government would find his analysis unconvincing despite the graphs in figure 13 on p. 143.

Smith then asks, “If government is so bad, why do we have so much of it?” (p. 145). He answers by noting that “the democratic system itself can be used to redistribute income from one group of voters to another. Once that process has taken place a large proportion of the electorate can pay nothing towards the costsofthe state, but can vote for others to hand over money for their benefit, while a minority of the electorate pays a quite disproportionate share of the costs of the state” (p. 146). In a footnote, he refers readers to the literature on public-choice economics.

It may be inaccurate, however, to portray the U.K. economy as one in which “a large proportion of the electorate [pays] nothing towards the costs of the state, but [votes] for others to hand over money for their benefit, while a minority of the electorate pays a quite disproportionate share of the costs of the state,” at least in the way Smith has in mind. A large part of government expenditures goes not to finance cash transfers, but to finance hospitals, schools, and the like. The most obvious beneficiaries are the doctors, nurses, hospital porters, teachers, and administrators who work for the state rather than the families who receive “free” medical treatment and whose children attend “free” state schools.

Much of public-choice economics seeks to explain how the beneficiaries of government largesse are relatively few (“concentrated benefits”) and the taxpayers relatively numerous (“dispersed costs”). (Smith does make a roundabout reference to this idea on page 37 and another confused reference on page 173.) This situation is indeed the case when government employees (a minority, albeit a large one) are supported by taxation levied on the private sector (where a majority works). This situation is also the case when some firms and workers in the private sector receive government subsidies and privileges paid for by other firms and workers in the private sector in the form of higher taxes and prices. Smith includes the 11.8 million pensioners as beneficiaries of the state, but he fails to point out that many (most?) pay more in taxation and higher prices than they receive in state pensions. These sorts of considerations point to severe limitations in the model he uses to explain the British political economy.

Smith does make the important argument that the British political economy is characterized by a major “regional injustice” because the state uses its power to transfer vast sums from England, especially London and the Southeast, to northern England, Wales, Scotland, and Northern Ireland. Of course, all economic activities, voluntary and coerced, have different implications for different regions. One may wonder, however, whether the undoubted redistribution that occurs through the tax system is either created or sustained in order to favor particular regions in the hope that the governing party will receive political support in future elections. For example, regions with disproportionate numbers of high earners, such as the outer suburbs of London, pay more income tax, and areas of high unemployment receive more unemployment benefits. This difference will continue as long as tax-financed unemployment benefits are paid, regardless of whether anyone intends to redistribute money from the former region to the latter. Some expenditures, of course, definitely seem to be undertaken to benefit people in particular parliamentary constituencies.

Although Smith’s complaint about “regional injustice” suggests the desirability of achieving “regional justice,” is that objective not simply a version of “social justice,” which F. A. Hayek has shown to be incoherent? Libertarians and classical liberals have made good arguments against state redistribution of income through the tax system, but the avoidance of regional redistribution is not one of these arguments. What some commentators who object to “regional injustice” may have in mind is an argument about “keeping the money in the region.” If so, it is nothing more than a rehash of the discredited mercantilist doctrine that Adam Smith demolished in 1776. David Smith, however, seems to have some other argument in mind.

In the final chapter, “Policy Conclusions,” Smith discusses both constitutional reform and specific policy changes. He suggests requiring some sort of property qualification to vote (but he does not consider restricting the franchise to net tax-payers, which would exclude almost all government employees) and fiscal decentralization. He commends ﬂat taxes (to reduce the disincentive effects of high marginal tax rates) without a substantial zero-rate threshold (to “strengthen the perceived link between spending and taxation, limit the free-rider problem, and encourage politicians and electors to behave more responsibly” [p. 170]). He declares that a strong political case can be made for reducing the contributory principle to social insurance, and, like many other IEA authors, he urges that we consider vouchers for health and education without any consideration of their impact on current private provision.

All in all, Living with Leviathan is like the curate’s egg—good and bad in different parts, with the good parts not enough for us to overlook the less-informed and less-persuasive parts.