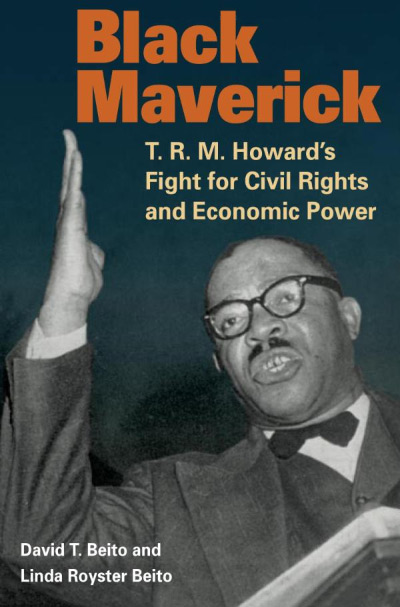 One of the great gifts of biography is to provide examples that confound the stereotypes that inevitably creep into our historical memory as we inevitably reduce the past to a few manageable images. David T. Beito, professor of history at the University of Alabama, and Linda Royster Beito, professor of social sciences at Stillman College, have confounded such a stereotype in their lucid and economical recounting of the life of Theodore Roosevelt Mason Howard (1908–76), a black civil rights leader who bore few similarities, at least upon superficial examination, with the pious African American ministers who leap to mind when we think of the personalities who led blacks in the overthrow of segregation in the 1950s and 1960s. In addition to being the leading black activist against segregation in its most dangerous haven, Mississippi, in the early 1950s, Howard was also a wealthy entrepreneur who provided both medical care and banking and recreational services to needy black Mississippians; a physician who created successful hospitals for indigent blacks and performed many abortions long before Roe v. Wade; a bon vivant who hunted big game in Africa, roared around in the latest-model Cadillac, and fathered virtually a yard full of illegitimate children yet stayed married to one woman for forty years; and an independent thinker who always carried a gun and incurred the wrath of both J. Edgar Hoover and Thurgood Marshall. No writer of fiction would dare create a character so varied or contradictory.

Born in the Black Patch tobacco region of western Kentucky to a line of poor black farmers, Howard gained attention early for his intelligence, acquired a generous white sponsor for his development, and demonstrated an oratorical skill that would win him attention throughout his life. After college in Alabama and Nebraska, he attended a Seventh-Day Adventist medical school in California. Along with his medical degree, he acquired a taste for politics and a flair for writing. He became a newspaper columnist and then a political activist, supporting the California gubernatorial campaigns of the Prohibitionist evangelist Robert Shuler and the socialist writer Upton Sinclair. Neither won, but Howard thus demonstrated that he was a fellow who followed his own lights in politics, sometimes in disregard of expectations, as he would later in his civil rights activism and his professional endeavors.

In 1942, he returned to the South and became the chief surgeon at an all-black hospital in Mound Bayou, Mississippi, a town noted at the turn of the twentieth century for its demonstration of black autonomy and enterprise. The hospital was founded and supported by a black fraternal order, the Taborians, to provide health care for poor Mississippians. The authors point to the significance of such private self-help organizations in black uplift efforts as a traditional but often overlooked phenomenon in the black experience. In other words, the authors suggest, blacks were taking care of their own needs long before the Great Society intervened.

While practicing medicine, Howard bought a big farm, raised livestock and cotton, and enjoyed bird dogs and quail hunting. He was, but for his complexion, the quintessential delta planter. He also founded a credit union, an insurance company, a construction firm, and a restaurant. For the black children of the delta, he built a swimming pool and a small zoo. But perhaps what gave him most historical significance was his founding in 1951 of the Regional Council of Negro Leadership, a grassroots civil rights organization that organized voting-rights campaigns, economic boycotts, and large rallies featuring black celebrities to bolster the morale and activism of African Americans in the most segregated place in America, Mississippi. An employee of his insurance company, Medgar Evers, acquired organizational skills and a commitment to race-relations reform under Howard’s tutelage.

Howard gained a much higher national profile with the Emmet Till lynching in Money, Mississippi, in 1955. A fifteen-year-old Chicago boy visiting his grandfather for the summer, Till allegedly made an untoward comment to a white woman in a country store and as a result was killed, his body thrown in a river. His murderers were well known and made to stand trial. As one of Mississippi’s leading civil rights activist at the time, Howard swung into action, bringing Till’s mother to his home, entertaining journalists, and protecting witnesses who might help to convict the two white men charged. Howard was hardly surprised by the “not guilty” verdict, and he began a campaign to make sure that Americans everywhere learned of the injustice in Mississippi. He spoke all over the country, denouncing Mississippi’s criminal justice system and the Federal Bureau of Investigation (FBI) for its failure to help convict murderers when the victim was black. Howard made a permanent and dangerous enemy in J. Edgar Hoover, who replied with a public letter condemning Howard’s intemperate and baseless charges. The liberal white delta newspaper editor Hodding Carter, a grudging admirer of Howard, said in the aftermath of Howard’s Till campaign that he would not gamble on Howard’s life expectancy in the delta, and, indeed, a rabidly segregationist Jackson newspaper encouraged some white Mississippians to put Howard in his place—presumably the graveyard.

In 1956, Howard did indeed abandon Mississippi, an act somewhat difficult to explain, given his long demonstration of courage, although that year the White Citizens Council completed their complete closure of Mississippi’s white society, and the state’s Ku Klux Klan unleashed terror that ended the lives of several black activists during the next few years. His departure may have been a response to his wife’s fears or simply a restless soul’s quest for a new and larger challenge. He moved to Chicago that year and established a successful medical practice that eventually culminated in the Friendship Medical Center on the city’s South Side. He became known as an abortionist before abortions were legal. As the national civil rights movement emphasized nonviolence under the influence of Martin Luther King Jr., Howard remained an outspoken advocate of gun rights and self-protection—an iconoclastic position, although one hardly unknown among blacks during King’s heyday. Howard openly expressed his hatred of communism. Despite going his own way, he became an influential mentor to one whose fame would far surpass his, the young Chicago preacher-activist Jesse Jackson.

Blessed with a flamboyant and iconoclastic character as their subject, the Beitos have done a highly professional job in combining interviews with FBI files, court documents, and private papers to draw a riveting and realistic portrait. They make a persuasive case that entrepreneurship and mutual aid played important roles in African Americans’ economic and political progress in the years before the successes of the civil rights movement. Although Howard’s personal style differed greatly from Booker T.Washington’s, his emphasis on entrepreneurship, community building, and black autonomy were clearly in the famous Tuskegeean’s strategic tradition. The Beitos emphasize the black middle-class origins of civil rights activism; Howard was not a minister or union activist and certainly not on the political left, which has been the profile of civil rights leaders on which historians have dwelt most often in recent years. Most early activism, of which there was much before we knew the name of Martin Luther King Jr. or Rosa Parks, was the work of middle-class blacks who had a measure of independence from white authority. T. R. M. Howard clearly epitomized that reality, as the Beitos’ compelling work will hereafter remind us.