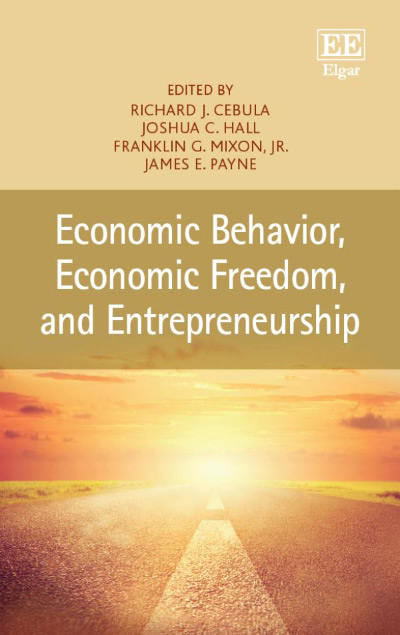 The Economic Freedom of the World Project began over 25 years ago in an attempt to objectively measure economic freedom and explore the connection between it and other variables. The initial summit involved sixty of the world’s top scholars including three Nobel laureates and has since grown into a major resource for understanding how capitalism and sound market institutions affect prosperity (James Gwartney, Robert A. Lawson, and Joshua Hall, "Economic Freedom of the World: 2014 Annual Report," Fraser Institute). Economic Behavior, Economic Freedom, and Entrepreneurship is an exposition on the merits of economic freedom with a particular emphasis on two topics: economic behavior and entrepreneurship. Cebula, Hall, Mixon, and Payne do an excellent job of compiling many interesting topics in its twenty-one chapters and recruiting a broad array of experts to contribute to this volume. There is a logical flow and design in the volume’s structure, which is much appreciated. Broadly speaking, it begins with a discussion of institutions and economic freedom. It describes the concept and measurement of institutions to the reader, with a particular emphasis on economic institutions, i.e. economic freedom. It then explains how these institutions often facilitate productive and efficient behavior, which serves as a basis for the entire book. The middle of the book expands this discussion to examine economic freedom and human behavior with many applications in public policy. The book concludes with an exploration of the relationship between entrepreneurship and economic freedom.

Readers will find this a useful guide if they are interested in anything even remotely related to institutional theory, economic freedom, or entrepreneurship. The book is written by academic scholars for other scholars. However, policy analysts will also find the content on economic freedom and economic behavior very interesting, especially chapters 9 through 15.