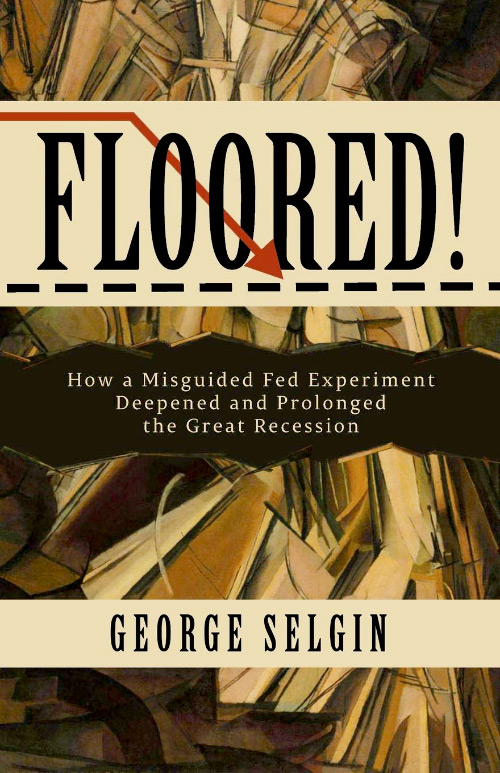 Floored
How a Misguided Fed Experiment Deepened and Prolonged the Great Recession
George Selgin
Kindle Paperback
This book review appeared in the Winter 2019/20 issue of The Independent Review.

When Federal Reserve officials first announced in 2008 their plan to engage in quantitative easing, many believed that inflation would soon follow. The Fed’s rapidly expanding balance sheet, the argument went, would cause the money supply to balloon and the price level to skyrocket. Yet in the years since the plan was instituted, inflation has remained relatively mild. Why did the predictions of these dire warnings never come to pass? In Floored! How a Misguided Fed Experiment Deepened and Prolonged the Great Recession, George Selgin argues that these outcomes failed to materialize because Fed officials adopted a new operating framework in the midst of the financial crisis that fundamentally transformed the U.S. monetary system.

Selgin’s book is a comprehensive analysis of the Fed’s new operating framework— known as a floor system—that provides an overview of its origins and an examination of its macroeconomic consequences. Selgin argues that the floor system not only is illegal but also has had several deleterious effects on the U.S. economy and raises serious political economy problems that threaten to further politicize the Fed. Selgin’s goal is to convince policy makers and the general public that rather thanmaking the floor system permanent, as some have suggested, the Fed should return to a more conventional operating framework.

As Selgin explains in the book’s early chapters, a floor system is an operating framework wherein the central bank’s primary instrument of monetary policy is the interest rate that it pays on bank reserves. In a floor system, there is no longer a link between the quantity of reserves in the banking system and the overall stance of monetary policy, which means that increases in the size of the central bank’s balance sheet need not lead to increases in the money supply and the price level. By contrast, prior to the financial crisis, the Fed’s primary policy instrument was the federal funds rate, which it influenced by varying the quantity of reserves in the banking system via open market operations.

In 2006, Congress authorized the Fed to pay interest on reserves in order to offset the implicit tax that minimum-reserve requirements impose on banks and their depositors. According to Selgin, the original intent behind the law was not to alter fundamentally the way in which the Fed conducts monetary policy. Rather, as Selgin shows, Fed officials argued that they would use this newfound authority to reinforce their traditional means of monetary control by using the interest rate paid on reserves to establish a lower bound on the federal funds rate such that the latter would remain the central bank’s primary policy instrument.

Other than authorizing the Fed to pay interest on reserves three years earlier than initially authorized by Congress, however, the law passed in 2008 left the original law intact, which required the rate paid on reserves to be set at or below the general level of short-term interest rates. Selgin notes that this requirement was at odds with the Fed’s efforts to sterilize its emergency lending. To prevent its emergency lending from influencing the stance of monetary policy, the Fed would have to break the law by paying a rate that exceeded that paid on other comparable assets to ensure that banks would not lend their excess reserves. As Selgin shows, the Fed did exactly that.

Selgin makes five claims about the macroeconomic consequences of the Fed’s new floor system. First, it contributed to the recession and slow recovery by keeping monetary policy excessively tight. Selgin argues that Fed officials failed to recognize that the source of the financial crisis was a shortage of liquidity and in consequence contributed to the collapse in nominal spending by essentially paying an above-market rate on reserves that incentivized banks not to lend. Moreover, Selgin argues, there is a builtin overtightening bias in a floor system because it is extremely sensitive to the interest rate paid on reserves; if the rate is set too low relative to other rates, central-bank officials may inadvertently revive the traditional monetary transmission mechanism, causing prices to skyrocket.

Second, the floor system caused a collapse in the federal funds market as the rate paid on reserves exceeded that which banks could earn by loaning to one another. According to Selgin, this change has had two negative effects: it drastically reduced an important source of bank liquidity, which has caused banks to hold larger precautionary quantities of reserves, and the collapse of the federal funds market reduced the incentive for banks to monitor other banks because they are no longer lending to one another, subjecting the financial system to increased systemic risk.

Third, the floor system has undermined the effectiveness of the Fed’s open market operations such that larger asset purchases are now required to achieve the same level of monetary stimulus. As Selgin explains, the reason for this change is straightforward: banks are opting to hold a substantial quantity of excess reserves rather than exchange them for other types of assets because the former offers a better return under the Fed’s new operating framework. As a result, the ratio of bank reserves to total bank deposits has increased from basically zero before the financial crisis to 20 percent, leading to a substantial decline in retail lending.

Fourth, the fall in retail lending has increased the Fed’s role in the allocation of scarce credit, which, Selgin argues, has contributed to the postcrisis slowdown in productivity. In his view, the Fed has become an extremely large financial intermediary that borrows from commercial banks at interest and then channels the funds so acquired to those institutions whose assets the Fed is purchasing. As Selgin explains, however, Fed officials lack both the knowledge and the incentives necessary to employ the economy’s savings more effectively than their private-sector counterparts. Thus, there is little reason to believe that the investments the Fed is making are superior to those that would otherwise be made by commercial banks. As a consequence, the Fed’s increased role in financial intermediation has reduced the efficiency of the banking system.

Fifth and finally, Selgin claims that the floor system has severed the link between the size of the Fed’s balance sheet and the stance of monetary policy. Under the new regime, the balance sheet has become a “free parameter,” which may lead to Congress using the Fed to fund off-budget programs. In Selgin’s view, this effect is particularly troubling because increases in the Fed’s balance sheet no longer lead to increases in the price level, and thus there will be little pushback on politicians from the public to limit the Fed’s size, which may ultimately undermine the Fed’s independence.

Selgin concludes the book by outlining a process of policy normalization whereby the Fed could eventually return to a version of its precrisis operating system. Recognizing that Fed officials may be unwilling to do so, Selgin also calls on Congress to nudge the Fed in this direction by holding the bank accountable to the spirit of the 2006 law. If Fed officials want to make the floor system permanent, Selgin argues that such a change should be explicitly authorized by Congress rather than be founded on the Fed’s dubious legal interpretation.

It remains an open question as to whether there is the political willpower to reform the Fed’s operating framework in the manner that Selgin suggests. If the floor system enables Congress to fund off-budget programs, then reforming the Fed’s policy framework may be quite difficult. Selgin does not delve deeply into the political economy of the current system. Identifying the interest groups—including politicians and Fed officials—that benefit from the floor system will, in my opinion, be crucial to successful reform. This point is not so much a criticismof Selgin’s book as it is an area for future research.

One of the book’s many strengths is Selgin’s summary of the basic monetary concepts in the book’s early chapters. His discussion brings clarity to what can sometimes be a dry and impenetrable topic to those unfamiliar with monetary theory and policy. In consequence, the book should be accessible to both the general public and economists whose expertise lies in other areas. More importantly, however, Selgin has made an important contribution to our understanding of the causes and consequences of the Great Recession that vividly illustrates the important influence monetary institutions can have on economic performance.