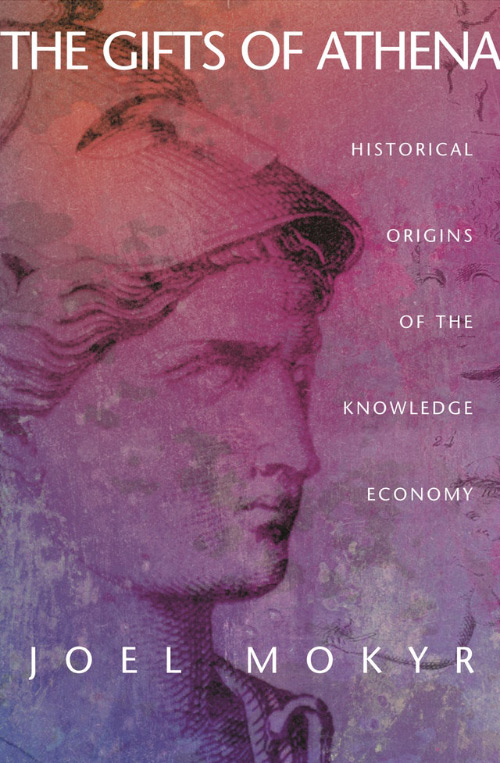 The Gifts of Athena
Historical Origins of the Knowledge Economy
Joel Mokyr
Kindle Hardcover Paperback
This book review appeared in the Winter 2004/05 issue of The Independent Review.

The first great book in economics focused on what economists today call “the economics of development” or “growth theory.” In An Inquiry into the Nature and Causes of the Wealth of Nations, Adam Smith delivered—brilliantly—just what the title of his book promised. In the centuries since that book’s publication, however, economists have failed to make significant further progress in understanding economic growth. This failure is both evident and embarrassing.

One reason for the sorry lack of progress in understanding economic growth is that this topic has been dominated by theorists: blackboard buccaneers confident that, armed with impeccable logic, they need not pay serious attention to messy, complex, frustrating reality. It is no surprise, therefore, that most of the best work on economic growth comes from economic historians.

Joel Mokyr, a professor of economics at Northwestern University, is among today’s leading economic historians. His knowledge of historical details is imposing, as is his knack for extracting insights from those facts. In The Gifts of Athena, Mokyr aims chiefly to explain why the Industrial Revolution occurred when it did (circa 1750–1830) and where it did (Great Britain) and why it eventually spread throughout the Western world. He rightly recognizes that this event is “the central event of modern history. Nothing else even comes close” (p. 285). Mokyr argues that modern economic growth is the product of an unprecedented expansion and application of “useful knowledge.” The claim, as stated, is trite, but in the process of unpacking it, Mokyr’s book shines.

The practical, applied tinkerer who stumbled across a workable machine that raised worker productivity certainly contributed to economic growth. As Mokyr takes pains to explain, however, the staggering vastness of the economic-growth process during the past two centuries cannot have resulted from a flurry of trial-and-error experiments by determined tinkerers. Instead, the quest for propositional knowledge became institutionalized in universities, research institutes, and professional societies. One consequence is that people spent less time and effort tinkering in ways that were destined to fail. Equipped with more and better propositional knowledge, people more successfully discovered where and how to apply their efforts at creating new products and production processes.

Although economies are more likely to grow if inventors and innovators have ready access to sound propositional knowledge, such knowledge is hardly sufficient. (If it were, North Korea would be just as wealthy as North America.) Also required are a distribution of propositional knowledge (and of knowledge-producing processes) that encourages its further development and use, institutions that foster the systematic development of prescriptive knowledge (from propositional knowledge), and societal openness and rationality. Societies deeply committed to belief in magic or highly suspicious of change or intolerant of intercession or intellectual achievement by those on the lower rungs of the social ladder will not progress even if their elites are brilliant in devising and testing abstract theoretical propositions. As summarized by Mokyr, “The driving force behind progress was not just that more was known, but also that institutions and culture collaborated to create better and cheaper access to the knowledge base” (p. 103). Knowledge that is bottled up by stifling conventions or by politics will never be used to its potential.

Mokyr argues that Great Britain was the birthplace of the Industrial Revolution because the British were unusually open to change. Their political culture discouraged government from hamstringing the changes that technological progress and entrepreneurship induced. Despite Newton and other brilliant scientists, Great Britain did not boast a disproportionate supply of theoretical geniuses; France certainly stood toe-to-toe with Albion in this arena. For a cluster of reasons that Mokyr reviews, however, France and other countries were too closed to the practical application of knowledge to best Great Britain economically at the dawn of the industrial age.

As we move from a bird’s-eye view to one closer to the ground, the most interesting chapter is “Knowledge, Health, and the Household.” Economic growth is too often discussed as something that happens exclusively in the commercial or industrial sector, with households being mere passive beneficiaries of the creative genius, entrepreneurial spirit, and sound institutional arrangements that exist outside of households. Mokyr models households as active decision makers—agents that “choose many recipes, from toothbrushing to jogging to the consumption of broccoli” (p. 166). “In the past two centuries household behavior has been affected by formal and informal [propositional] knowledge far more than has been realized by social historians” (p. 180).

Mokyr uses the example of household cleanliness. The statistical revolution, dating back to the Enlightenment, gave birth in the nineteenth century to epidemiology, and close on its heels came a “war against filth” in households. Exposed to at least the broad outlines of the “germ theory,” households chose to intensify their battle against microscopic enemies. According to Mokyr, this household choice is the chief cause of the fantastic fall in mortality during the last half of the nineteenth century in Europe and North America.

Of course, housewives did not leap into battle alone and unarmed:

A combination of the paternalism of the educated classes and the greed of commercial salesmen created an apparatus that diffused the new knowledge rapidly among the working classes in the industrialized West. Although the absorption of the full behavioral implications of the germ theory took decades to complete, what is surprising is how relatively quick and complete its triumph was by 1914; the changed behavior led to sharp declines in infectious disease decades before the introduction of antibiotics. The new knowledge provided the proverbial ounces of prevention that explain the almost miraculous decline in mortality. (p. 188)

Reading this chapter made me want to rush to my kitchen and hug a bottle of Lysol.

The book’s metalesson is one brought home also by William Easterly in The Elusive Quest for Growth (Cambridge, Mass.: MIT Press, 2001)—namely, that there is no recipe for economic growth. We have a fairly good catalog of conditions that will prevent growth, but we know very little about the minimum conditions necessary for sustained growth to occur. To modify a popular saying, the god is in the details, and the relevant details are richer, more nuanced and variable, and above all much greater in number than most “development” theorists recognize. Economic history teaches these lessons. Thus, a single economic historian of Joel Mokyr’s high caliber sheds much more light on economic development than does any random collection of several dozen development theorists.