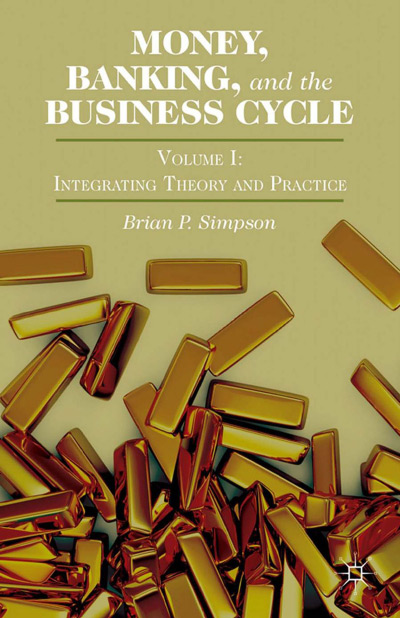 Brian P. Simpson connects a wide range of macroeconomic topics that circle around business-cycle theories. His two volumes follow a natural sequence of analysis for someone who sees monetary policy as the reason for business cycles. After offering a theoretical discussion of money, banking, and inflation, Simpson describes the Austrian Business Cycle Theory (ABCT) (vol. 1, part 1), which is his main tool of analysis for the rest of the project. Next he applies ABCT to a range of historical cases, including the recession of the 1980s and the Great Depression (vol. 1, part 2). After demonstrating the case for ABCT in volume 1, Simpson offers in volume 2 refutations of alternative business-cycle theories (part 1) and boldly proposes a monetary reform that he believes will put an end to business cycles (part 2).

The title of chapter 4 in volume 1, “In Defense of Austrian Business Cycle Theory,” truthfully captures the book’s project. Directly or indirectly, each chapter has a role in defending ABCT. Simpson is not shy about the role he assigns to ABCT; in a passage whose message is repeated more than once, he states that “only one theory provides a comprehensive explanation of the cycle. The theory I discuss here is the only one that makes sense logically and explains all the factors of the cycle. The only valid theory of the business cycle is Austrian business cycle theory (ABCT), as put forward by authors such as Ludwig von Mises, George Reisman, Friedrich Hayek, and Murray Rothbard, among others” (p. 1:59, emphasis added).

The audacity of this statement encapsulates the most important shortcoming of this notable project. To support such a statement, not only does ABCT need to explain all business cycles, but all other business-cycle theories also have to be inconsistent with the ABCT. This means that ABCT’s boundaries are pushed to a point where the theory becomes disfigured, and the boundaries of alternative theories are constrained to a point where the reader wonders if what is being presented is a reasonable version of other theories and points of view, such as Keynesianism. Let me first use two historical cases as examples of how Simpson applies ABCT. Then I will comment on criticisms of other theories or points of view.

Austrian Business Cycle Theory is not a theory just of credit expansion; it is a theory of particular effects produced by credit expansion. Those particular effects are the increase in investment in more capital-intense or long-term projects with respect to less capital-intense or short-term projects. To use John Law’s financial bubble as a historical case in defense of ABCT is then a weak case. The distinctive aspects of ABCT are not required to argue that monetary expansion can produce a financial bubble. A monetarist theory, for instance, might offer a similar explanation. The reader of Simpson’s book may fall under the impression that ABCT is the only valid theory of business cycles because it now has absorbed other theories into itself. But then the same might be done with other business-cycle theories, such as making the monetarist theory absorb the ABCT.

In the chapter on the Great Depression, the fall in money supply is dismissed as a relevant factor of this particular historical episode (pp. 1:199–200). However, the ABCT explanation is arguably not enough (necessary but not sufficient) to explain the extent of the fall of the economy and the length of the depression. Although New Deal interventions (and other explanations such as Robert Higgs’s regime uncertainty) can be used to explain the length of the depression, the monetarist explanation that rests on the contraction of money supply is needed to clarify why the economy fell so much. Let us assume that M2 all of a sudden shrinks by one-third in a period of four years. Would Simpson sustain that this monetary contraction is unimportant because of fractional reserves, as he does for the case of the Great Depression? Would not such a monetary contraction have an effect on the severity of the crisis regardless of any ABCT merits to explain what was wrong during the 1920s? Just as ABCT should not be dismissed because it is unable to explain the whole Great Depression episode, as Simpson recognizes, it is equally unwarranted to dismiss the monetarist explanation because it contributes to explaining only a particular characteristic of the Great Depression. A business-cycle theory does not need to explain all business cycles to be valid or useful.

Simpson criticizes major alternative business-cycle theories such as underconsumption and overproduction, Keynesian business-cycle theory, and real business-cycle theory. It is not clear, however, that he is criticizing the best version of these theories, so he might have made of them a too easy target. This oversight is not because of a major misconception but because of a large set of small ones. I expect most readers of Simpson’s book to more or less agree with his criticisms (as I do in general terms), so I only want to show a couple of examples and then move on to his assessment of free-banking episodes, which I expect to be of greater interest to his readers.

In the chapter about the Keynesian business-cycle theory, Simpson asserts that Keynesians “just assumed that wages and prices are inflexible in a free market” (p. 2:46). Right or wrong, Keynesians had reasons to believe in sticky prices. Keynesian theory is not a theory in the context of free markets (as understood by Simpson), but a theory in the context of markets as they were regulated circa the 1930s. To argue that prices in free markets are not sticky, as Simpson does, is not the same as saying that prices were flexible around 1930. If prices were sticky due to regulation, as Simpson argues, then the “assumption” in the Keynesian theory holds. These and other misrepresentations affect too much the theory under scrutiny. Another example is the Real Business Cycle (RBC) theory, which is presented as a theory that relies on changes in productivity rather than on changes in the growth rate of productivity (with respect to the expected productivity growth), as a best version of this theory does. It is therefore not a valid criticism of this theory to argue that it is hard to explain a loss of technological knowledge.

In discussing the validity of different free-banking episodes (vol. 2, chap. 6), Simpson discards some well-known episodes, such as those of Scotland, Canada, Chile, and Australia. The rejection does not come as a surprise, however, because for Simpson fractional-reserve banking is a serious problem for the economy. However, the reason these episodes are discarded is that he does not consider these episodes as pure free-banking historical cases. To the best of my knowledge, however, no advocate of free banking has sustained that any of these episodes represents a historical case of pure or perfect free banking. The real world is not divided into white-and-black clear-cut cases but presents itself instead as a grayscale set of cases. Some are more close to white (i.e., pure free banking), and others are more close to black (i.e., complete government centralization of money and banking). It is precisely in the separation between episodes that are more or less close to genuine free banking that historical cases can inform us of how the system might work even if it is not a pure free-banking case. Under the same argument, historical cases of government mismanagement of money supply can be dismissed as cases against government control because they are not cases of pure money and banking centralization.

The important issue is whether the institutions in place represent similar incentives to the model being studied, such as free banking. A sports analogy might be useful. Assume that pure free banking is represented by the basketball rules used in the NBA (“pure basketball”), but we have no observation of how NBA games are played. Other basketball leagues, such as college leagues or leagues in other countries, have some different rules. The latter are not pure basketball cases. But we would not go as far as to say that by looking at how the games are played in these leagues we cannot learn what an NBA game would look like. The game under observation is very similar because the incentives are virtually the same. It is not as if we are trying to make inferences about basketball by watching a completely different game, such as baseball. What the free-banking literature does is look at basketball games (not baseball games) around the world to infer how an NBA game would look. Simpson’s objection to these historical cases thus misses the point.