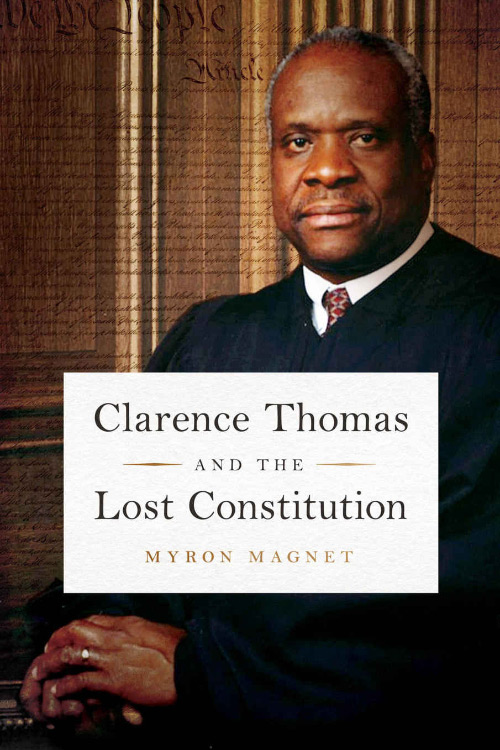 Clarence Thomas and the Lost Constitution
Myron Magnet
Kindle Hardcover Audiobook
This book review is a web exclusive for the Winter 2019/20 issue of The Independent Review.

American liberals, especially those inhabiting the halls of elite law schools, abhor Clarence Thomas. From his Senate confirmation hearing to the present, Thomas has been the target of scurrilous attacks on his character, legal acumen, and originalist methodology. In his new book, Clarence Thomas and the Lost Constitution, Myron Magnet seeks to explain why the Left detests Thomas in conjunction with a survey of Thomas’s work on the high court.

On the former point, Magnet recounts how the liberals depend on judges to hand them policy victories that could not otherwise be won by honest argument and persuasion of fellow citizens. Loss of judicial power means the stymieing if the leftist political agenda. “In stark contrast,” Magnet notes, “any conservative jurist, by definition, will believe that it is illegitimate for unelected justices with lifetime tenure to legislate from the bench in this Wilsonian manner” (p. 6).

The issue of raw power aside, the Left also resents Thomas for being a black man who does not appreciate how his race is allegedly indebted to, and thus should support, an activist government. Magnet contrasts Thomas’s worldview with that of Barack Obama for whom a “sense of victimhood” formed “his self-conception” and “left no room for the idea of individual agency or even individual free will” (p. 131). For Obama, black advancement depends not on individual initiative but the engine of a benevolent government.

In contrast, Thomas learned from his grandfather to reject victimization and to believe that a better life was possible through hard work, study, and self-discipline. Embracing conservative values, Thomas’s grandfather in the midst of Jim-Crow Savannah built a successful business and provided for his family. As a college student Thomas did toy with embracing the victim mindset, but turned to God to purge his heart of resentment and rage that threatened to undo him. With the help of the Almighty, Thomas set out the think for himself and to make himself a better man.

Magnet puts great stress on Thomas’s belief that the promises of the Declaration of Independence (e.g., all men are created equal and endowed with rights) belonged to all Americans. Indeed, Thomas learned this at an early age from the nuns in Catholic school. Magnet also makes much that in later years Thomas was introduced to the writings of Leo Strauss and Harry Jaffa. Indeed, the book leaves the reader with the impression that Thomas is a full-blown Straussian poised to mold and shape the constitutional text with natural law rather than the plain meaning of the words themselves or the intent of the Framers and/or ratifiers. The evidence does not support this contention. As Justice Antonin Scalia might have said, this is “pure applesauce.”

Of course, as a Roman Catholic legal scholar Thomas does believe in natural law. But Magnet would be hard pressed to cite one case in which Thomas has used natural law as the Straussians demand. Magnet makes no mention of Thomas’s dissenting opinion in U.S. Term Limits v. Thornton (514 U.S. 779 [1996]), in which Thomas expounded the nature of the Union and rejected the contention that the Union preceded the states, a key component of Straussian legal theory. In arguing that the states have the right to impose term limits on congressmen, Thomas described in detail how and why the Constitution had to be ratified by separate state conventions inasmuch as sovereignty, that is, ultimate power, rested with the people of the several states. Thomas was quick to point out that there was no such thing as the American people composing one great body. “The Constitution simply does not recognize,” Thomas averred, “any mechanism for action by the undifferentiated people of the Nation” (Id. at 846).

This clumsy attempt to paint a Straussian picture of Thomas also leads Magnet to place the blame for the modern constitutional revolution on the shoulders of Woodrow Wilson. Magnet is correct that Wilson believed in a living Constitution and preferred the work of expert bureaucrats to the Framers’ design. However, because of his devotion to Straussian ideology, Magnet is unable or unwilling to cast any of the blame on Abraham Lincoln and despotic and centralized power exercised during the War between the States. Lincoln claimed broad war powers alien to the written Constitution, promoted business monopolies with tariff increases, adopted the first income tax in U.S. history, and began partnerships with private industry that today we would call corporate welfare. Of course, this list does not even include the civil liberties violations perpetrated against Northern civilians.

Although Magnet’s Straussian blinders cause distortion of certain themes presented in the book, he offers a sound discussion of how the Supreme Court has legislated from the bench on myriad issues such as “[b]using, affirmative action, and abortion” (p. 60). He also recognizes that often the elected branches of government have been happy to see these contentious issues removed from their ambit. “Abdication,” Magnet writes, “went hand in hand with usurpation” (p. 55).

Since Thomas’s assent to the high court in 1991, he has, in Magnet’s estimation, consistently opposed judicial legislation and constitutional interpretations removing reasonable limits from congressional authority. For example, the book provides a good discussion of how the Court stretched the Commerce Clause to give Congress a general legislative power over all activities that might affect the national economy.

Magnet starts with Wickard v. Filburn (317 U.S. 111 [1942]), when the Court upheld New Deal legislation penalizing a farmer growing wheat for home consumption because his actions, if aggregated with other farmers similarly situated, could substantially affect the national market. Magnet sees this and similar cases as the living Constitution in action inasmuch as the Court approved a general, non-enumerated power of legislation.

Magnet also notes how the revolution with the Commerce Clause permitted the national government to wield “enlarged authority” through various administrative agencies (p. 65). He further delves into Thomas’s opinions focusing “on how these agencies increasingly undermine the original Constitution even more insidiously than Congress’s torturing the Commerce Clause” (p. 65).

Magnet recognizes that Thomas often writes in dissent, but does not believe that this minimizes the importance of Thomas’s words. The author sees Thomas playing the long game, writing for posterity much like John Marshall Harlan did with his dissent in Plessy v. Ferguson (163 U.S. 537 [1896]), when he inveighed against separate-but-equal constitutionalism and expounded the virtues of a colorblind Constitution.

Despite modern Court majorities blessing “benign discrimination” in the form of affirmative action in college admissions, Thomas continues to insist that any racial classification used by government is per se harmful. Unabashedly, Thomas argues that the beneficiaries of affirmative action in university admissions will likely either struggle in competition with more qualified students or, if they do excel and graduate, be tarred as undeserving because of racial preferences in admissions.

The life and jurisprudence of Clarence Thomas is underappreciated in American society. Readers can be thankful to Myron Magnet for placing the spotlight on Thomas and discussing his work on the Supreme Court. While Magnet’s devotion to Strauss distorts some aspects of Thomas’s work, on the whole it is a worthy read.