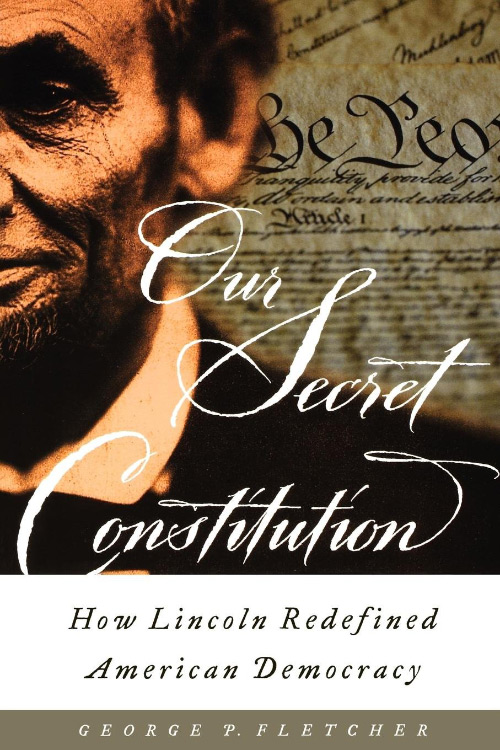 George Fletcher’s efforts can be viewed most profitably as an unmasking of U.S. constitutional development. Consider the title of his new work Our Secret Constitution. Within the U.S. political tradition, doesn’t a “secret constitution” appear oxymoronic? If it is secret, who are the individuals privy to the secret? Moreover, in what manner and to what extent does the secret constitution displace popular control and consent over the public policy? And finally, what about issues of legitimacy and political obligation? Contrary to the claim that Supreme Court activism under the leadership of activists represents the policy preferences of the majority (see Lucas A. Powe, The Warren Court and American Politics [Cambridge, Mass.: Harvard University Press, 2000]), the enforcement of a secret constitution that empowers a concealed cabal of decision makers at the expense of popular control is a major break from traditional U.S. constitutionalism. Not only does it permit the usurpation of national and state legislative prerogatives, but it bestows tremendous power on judges whose talents range from mediocre to dismal.

Concerns such as these, however, do not deter Fletcher. In his mind, the secret constitution is a classic example of the ends justifying the means. As he makes clear, egalitarianism is the desideratum of the secret constitution, and the courts are the most reliable conduits for the implementation of an egalitarian agenda. Not to be mistaken for the Fourteenth Amendment’s mandate of equality before the law, his equality is an ideologically driven constitutional equality legitimating activist government and the politics of substantial redistribution. Fletcher hits the mark when he credits Abraham Lincoln with redefining American democracy, thereby setting aside the traditional U.S. rule of law that valued liberty, order, and justice when it obstructed the quest for egalitarianism. He is far from accurate, however, when describing Lincoln’s derailment of the traditional constitutional system as the honorable act of a decent man. Yes, Lincoln “redefined American democracy,” as Fletcher’s subtitle suggests and as his text reiterates again and again, but the origins of that redefinition notwithstanding (see Thomas J. DiLorenzo, The Real Lincoln: A New Look at Abraham Lincoln, His Agenda, and an Unnecessary War [Roseville, Calif.: Prima, 2002]), Fletcher understands its consequences for current public policy. He seeks to displace the type of liberty that accommodates an unequal distribution of wealth with a leveling type of equality as the foundation of American republicanism. His endgame is not the Fourteenth Amendment’s equality before the law, but rather an economic equality that the framers of the Constitution would have found abhorrent. The book is essential reading not because of its historical views or interpretations of the Constitution, federalism, and U.S. jurisprudence, which are deficient, but because it is a revealing prescriptive tract of the liberal/radical agenda to transform the U.S. rule of law as a bulwark of private property and personal liberty into an instrument of government redistribution and social leveling. Moreover, as recent developments dating back to the Warren Court make clear, time and the courts are on Fletcher’s side.

Fletcher depicts the Constitution of 1789 as the guarantor of an elitist government that must be overcome. The war between North and South was a major step in overcoming the original Constitution and the elites it protects (p. 3) This lesson is an important one for the Lincolnphiles to learn. In speaking of Lincolnphiles, I have in mind not the historical Lincoln, but the ahistorical, messianic Lincoln promulgated by Harry Jaffa and his disciples. Jaffa’s Lincoln is a man committed to higher law and determined to atone for America’s sin of slavery and discrimination by supplanting the original Constitution with higher-law doctrines. However, one must be cautious in concluding that Lincoln would recognize himself in the picture Fletcher paints. The postmodern higher-law doctrines Fletcher advances are not necessarily compatible with Lincoln’s nineteenth-century worldview. Nevertheless, it is abundantly clear that Lincoln’s policies and rhetoric made Fletcher’s agenda not only possible, but increasingly probable of successful implementation. Jefferson Davis and the Confederate States of America were so committed to traditional U.S. constitutionalism that Fletcher’s agenda and similar agendas would have had no success if the Confederacy had survived. Therein lies the real tension between the North and South of the 1860s: limited versus unlimited government.

In promoting his ideologically driven jurisprudence that stands in opposition to traditional U.S. rule of law, Fletcher offers a highly imaginative interpretation. For example, the Thirteenth Amendment stipulates that “Neither slavery nor involuntary servitude ... shall exist within the United States, or any place subject to their jurisdiction.” According to Fletcher, “the issue of economic discrimination ... had never received due attention from the Supreme Court... . As race came center stage in the truncated area of ‘equal protection,’ the Supreme Court would ignore the tragedies of the states’ toleration of wealth and class discrimination... . Other countries have confronted the problem of wealth discrimination as an aspect of their commitment to equality. It will eventually be incumbent on the Supreme Court to do the same” (pp. 139–40). Fletcher surmises that an unequal distribution of property runs afoul of the Thirteenth Amendment’s prohibition against involuntary servitude because if “servitudes should be understood as relationships of domination, then an open-ended approach to the concept would have generated a watchdog role for the federal government in inspecting and supervising private relationships of potential exploitation and domination... . [The national] government [should be] the guarantor of equality and non-domination” (p. 140).

The problem with the antebellum South and the Confederate States of America, according to Fletcher, was the commitment to the original Constitution, which precluded the sort of national centralization requisite to displacing liberty with equality and, among other things, to empowering the Supreme Court with legislative capabilities. Ignoring a slew of case law to the contrary, Fletcher nevertheless condemns the postbellum Supreme Court for being too Confederate. In postbellum America, “[l]egalism prevailed. The legal philosophy of the Confederacy triumphed, both in substance and in style” (p. 139).

Praising a type of abstract justice “that inspired Marx” in an age “overflowed with vision—but not in the Supreme Court,” Fletcher criticizes the Supreme Court for its reactionary tendencies (pp. 120–21) Consider his analyses of the Supreme Court’s postbellum case law. On the surface, his analysis appears to be sympathetic to liberty, specifically the liberty of individuals to pursue their respective trades without state interference, but his real targets are the states’ police powers and free enterprise. He contends that this “was a period when the Court was much more concerned about the rights of economic competitors than about the dignity of individuals” (p. 171). Upholding the dignity of individuals requires that the Court move beyond race and into the realm of wealth discrimination. The Court must apply strict scrutiny, the highest standard, to issues of wealth discrimination. Replacing the rational-basis test—which permits state policies that tolerate distinctions between rich and poor in education, housing, travel, health care, and so forth—with strict scrutiny would make the poor (whom Fletcher never precisely defines) a suspect class and entitled to equal benefits. Pointing to German Basic Law as a model for U.S. courts to follow, Fletcher advances a “legal system [that] includes the furthering of equality in income and wealth ... [and] the leveling of differences in welfare and opportunity” (p. 159).

Fletcher’s quest to twist the U.S. Constitution to conform to a Rawlsian theory of egalitarian justice, his attempt to square the circle, results in fundamental inconsistencies. For example, on the one hand he maintains that “the rule of law requires, of course, courts that enjoy respect and legitimacy” (p. 257), but on the other he praises Lincoln for his treatment of Chief Justice Taney’s efforts to enforce habeas corpus (p. 167). He advocates human dignity but espouses a coercive form of government capable of denying individuals the fruits of their labors. He gives lip service to democratic ideals while promoting a form of centralization incompatible with popular control and consent. Moreover, one must not assume that the centralization he advances stops at national borders. His operative theoretical assumptions blanket the human family with a visionary egalitarian ideal of global redistribution.

The value of Our Secret Constitution is twofold: first, it inadvertently indicts Lincoln for the overthrow of the original constitutional order of states’ rights federalism, separation of powers, checks and balances, and the traditional U.S. rule of law; and second, it adumbrates how the new constitutional order is increasingly compatible with a system of egalitarian social justice that is inherently hostile to the rights of property and limited government.