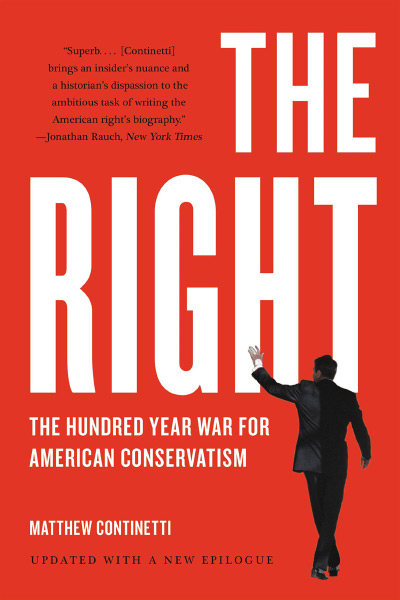 The Right
The Hundred-Year War for American Conservatism
By Matthew Continetti
Kindle Hardcover Paperback Audiobook
This book review is a web exclusive for the Fall 2022 issue of The Independent Review.

Although author Matthew Continetti seems to be sympathetic to the neoconservative perspective in his history of the right for the last century, he gives a largely fair shake to other strains of right-wing thought. Continetti correctly concludes that Ronald Reagan—a neo-conservative in policy who believed in rescuing military interventionism from the “Vietnam Syndrome,” preserving the New Deal while repealing some of the Great Society and blowing a hole in the budget by cutting taxes while enlarging federal spending as a percentage of GDP—has been overhyped in the lore of the right during the last century. Continetti could have gone even further (but didn’t) and concluded the Reagan myth is the right’s version of the left’s Camelot fable (John F. Kennedy). He does note, however, that Reagan was not elevated to the pantheon of gods on the right until he had left office. During his term, many conservatives were justifiably disappointed, and some downright angry, with Reagan’s policy record. Ironically, this elevation was done by the right in their frustration in countering the biggest federal budget cutter and post-World War II welfare reformer—Bill Clinton.

More recently, Continetti also correctly categorizes Trumpian nationalist populism as a rehash of the conservatism of Calvin Coolidge from the 1920s. Continetti seems to forget—as did Reagan, who as president had an image of Coolidge prominently displayed in the Oval Office—that Coolidge was a watered-down version of Warren Harding, whose policies Coolidge mostly continued. Yet Continetti does not ignore Harding, who was a much better president policy-wise than the appraisal of most historians—largely because Harding has been discredited among most historians by venal scandals in which he can be blamed for picking the wrong appointees but not for a direct role in the corruption. (This parallels the fate of Ulysses S. Grant in the late 1800s, who was also a better president than historians believe for the same reason.) Like Trump, Continetti notes that Harding and Coolidge were protectionist, anti-immigration, and more restrained in foreign interventions than their progressive predecessors. But if this is all Harding and Coolidge had done, they would have had much less laudable presidencies—with just the anti-interventionist feather in their caps.

However, Continetti correctly concludes that whereas Harding and Coolidge were trying to defend American institutions, the “demagogic” Trump was attempting to tear them down—much as did the populist Democrats of William Jennings Bryan, who also championed the social, cultural, and economic downtrodden in the 1890s. Curiously, Continetti fails to discover another important dissimilarity between Harding/Coolidge and Trump; he does mention that the presidents of the 1920s shrank the federal government’s spending as a share of GDP (the only other presidents to do so in the twentieth century were Dwight Eisenhower and Bill Clinton), slowed regulation, and cut taxes. Yet, Continetti does not contrast this laudable record with Trump’s continuing of Reagan’s and George W. Bush’s irresponsible blueprint for simultaneously winning votes by tax cuts while increasing federal spending, thus resulting in explosive deficits and debt (Trump accumulated debt per year at about twice the rate of even Barack Obama). Thus, for a century, despite conservatives putting “small government” at the heart of the rhetoric for their movement, when they govern, they have learned how to win votes in elections by simultaneously slashing taxes while continuing or enlarging popular federal spending programs. For example, Reagan increased payroll taxes and reduced benefits to save Social Security, George W. Bush made only a tepid attempt to privatize a small part of Social Security as a lame duck after safely winning a second term, and Trump declared during his 2016 campaign that Social Security and Medicare would be safe from reforms if he became president. Continetti attributes to Jude Wanniski the pioneering of tax cuts as costless political gold.

Most interesting is Continetti’s fulsome coverage of the life of William F. Buckley, the founder of modern conservativism. Although seemingly admiring Buckley throughout the book, Continetti concludes that Buckley’s neo-conservatism, and thus modern-day conservatism, were a negative response to the New Deal and the liberal (progressive) establishment. However, Continetti also admits to Buckley’s backing of Joe McCarthy’s demagogic attacks on the left, opposition to civil rights for African Americans, and support for racist segregation.

Unfortunately, even though Buckley eventually moderated publicly the latter two positions, blind hatred of the left and racism, they continued sub rosa in the conservative movement through the second half of the twentieth century into the beginning of the twenty-first century—until the right-wing populist movement of Donald Trump brought them gushing back to the surface from 2015 to the present. Buckley also laid the basis for the later abandonment—first in practice (during the Reagan administration) and then later even in rhetoric (during the early twenty-first century with George W. Bush and Trump)—of the goal of reducing the size of a massively bloated federal government. Of course, Trump took Republican big government further, even declaring proudly during the 2016 campaign that he had gotten rich by spending other people’s money, implying that he would do the same as president. And he did—big time with record spending, budget deficits, and debt.

In fact, the rise of Trump’s radical populist conservatism—with his back-to-the early twentieth century Republican positions on tariffs, immigration, and foreign military intervention, in contravention of most of the dominant modern post-World War II neo-conservative positions of William F. Buckley—one can become confused about what conservatives are conserving. Curiously, one major item that Buckley and Trump might agree on is the abandonment of the goal of reducing the federal government at home. Buckley downplayed this goal, which he realized would need to be compromised to counter the Soviet Union globally during the Cold War, which he seemed to believe required huge defense spending and restricting civil liberties at home. According to Continetti, Buckley realized that popular anti-communism during the Cold War could unite the various strands of conservatism—traditionalists, economic conservatives, foreign policy realists, former leftist anti-Soviet hawks, and religious conservatives. Trump never bought into even that much small government rhetoric, because he liked the image of being the tough, swaggering commander of the world’s greatest military and because he saw cuts to popular federal domestic programs as election losers.

Buckley also provided a populist-oriented blueprint for modern conservatism. The author reports that Buckley thought of his movement as a negation of the left establishment, telling journalist Mike Wallace in 1957 that “I am already a revolutionary against the present liberal order”; he said that his magazine, National Review, “stands athwart history, yelling stop” (pp. 99, 116). As part of Buckley’s populist bent, he also pioneered the modern-day conservative obsession with the ideological corruption and leftist politics “of cancel culture” in academia, which still diverts current conservative attention to such nonsense instead of coming up with innovative but practical solutions to everyday political, economic, and social problems. Research seems to show that excessively politically correct rhetoric and behavior in academia doesn’t much affect the real world; so why worry so much about it? Finally, ironically, in contrast to the First Amendment, Buckley and his fellow travelers thought some beliefs as beyond the pale in a civilized society, thereby supporting Joe McCarthy’s attempted cancellation of the few voices of a communism that never really took hold in individualistic American culture. Instead of following Thomas Jefferson’s admonition that disinformation should not be squelched but simply be countered with better information, McCarthy and Buckley merely besmirched the conservative movement and freedom of speech in America.

In contrast to many authors on the right, Continetti avoids caricatures of libertarian thinkers and explores the nuances of Fredrich Hayek’s thought. According to the author, Hayek did see a very limited role for the state, including sparse, easily understood, and transparently arrived at government regulations and some state-provided welfare, if it didn’t interfere with market mechanisms.

So, what can we learn for the future from Continetti’s fairly dispassionate history of the last century of the right? In this reviewer’s opinion, a lot. The right may still be able to win some elections, but Donald Trump’s candidacy, presidency, and post-presidency have demonstrated that many on the right are intellectually bankrupt. Evidence? The current vessel of the right is a Republican Party—which has degenerated into a personality cult with many of its members possessing a vitriolic hatred of the left and fear of rising minority populations—that didn’t even feel the need to field a policy platform for the 2020 election. Such populist hatred has become so blind that even constitutional principles and acceptance of fair elections are no longer sacrosanct, trampled underfoot to pursue it. Therefore, the right has once again defined itself negatively—that is, by what it is against rather than what it is for. Conservatives and libertarians should develop positive ideas of what they support instead of falling for demagogues’ red meat of hate and absurd culture wars. Instead of trashing the Constitution while claiming to save the country, how about “conserving” the nation’s founders’ program of small government, free markets, acceptance of immigration, and a humble foreign policy of commercial relations with all nations and political relations (alliances) with none.