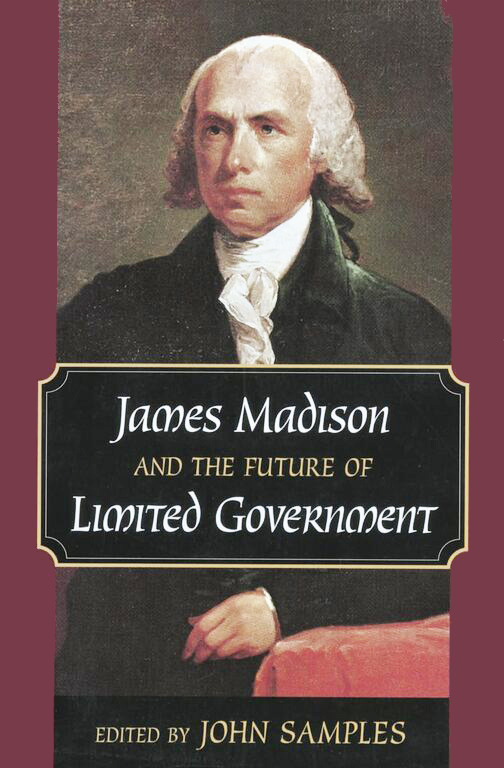 James Madison and the Future of Limited Government
Edited by John Samples
Kindle Hardcover Paperback
This book review appeared in the Fall 2003 issue of The Independent Review.

The lives and philosophies of the founding generations fascinate us, as a decade-long blizzard of new biographies and studies attests. James Madison and the Future of Limited Government is, however, neither biography nor study; rather, it is a debater’s handbook. It offers not a Madison for all seasons, but multiple Madisons for any season. Here readers will find handy bits of Madisonian wisdom with which to bolster their argument on any contemporary policy issue.

Do you, for example, demand direct democracy? John Samples, the collection’s editor and the director of the Cato Institute’s Center for Representative Government, introduces us to Madison the advocate of direct democracy. Although Madison in Federalist No. 10 bemoaned the evils of direct democracy, he would now endorse direct democracy, we are told, as the cure for the ills of today’s transformed polity: “Madison offered republic cures for political ills. . . . Scholars of American collective choice understand well the republican ills of our time: rent seeking and minority rule. Direct democracy provides a democratic remedy for these republican maladies” (p. 179).

Do you want to support multiculturalism and to advocate the common good? Tom Palmer presents Madison as a “real” multiculturalist who “openly embraced a pluralistic constitutional order [and] . . . believed that such was essential to maintain liberty” (p. 71). In addition, Palmer argues that Madison defined the common good as the protection of equal rights and property under the rule of law and thus “sought to create a stable system of government that can effectively promote the authentically common good and at the same time resist the natural tendency of human beings toward factional conflict” (p. 77).

Do you long for peace and believe that transnational government alone will ensure it? If so, you, too, can summon Madison in defense of your cause. In perhaps the most ingenious of the many clever essays in this collection, the philosopher John Tomasi mines a Madison essay that appeared in the National Gazette on February 2, 1792. Entitled “Universal Peace,” it concluded that “‘a universal peace . . . is in the catalog of events, which will never exist but in the imagination of visionary philosophers, or in the breasts of benevolent enthusiasts’” (p. 220). Nevertheless, Madison did offer, according to Tomasi, “some pacific remedies in the form of permanent and constitutional maxims of conduct” (p. 221). Not surprisingly, some were structural: “‘Each generation should be made to bear the burden of its own wars, instead of carrying them on, at the expense of other generations.’” Madison’s other maxims on free trade and free migration have long been cited by their advocates as inducements to international peace, but few have thought that such peace also requires some form of transnational government. Nevertheless, Tomasi indulges a Jeffersonian flight of fancy: “So maybe, just maybe, people who care most about liberty in our world today should be not only for the minimal state, but also for the biggest state of all. Maybe, just maybe, they should be for something like a global federal constitution, along the original American lines. James Madison may be a fount of ideas for that possible future” (pp. 222, 226). One is tempted to suggest that one ought not to dream of the biggest state of all until the minimal state has been secured.

Those who believe that Native Americans deserve reparations might find solace and encouragement in yet another surprising Madison, who was a staunch defender of Indian rights. Jacob Levy, a political scientist from the University of Chicago, explains that Madison found that “‘next to the case of the black race within our bosom, that of the red on our borders is the most baffling to the policy of our country.’” Although Madison favored a policy of assimilation, he “did not share the common view that Indians needed to take up farming in order to enjoy property rights that whites must respect” (p. 125). Madison realized that if “land could be seized from the unproductive and given to the productive, no property was safe” (p. 126). Indeed, he endorsed the claims of the Cherokee Nation, agreeing to give them $25,000 for the army’s spoilage of their lands and to grant them full veteran’s benefits for fighting with the Americans against the British in the War of 1812.

Those who long for a more traditional Madison will not be disappointed. Indeed, the practical, pragmatic Madison pops up repeatedly in these essays. In Forrest McDonald’s “The Madison Legacy: A Jeffersonian Perspective,” he is the “soberer if less original genius” who repeatedly moderates Jefferson’s theoretical excesses and thus vouchsafes us the America we know. As McDonald puts it, “Madison appears to be everywhere” in the real world of politics, whereas Jefferson merely inspires its latest gadfly (p. 68).

Similarly, Michael Hayes, in his essay on Madison’s religious views, characterizes Madison as an “adaptive conservative” who understood that “opposing religious factions are more intense and intolerant than groups pursuing mere economic advantage” (p. 155) and who thus sought to mitigate such factions’ impact by requiring the state to be scrupulously “neutral among religious denominations as well as between religious believers and nonbelievers” (p. 157).

Joyce Malcom, focusing on Madison’s work at the Constitutional Convention, describes him as a pragmatic innovator who studied the past, not to restore or perpetuate it, but to learn from it. Although she subscribes to the view that Madison lost more than he won at the Convention, she concedes that his “Convention colleagues endorsed his goals but disliked his means” (p. 52). Moreover, one might argue that many of the alternative means the delegates chose (for example, explicit prohibitions on certain state laws) were more effective restraints on state authority and less threatening to liberty than would have been, for example, the federal veto on state laws that Madison advocated. One can nevertheless sympathize with Madison’s plaintive comment to Edmund Pendleton: “‘The difficulty of uniting the minds of men accustomed to think and act differently can only be conceived by those who have witnessed it’” (p. 43).

Madison the defender of property is the subject of James Dorn’s essay. Dorn emphasizes that liberals who embrace footnote four in the Carolene Products case (in which the Supreme Court announced that it would no longer scrutinize legislative infringements of property rights as strictly as it reviewed legislative infringements of “personal liberties”) do not understand the importance of preserving property rights. Madison, however, did understand. He said that “‘persons and property are the two great subjects on which governments are to act; and . . . the rights of persons, and the rights of property, are the objects, for the protection of which government was instituted’” (p. 193).

Just as Madison regarded an equal division of property as an evil, he would have been aghast at the Court’s evisceration of the doctrine of enumerated powers. Roger Pilon makes that conclusion clear in another essay. Articulating the most concise and compelling exploration of the concept of enumerated powers this reviewer has read, Pilon emphasizes the simple truth at the heart of the doctrine: “if you want to limit power, don’t give it in the first place” (p. 29). Moreover, he demonstrates that Madison’s conduct as president reflected a deep conviction that the Supreme Court should “police the doctrine of enumerated powers, not as a matter of policy but as a matter or principles” (p. 31).

It is perhaps not surprising that a collection of essays should present many different views of Madison, perhaps the most gifted political thinker of his age. Yet the reader is left wondering: Is there a “real” Madison? Was he pragmatic or principled? Was he a high Federalist or a Jeffersonian Republican? The answer to all three questions is yes—which is to say that Madison, perhaps more than any other Founding Brother, embodied, articulated, and negotiated the tension between the conflicting values and aspirations of his generation. Americans have always been both pragmatic and principled; and it is as true today as it was in 1800 that, as Jefferson declared in his first Inaugural Address, “We are all Republicans; we are all Federalists.” That “reality” is why the most concise and prescient assessment of Madison’s relevance to contemporary America appears not in any of the essays, but on the book’s dust jacket, where Larry Sabato comments: “To know America, you must know Madison.” There is no better place to make his acquaintance than in this book.