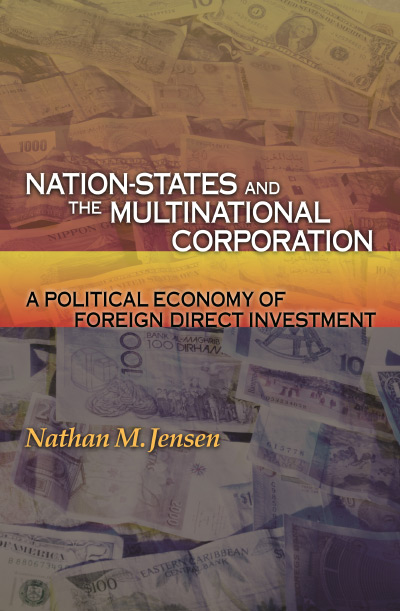 Nation-States and the Multinational Corporation
A Political Economy of Direct Foreign Investment
Nathan M. Jensen
Kindle Hardcover Paperback
This book review appeared in the Summer 2007 issue of The Independent Review.

How do a country’s political institutions influence the decisions of foreign investors to invest in that country—and, in particular, to invest in ways that give these investors control over the use of their invested resources? In Nation-States and the Multinational Corporation, Nathan Jensen tackles this question thoroughly and empirically. Jensen, an assistant professor of political science at Washington University, brings to this task considerable econometric skill, a workmanlike approach to asking questions and answering them patiently, and no evident political biases. His findings are credible, even compelling, without being banal.

Among his background assumptions is that “market-friendly policies” attract multinational corporations to make investments in a country, including direct investments (as opposed to “portfolio investments” in securities). This assumption makes sense. We need no econometric test to convince us that, for example, as the probability of the nationalization of oil wells increases in Venezuela, private firms will drill fewer oil wells there.

Jensen’s contribution is to explore in detail the consequences that different political institutions have on foreign direct investment (FDI). These political institutions are not policies, such as a decision to nationalize industries, but something closer to what James Buchanan calls “constitutional rules”—rules of the game that determine the character of the ensuing political process. Because such rules determine the course of processes, they are more open-ended and have more dimensions than specific policies, and their effects on FDI are not as obvious or predictable as the effects of many specific policies. So a sound understanding of such institutions’ effects requires empirical research.

Among Jensen’s findings is how little government fiscal policies affect FDI. In a summary of his findings on this front, he states: “Little evidence exists that government spending or taxation levels have a negative effect on FDI inflows. Government devotion to social security, often characterized as economically unproductive market intervention, does not deter multinational investments. More generally left-wing governments do not suffer from lower levels of FDI inflows. In sum, multinational corporations’ investment decisions do not seriously challenge government fiscal policy autonomy” (p. 54). These findings are not as surprising as they initially appear. Just as low wage rates are generally insufficient to attract huge investments, so, too, are low taxes. Of course, all other things being equal, firms prefer to pay lower rather than higher wage rates and, as Jensen readily acknowledges, lower rather than higher taxes. But “all other things being equal” looms large here because all other things generally are not equal.

Low wage rates, for example, usually signal low worker productivity. Once this low productivity is revealed, it is easy to understood why firms generally prefer to invest where wages are higher rather than where they are lower. Likewise with taxes, which are often (though by no means always) higher in countries that have more secure property rights. It is not at all surprising that the attraction of secure property rights can and often does swamp the repulsion of high taxes. Indeed, it is my sense that security of property rights goes a very long way toward reducing the ill effects of other harmful government interventions. (This sense, by the way, forms my theory of why France is as prosperous as it is!)

Jensen correctly interprets his findings as casting deep doubt on the “race to the bottom” thesis, which holds that competition among governments to attract increasingly mobile capital from around the world forces them to slash taxes, reduce spending, and repeal regulations that add to the cost of doing business. Other scholars also have found that this thesis lacks empirical support (see, for example, Martin Wolf, Why Globalization Works [New Haven, Conn.: Yale University Press, 2004], pp. 249–77).

If, like me, you are deeply suspicious of taxes, government spending, and statutory regulation, you may not welcome this finding. But look at the bright side: because the security of property rights makes up for many unjustified intrusions into economic affairs, the increasing fluidity of capital may well promote economic reform where it most counts—namely, in making property rights even more secure. Perhaps a race to the top is actually under way.

Jensen relates this difference to the number of “veto players.” A veto player is a person or group whose approval is necessary for policy to be changed. The greater the number of veto players, the more stable is policy, simply because getting many parties to agree to a change is more costly than getting fewer to agree. Investors generally like situations with many veto players because they are more stable and predictable, and democracies tend to have more veto players than authoritarian states do.

Over a substantial period of observation, democracies also appear to attract more FDI because only those countries that offer investment-friendly policies and hence enjoy economic growth remain democratic. (Jensen mentions this reason, but does not do much with it.) Countries that are now democratic but that fail to protect property rights are more likely than “market-protecting democracies” (Jensen’s term) to become autocratic. Widespread economic distress sparks not only revolution, but also forms of government that feature strongmen or messiah figures.

Jensen’s findings on the International Monetary Fund (IMF) deserve notice. Comparing different countries at the same time and looking at a variety of countries over the course of a few decades (1970–98), he finds that “signing on to IMF packages leads to 28 percent less FDI flows” (p. 145). This reduction occurs, Jensen argues, because the conditions that the IMF typically attaches to its financing force governments to adopt policies that scare away investors. Thus, the austerity measures designed by faraway bureaucrats for implementation by central governments seeking bailouts from international agencies poison the prospects for economic growth.

The bulk of Jensen’s book is a useful empirical investigation of the political factors that affect FDI. I have serious complaints only about some of Jensen’s throw-away lines in the concluding chapter. For example, he asserts that environmental protection, being subject to the free-rider problems featured in every economics textbook, is underprovided by the market and hence should be better promoted by international trade agreements. He never mentions, however, that economic growth has been empirically shown to promote environmental improvement. Because the need for environmental protection can easily be used in trade agreements to mask protectionist restrictions that reduce trade’s positive effects on economic growth, the case for including environmental-protection provisions in trade agreements is not as compelling as Jensen thinks. Such quibbles, however, do not detract significantly from Jensen’s substantial contribution. Anyone researching economic growth or trade policies will want to review his empirical findings, which are relevant and well grounded.