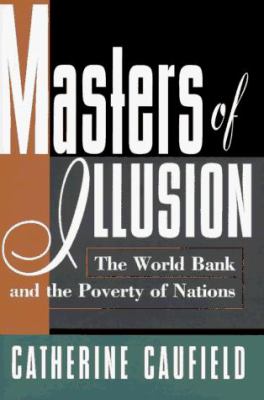 Masters of Illusion
The World Bank and the Poverty of Nations
Catherine Caufield
Hardcover Paperback
This book review appeared in the Spring 1998 issue of The Independent Review.

If an organization such as the World Bank could be put on trial for doing more harm than good while professing to do the opposite, and if investigative journalist Catherine Caufield were responsible for the prosecution, her book Masters of Illusion would appear to establish the organization’s guilt beyond a reasonable doubt. Her book is not an easy read, but its contents amply warrant the effort and provide a convincing case for the verdict.

Caufield presents a convincing case, and she is not alone in her conclusion. Other knowledgeable observers, including George Schultz, Allan Meltzer, Peter Drucker, and several former senior Bank officials and advisers, such as Alan Walters, Jaanik Lindbaek, and William Ryrie, also have called for the Bank’s “retirement.” Yet Caufield does not make it easy for the reader to absorb and retain the mountain of details she has assembled. Masters of Illusion is crammed with facts, numbers, and anecdotes; citations and quotations on macro- and micro-economic policies; observations on ecological externalities; project descriptions ex ante and ex post in a wide range of countries, regions, and subregions; and individual personality sketches of myriad senior Bank executives, including Bank presidents from Eugene Meyer to Eugene Black, Robert McNamara, Lewis Preston, and the Bank’s current head, James Wolfensohn, as well as three other Bank presidents in between. As a result of this extreme diversity of material and packaging, the book is more useful for reference than for continuous reading.

Caufield’s reach is extensive, her grasp thorough. In her description of the Bank’s enormous investments in and promotion of multipurpose dams throughout the developing world, she combines the standard statistics on costs (often overrun), scale, and time to completion (usually underestimated at the project’s inception) with personal interviews she has had with individual villagers displaced and sometimes devastated by the inexorable drive of the Bank’s projects. The pattern is repeated from Thailand to Pakistan, Iran, Zambia, and Brazil. Similar stories are told in detail for other major infrastructure projects promoted and financed by the Bank to develop railroads and roads in India, Colombia, Mauritania, and other countries.

The recurring pattern in her account of the Bank’s large loans for major infrastructure projects is one in which the Bank has persistently neglected the substantial negative externalities often associated with these projects. Caufield criticizes the Bank’s failure to anticipate the need for damage-limiting measures that it might have been able to provide if project development had taken these externalities into proper account. All things considered, the real costs imposed by Bank projects often appear to exceed their benefits.

Although acknowledging that the Bank has shifted much of its attention in recent years from heavy-infrastructure loans to investments in education and health, she finds that the Bank’s record in the field of social services is no better than its checkered performance in the infrastructure realm. For example, she recounts that “between 1990 and 1993, the Bank gave a rating of unsatisfactory to 27% of the education projects it evaluated, 40% of the health projects and 44% of the water supply and sanitation projects” (p. 293). And these ratings were provided by the Bank’s own staff rather than disinterested outside evaluators!

This exceedingly blemished record has been created, Caufield writes, by a Bank bureaucracy both “bloated” (p. 189) and extravagantly compensated. Leaving aside the two dozen highest-paid Bank executives, the average salary for Bank professionals in 1995 on an after-tax basis including benefits was $144,000, resulting in a finding by the U.S. General Accounting Office that Bank pay rates “exceed [those] in the public sector in all surveyed markets . . . and are more generous than those available in the United States.”

Among the numerous other significant findings and assessments Caufield presents are the following:

On the basis of the foregoing and other noteworthy points highlighted in Masters of Illusion, one may argue persuasively that the World Bank is something of an atavistic anomaly. At its creation five decades ago, world capital markets were thin and disrupted. Now they are hyperactive and burgeoning. About three-quarters of the total net flow of long-term capital to emerging-market countries takes the form of private direct investment, portfolio equity investment, and commercial-bank lending. In contrast to the situation prevailing as recently as a decade ago, foreign capital is readily available for sound and sensible investments as well as for risky but potentially highly lucrative ones. For countries that have already entered world capital markets, such as China, India, Indonesia, Brazil, and Argentina, the case for continued Bank lending appears weak. If instead the Bank, through the IDA, were to concentrate on lending on soft terms to the sub-Saharan countries unable to tap the long-term-capital market, a case for its continuance on a reduced scale could be persuasively argued.

The Bank’s new president (since the middle of 1995), James Wolfensohn, has disarmingly acknowledged that “the World Bank has got things wrong.” While aspiring to set them right, he notes that “every one of the things I’ve uncovered . . . has already been examined by my predecessors.” In light of the analysis of the Bank’s record over the past five decades presented by Caufield, it is not unreasonable to view Wolfensohn’s aspirations with a heavy dose of skepticism.