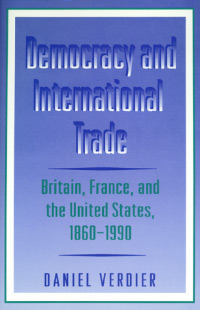 Democracy and International Trade
Britain, France, and the United States, 1860–1990
Daniel Verdier
Hardcover Paperback
This book review appeared in the Spring 1997 issue of The Independent Review.

How should we best discuss interdisciplinary questions? And what role do differing theoretical perspectives have in an analysis that borrows from multiple disciplines? What role does narrative play independent of any theoretical considerations?

These questions sprang to my mind as I read Daniel Verdier’s historical survey of the political economy of international trade in the three leading Western powers over the last century and a half. Verdier proposes to provide us with a general theory of the impact of political competition on trade policy in democratic regimes while guiding us through a historical overview that illustrates his main points. In particular, he wishes to criticize what he views as the partial explanations provided by economic analysis while more generally incorporating political actors into the model.

However, his book is oddly structured for such an endeavor, reading like two separate monographs only weakly linked together. The first part is a “Political Theory of International Trade,” which serves as a criticism of the existing literature and a schematic overview of Verdier’s own theories. The second part, 80 percent of the book, is a historical overview of trade policy that does not come to grips with any of the theoretical issues laid out in the previous section. By Verdier’s own admission, his aim was

not to submit the propositions to a systematic test, nor to deliver the definitive versions of British, French, and American modern trade history, but rather to show how easily the facts of these three national experiences line up with the categories and causal statements of part one and to contribute a new interpretation of these three cases.”

Therein lies the heart of my difficulty with this work. To my mind, Verdier’s theoretical criticisms are interesting but not decisive, and his mix of taxonomy and ad hoc hypothesizing is unpersuasive. The history is interesting for its own sake and is perhaps the best reason to read this book. But the cases he presents in no way serve as clear-cut illustrations of his complicated arguments; nor do they help us unravel the contradictions of mixing political analysis with rational choice theory or abstract models of political economy.

Let us treat the two parts and their corresponding merits separately. On the theory of trade policy: surely no one in either economics or political science believes that rent seeking, the median voter theorem, or state autonomy is a complete and all-encompassing explanation for political economic policies. The goal is to develop abstract models that proceed from the core presumption of rational choice theory, that understanding flows from properly representing different group interests, and then to analyze their interaction using the tools of supply and demand while taking into account the differing constraints of the political sphere and the administrative bureaucracy. The difficulty lies in deciding which features are central and which details can be left out without damaging the analysis irremediably. It is undoubtedly true that in their zeal for clarity and simplicity, many theorists are apt to throw the political baby out with the institutional bath water, preferring to play mathematical games that engage the mind without providing any insights into policy. But the fact remains that the public choice literature and the more theoretical work on voting models have constituted two of the most important contributions of economic and political theorists to the creation of a new political economy. Indeed, Verdier makes full use of the panoply of rational choice models to develop a variety of sub-theories regarding interest-group behavior in the context of political competition in a democracy. He shows an impressive breadth of knowledge of the theoretical literature in economics and politics and understands the basics of mathematical modeling.

What is different is Verdier’s more complicated but not particularly clearer taxonomy of interest groups and their relation to the electorate. And it is not clear that all the parts fit together. His theory of electoral delegation does not seem well laid out, and its implications are not fully developed in the abstract presentation of the first few chapters. Hence it is all the more troubling that he shies away from directly confronting his theory with the historical cases so that we might better understand why he views his framework as a superior vehicle for understanding the evolution of trade policy in democracies. Some of this confusion may arise from differences in style between economists like me and political scientists like Verdier. But ultimately the broad sweep of the possibilities and promises Verdier presents in the opening chapter is never quite matched in subsequent analysis.

If I am baffled by the weaknesses of the book’s theoretical sections, I found much of the interest in the more straightforward historical cases that make up the bulk of the book. Verdier gives us half a dozen historical case studies of trade policymaking in Britain, France, and the United States, focusing on the effects of interest-group politics while annotating well-known historical episodes. It seems as if every major trade issue from Cobden-Chevalier to the Monnet Plan and GATT is sketched in a few deft strokes and then treated intelligently and cogently.

Given the enormous sweep of Verdier’s overview, I hope I will be forgiven if I focus on a few episodes of particular interest to me to highlight our areas of disagreement. Overall, I am concerned about the author’s inability to distinguish between the economic importance of a tariff and its political relevance. For example, Verdier makes much of the struggle in nineteenth-century France over the protection of iron manufacturers. Although this issue may have loomed large in the politics of French protection, it played a trivial role in overall French trade when weighted by its economic importance. Political struggles over an economically minor issue might seem to have greater significance than a routine and uncontroversial tariff modification for a class of goods with a greater weight in overall trade. Any analysis that attempts to locate the influence of politics on economics must come to grips with assessing the actual rather than the perceived effect of various policies. For such an assessment, the political record is a poor guide. To take a modern example, not everyone may be aware that a fairly elevated, even prohibitive, tariff on laptop screens or microchips would be likely to have a much smaller effect on American trade than a minor adjustment in various agricultural or textile duties.

Closer to my own heart, Verdier has cited my work on nineteenth-century British and French tariffs but doesn’t seem to have drawn any useful lessons from this research. He ignores the evidence of extremely high British average tariffs in the nineteenth century and much lower French tariffs, calling the former “revenue” tariffs and the latter protective. But as I have argued (“The Myth of Free Trade Britain and Fortress France: Tariffs and Trade in the Nineteenth Century,” Journal of Economic History 51 [March 1991]: 23–46) and subsequent research has revealed, the distinction between revenue tariffs and protective tariffs is not easy to make. Most important of all, the British tariffs did have important protective effects that were large relative to the much smaller effects of the French tariffs. The evidence clearly indicates that Britain, when one appropriately weights her duties, had higher tariffs than France for nearly three-quarters of the nineteenth century, and further research has only served to underline the severity of British restrictions on trade, particularly from France. Although the problem of developing an appropriate comparative index is still a pressing one, the issue cannot be finessed by looking at either the intent or the nature of a tariff independent of its weighted effects on overall trade. This inattention to the economic importance of a policy causes me to look with some suspicion on much of the discussion of tariff policy in the twentieth century, which is unaccompanied by systematic quantitative analysis.

Most of the chapters in the second part make much of the various lobbies and voting factions and their effects on policy choices. For period after period, we read plausible stories of how this configuration of interests or that voting group accounted for some switch in policy regime. There is good correspondence between the policies being profiled and the observable “objective” interests. Although Verdier does an admirable job with the narration, he does not specify which predictions flow smoothly from a particular analytical focus and which are just sensible observations that anyone would make regardless of theoretical perspective. Indeed, given the rather generalized treatment of lobbies and interest groups, I am surprised that one would need to confine the analysis to democratic regimes, as the author seems to. One could well argue that even the authoritarian regime of Napoleon III was quite responsive to interest-group pressures and that these groups stood well within the analytical compass of the theories employed by Verdier.

In a book so far-reaching, it is also a bit jarring to see so much attention placed on the voting blocs and so little on the institutional structures of the state and the economy. Only the institutions that seems directly tied to electoral or state-level issues are considered, but given the interest-group story being told, more attention to regulation and the domestic economy would have been welcome.

Despite my various criticisms, anyone with serious interests in trade policy should have this book. Its wealth of political and historical detail is quite astonishing, and the cases provide much food for thought. Probably no one will be able to absorb all the anecdotes and examples in less than several readings. Researchers seeking to ferret out patterns for analysis or study will need years to absorb all the material Verdier has included and will find much of interest in his comments.