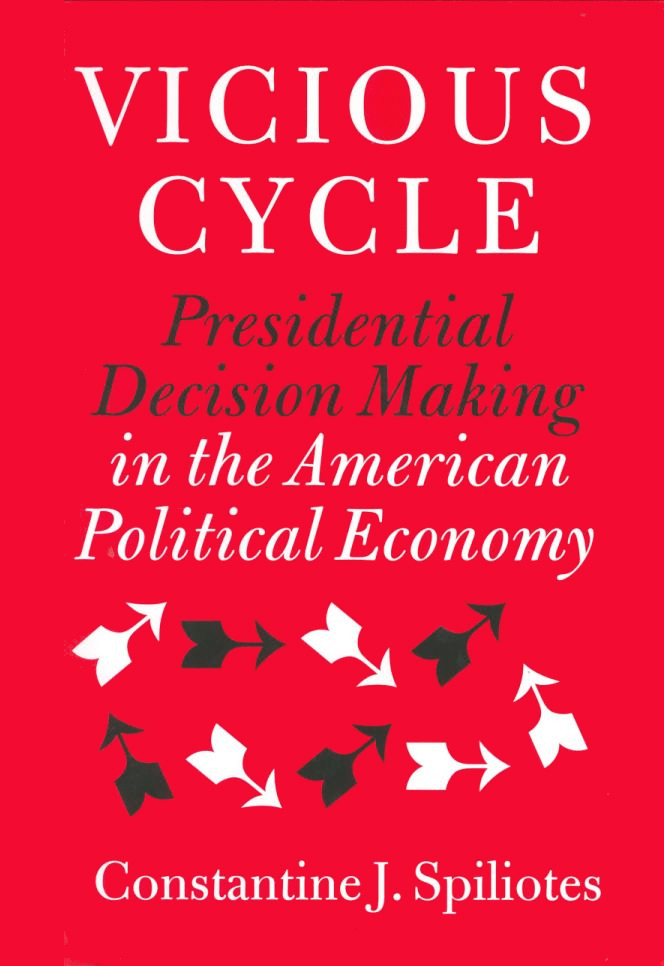 Two competing theories explain the types of decisions presidents make in their management of the U.S. macroeconomy. The first theory suggests that presidents respond to partisanship and that an ideological compass generally directs Democrats to choose Keynesian unemployment-fighting strategies and Republicans to choose fiscally conservative anti-inflation policies. The second theory, often called the political business cycle and made famous by the work of William Nordhaus and Edward Tufte, maintains that presidents are motivated by reelection and attempt to loosen fiscal and monetary policy as they approach the final year of their initial term. The country then experiences lagged costs of this policy when the chief executive has been safely returned to the White House.

To these theories, Constantine J. Spiliotes now adds a third. His new book, Vicious Cycle: Presidential Decision Making in the American Political Economy, is essentially an explanation and empirical vindication of what he calls the “institutional responsibility” model. He argues that “the institution of the presidency acts as a filter on the pursuit of political incentives, shaping and directing the ways in which presidents pursue their macroeconomic objectives” (p. 4). It does so because presidents are given a mandate for sound macroeconomic management. This charge cannot be found in the Constitution. It is, Spiliotes persuasively argues in chapter 2, a product of the first half of the twentieth century, during which a series of statutes (including, most important, the Budget and Accounting Act of 1921, the Reorganization Act of 1939, and the Employment Act of 1946) not only forced the president, as the only elected official with a national constituency, to protect aggressively the macroeconomic health of the country, but also demoted Congress to a marginal and essentially reactive role. These responsibilities modify presidential responses to the partisan and electoral incentives that the established models of presidential decision making in the political economy claim are dominant. The result is that modern White House decisions on the economy have been remarkably consistent across time as most presidents, regardless of partisan stripe, experienced the pull of a heterogeneous constituency, the desire for a positive legacy, and the moderating effect of a Congress controlled by the other party. Presidential policy is largely contingent on where in the “vicious cycle” the United States finds itself. It is meant to fight unemployment at the expense of inflation when the former threatens and to do the opposite when wage and price increases loom larger than job losses.

Spiliotes rigorously tests this model of institutional responsibility. He initially collects all decisions made by presidents from 1953 to 1996 concerning recommendations that the country’s macroeconomic policy be geared primarily toward fighting unemployment or combating inflation. These 103 proposals (51 with inflation as the subject and 52 with unemployment) then form the dependent variable in his quantitative analysis of partisan and institutional models of presidential decision making. Spiliotes also undertakes an evaluation of voluminous archival material on the economic policies during the initial terms of the Eisenhower, Johnson, Carter, and Reagan presidencies. He believes the data show that these presidents did not advocate policies to increase economic growth close to elections for purely electoral purposes. Indeed, Eisenhower and Carter explicitly rejected such an approach, the former looking to balance the budget in 1956 and the latter wanting to tackle rampant inflation in 1980. The chapters in which Spiliotes examines the decisions of these four presidents are especially illuminating.

The central problem with the book is that Spiliotes does not clearly define or satisfactorily delineate institutional responsibility so that the concept blurs into the partisan and political business-cycle models. He argues that “contingent upon the nature of the most pressing macroeconomic problem during a reelection year, presidents work to move the macroeconomy in a particular direction, one that will make them look fiscally responsible (and presidential) in the eyes of the public on election day” (p. 143). Presidents therefore do not unhesitatingly embrace economic expansion. But is this objective not just another kind of electoral incentive? Americans like good economic management and generally want their presidents to steer a smooth course roughly halfway up the Phillips curve. Spiliotes argues that presidents confront the vicious cycle out of a sense of “institutional responsibility.” This argument, however, implies a set of motives palpably distinct from the electoral connection.

Spiliotes is correct to criticize the partisan and political business-cycle models, and in this regard his book is imaginative and important. He would have been better advised, however, to provide a modification of the political business-cycle model and to argue that prudent macroeconomic management, not expansion, drives presidential decisions in the run-up to the election. Or, alternatively, he could have argued for a revision of the partisan model, suggesting that the contemporary parties are surprisingly similar in their economic thinking. The New Deal consensus enveloped the Republican Party (remember Nixon’s “We are all Keynesians now”), and its unraveling has afflicted the two Democratic presidents since the stagflation of the 1970s. Carter, after all, did not just fight inflation; he also uncharacteristically, for a Democrat, began the deregulation revolution. Clinton, after Reagan’s brief experiment with “supply-side” economics, took to budget balancing to finish a job his immediate predecessor, George Bush, had started. Indeed, a beef I have with the book is that it has an extremely static view of Democratic and Republican economic philosophies. Spiliotes claims, for example, that Eisenhower’s policy of fiscal stimulation “represented a particularly startling shift for a Republican president, given that the last member of the party in office was Herbert Hoover” (p. 114). It is as if the New Deal had no effect on the Republican Party.

It is true that presidents make macroeconomic policy, whereas Congress is generally more interested in distributive issues. Presidential decision making on the economy, therefore, does have an institutional dimension. But we knew this already. Everything else Spiliotes presents is interesting and compelling, but his book breaks theoretical ground only in its criticism of extant models. A really strong and independent theory of institutional responsibility would find policies that straddled several administrations of different parties—a kind of cumulative, collective, and constant effort toward a goal shared by all occupants of the office. There’s just too much partisan and historical variance in the data, however, for such straddling to be the case.

There are problems with the empirical work as well. In his quantitative analysis of the data, Spiliotes creates “rational partisan” and “institutional responsibility” models designed to explain the decision to advocate macroeconomic policy inconsistent with the president’s expected partisan behavior. The discussion of the performances of these two models focuses on the behavior of critical explanatory variables. Spiliotes shows that presidents are more likely to deviate from predicted positions if, for example, unemployment and inflation are high, directly after a midterm election, during unified government, and as their term wears on. This is all well and good. But the author wants to compare the models (made up of a series of variables) head to head and therefore should focus the discussion on a comparison of goodness-of-fit measures rather than on the performance of individual variables. In this regard, albeit with the divided-government variable performing counterintuitively, the rational partisan model actually fits the dependent variable better than does the institutional responsibility model. It would have been better if Spiliotes had combined variables in a single model and examined how the performance of each illuminates the competing approaches. A key “matchup” is the year of the president’s tenure (measured one through eight) and the midterm variable that measures whether or not the president’s policy proposal occurred before or after the off-year election. The former is a proxy for the institutional responsibility model, the latter for the rational partisan model. Because they measure different things and are not highly correlated, the two variables could have been placed in the same model.

It would be wrong, however, to conclude a review of Spiliotes’s work on this note. This book is an ambitious and intelligent systematic analysis of presidential policies toward the macroeconomy. Spiliotes’s discovery that presidents reject conventional partisan approaches at similar times in their presidencies is new and important. His portraits of economic policymaking in the Eisenhower, Johnson, Carter, and Reagan administrations are very interesting. Vicious Cycle deserves shelf space in the library of every scholar of economic policy and the American presidency.