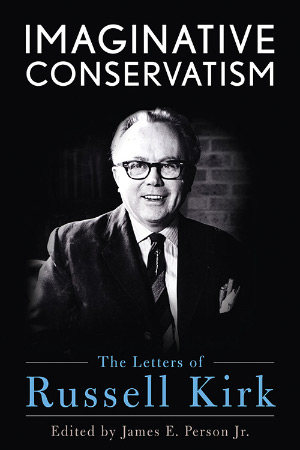 With this volume of Russell Kirk’s letters, James E. Person Jr. fills a gap in our knowledge of Kirk. The letters collected here span nearly the full length of Kirk’s adult life and are organized by decade, beginning in the 1940s. Person introduces each letter, helpfully setting each one in context. Unfortunately, few letters from the 1940s survive; those that do are for the most part written to Kirk’s mother, Marjorie Kirk, and his friend William C. McCann. Subsequent decades are much better represented. Collectively, these letters give us a portrait of Kirk’s character, his loves, his likes and dislikes, his development into a mature public intellectual, his political commitments, and the progress of his literary life. There are no surprises in these letters that would contradict the very strong impression communicated in his other works that he was a man of civility, decency, great intellectual seriousness, and deep cultural conservatism. The letters confirm him in these fine qualities while permitting us a closer look at his personality and daily life.

The early letters show us Kirk as first a spirited student (pp. 17–18) and then a soldier during World War II. Kirk never saw action; he remained stationed at Dugway, Utah. Moreover, he never participated in the antics of his fellows soldiers (pp. 29, 33). Thus, he escaped the war with his life and dignity intact. In place of either strife or merriment, Kirk offers us delightful sketches of the land around the base (pp. 24–28, 38). He was clearly a young man sensitive to beauty, including natural beauty.

As Kirk matured into his forties and beyond, he wrote to a broad range of people, and these letters are well represented. The letters likely to draw the reader’s immediate interest are those written to public figures, including conservatives such as T. S. Eliot, William F. Buckley, Henry Regnery, and Ray Bradbury. Kirk’s letters to Eliot have a special note of respect and even deference (p. 83). His interest in Eliot culminated in the publication of Eliot and His Age in 1971. The letters to Buckley (addressed to “Dear Bill”) offer us a window into what developed into a long and comfortable friendship. In Kirk’s reply to one of Buckley’s letters, we gain insight into Kirk’s religious sensibilities. Asked to answer a series of questions as part of Buckley’s research for his book Nearer My God (1997), Kirk wrote a lengthy, twelve-page response. About his own journey to faith, he tells Buckley: “I was not ‘converted’ to the Church, but made my way into it through what Newman calls illation—fragments of truth collecting in my mind through personal experience, conversations, knowledge of exemplars, and much reading and meditating.” Kirk was told by a priest that “most people seeking knowledge of church doctrines came to him out of some psychological distress or want. It was not so with me: rather, I still was seeking the source of wisdom” (p. 340). The overall impression given by Kirk’s own small “autobiography of faith” (to borrow the subtitle of Buckley’s book) is of a man at peace with himself, secure in the sources of his belief, and confident that he could defend his faith from intelligent skeptics.

Beyond letters to famous conservatives, he also wrote kind and supportive letters to Richard Nixon during his presidency, after he resigned from office, and then again after PatNixon died. These letters are significant for understanding Kirk’s conservatism, given the distance many conservatives came to place between themselves and Nixon. Writing to Nixon in 1971, Kirk told him “that some rather doctrinaire conservatives of our acquaintance . . . tend to forget, from time to time, that conservatism is not a strange set of immutable rules of policy, fixed as the laws of Lycurgus, but instead a way of looking at man and society: a cast of mind and character, governed indeed by certain sound general principles, but capable of prudential application in different ways in varying circumstances” (p. 157). Nixon was a complex man, and Kirk’s letters to him are a reminder to those conservatives disappointed by Nixon that as president he had genuine accomplishments. And they are a reminder that as a former president Nixon suffered to a degree that should evoke the sympathies of any decent person.

Kirk’s letters outline the boundaries of his conservatism in two important respects: he was not much of a capitalist, and he did not hesitate to jab at libertarians and (as his letter to Nixon makes clear) doctrinaire conservatives. Though Kirk supported the free market, economics was not a central concern of his, either politically or in his own life. At a time in his life when his cohort were well on their way to economic security, he wrote: “As for worldly goods, we are poorer than church mice, and I never know how the monthly bills will be paid” (p. 212). We also learn that “I never have owned a share of stock or bond; have no regular life insurance; have no savings account in banks; never speculate (lacking the money, even had I the will); have no regular income from any source” (p. 244). It is therefore not surprising to read of his impatience with those who make a lot more room in their thought for economic gain. In a letter to the Intercollegiate Society of Individualists (a libertarian forerunner to the conservative Intercollegiate Studies Institute), Kirk was sharply critical of libertarianism: “I am afraid I scarcely see eye to eye with you people. . . . On particular issues, we are very close; on philosophical postulates, a great gulf is fixed between us. I never call myself an individualist; and I wish that you people hadn’t clutched that dreary ideology to your bosom. Politically, it ends in anarchy; spiritually, it is a hideous solitude” (p. 67). In general, Kirk rejected what he termed “the doctrinaire zealots of the ‘Right’” in favor of those men of the left or right open to being persuaded of the truth of the deeper cultural premises of his brand of conservatism (p. 105).

In addition to those he regarded as ideologues, Kirk also had aversions to certain other types of people. His intellectual self-confidence, earned through years of hard work and demonstrated achievements, made him impatient with colleagues who second-guessed his literary judgements. And he exhibited scorn toward anti-Semites (pp. 91, 97).

Many of the letters Kirk wrote were apolitical and dealt with personal matters. All the same, they collectively give us insight into his political views. If we take seriously Kirk’s view that particulars matter, that a man is more than the sum of the abstract ideas he holds, we are then able to see in his letters how he sustained and enriched the particulars in his own life and how those particulars in turn sustained and enriched him. His friendships and family life reveal a man warmly receptive to and capable of reciprocating love. His deep attachments to his home in Mecosta, Michigan, and his ancestral home in Scotland tell us of the importance of place to him. Again and again, he charitably offered a bed in his home and a seat at his table to particular needy people (pp. 211, 244).

In his final letters, Kirk acknowledged his physically enfeebled condition, and he could see that his life was coming to a close. Even so, he continued to offer his home to visitors and his thoughts to correspondents. His mental powers appeared to be undiminished—a blessing for anyone, but a special blessing for a man who had lived a life of the mind.

It is difficult to reconcile these letters with the picture of Kirk that has come to us—from others and from Kirk himself—as a shy man (p. 340). Although Kirk’s letters are certainly neither flamboyant nor florid, they are emotionally expressive. They place the reader in the company of a man who was warm, charming, intelligent, and, in his own way, quite sociable, and they are sure to evoke in the reader the wish that he or she could have known Kirk.