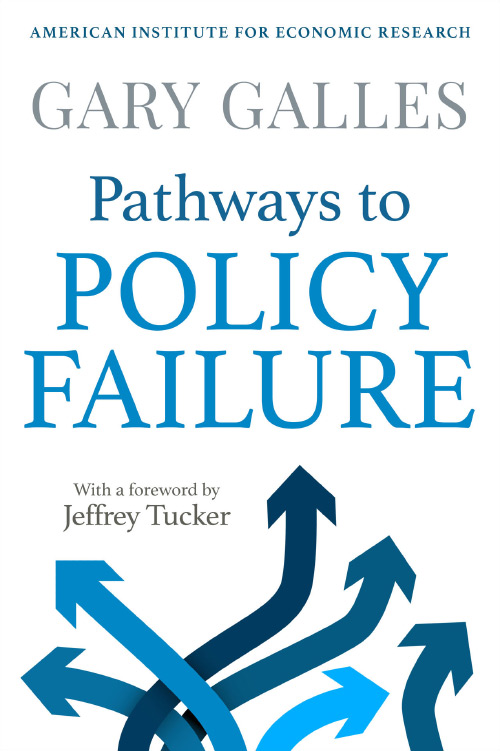 Pathways to Policy Failure
By Gary Galles
Kindle Paperback
This book review is a web exclusive for the Fall 2021 issue of The Independent Review.

I always tell my students that economics is perhaps their most important course, as it is not about money or the stock market or personal finance; rather, it is the study of choice and how individuals exchange in different institutional settings. Indeed, economics presents a framework to analyze and understand how politicians’ actions affect our daily lives as citizens and voters.

I teach my principles-level class as if it is the only economics class students take. Specifically, I cover foundational concepts and use policy issues to demonstrate negative unintended consequences of government intervention. Students learn to examine policy effects on all groups and consider long-run effects—the main point in Henry Hazlitt’s Economics in One Lesson.

Economics professors should make students better consumers of politics and educate voters. In addition, because many students have been influenced by more “progressive” instructors, free market economists should offer a balance by exposing students to free market thinking on a wide range of policy issues.

In today’s social media world, everyone is an “expert” in public policy and economics. As Murray Rothbard said, “It is no crime to be ignorant of economics, which is, after all, a specialized discipline and one that most people consider to be a ‘dismal science.’ But it is totally irresponsible to have a loud and vociferous opinion on economic subjects while remaining in this state of ignorance” (1970. “The Death Wish of the Anarcho-Communists.” The Libertarian Forum. Volume II, No. 1).

Robert Solow wondered “Why does public discussion of economic policies so often show the abysmal ignorance of the participants? Why do I so often want to cry at what public figures, the press, and television commentators say about economic affairs?” (cited in William Baumol, Alan Blinder and John Solow. 2020. Economics: Principles and Policy. 14th edition, Boston: Cengage).

Unfortunately, many students seem brainwashed by logical fallacies and are encouraged to “get involved” based on economic errors and philosophies antithetical to liberty and choice. These include:

Thomas Sowell explained that “The first lesson of economics is scarcity: there is never enough of anything to fully satisfy all those who want it. The first lesson of politics is to disregard the first lesson of economics” (1993. Is Reality Optional? and Other Essays. Stanford: Hoover Institution Press). Economics professors should ban the “F word”—free. There is always an opportunity cost even if there is a zero price. People have to understand that trying to achieve zero pollution, zero deaths or zero risk is not only impossible, but also extremely costly. There are trade-offs.

When it comes to political science, the average person has little knowledge of the Constitution and the debates between Federalists and Anti-Federalists that took place before its ratification. Most students (and voters) are ill-versed in the limited government philosophy of our founders.

In light of these distressing facts, Gary Galles’s Pathways to Policy Failure is a timely book for the American electorate and an excellent resource for economics students who are seeking to learn about unintended consequences of government intervention. Published by the American Institute for Economic Research (AIER), the book is divided into four sections. Galles, a professor of economics at Pepperdine, explains why people support certain public policies despite well-understood negative effects. He notes how his research led him to Paul Heyne, the great economics educator and author of the classic The Economic Way of Thinking. Heyne’s observations and teaching philosophy led Galles to ask the central question: “How have people so often been convinced that what turned out to be policy failures—often egregious ones—were good ideas? Addressing those pathways that can lead us from good intentions to policy failures is the focus of this book” (p. xvii).

Galles holds a classical liberal position on economic issues. He is even-handed when it comes to criticizing politicians in both parties, including Bernie Sanders, AOC, Elizabeth Warren and Donald Trump. However, he does use Democratic policies more often in his examples of poor thinking. He does an excellent job introducing readers to John Locke, Frédéric Bastiat, Ludwig von Mises, Friedrich Hayek, Milton Friedman, Thomas Sowell, Henry Hazlitt and Leonard Read. He also cites other contemporary free-market thinkers including David Henderson, Deirdre McCloskey, Steven Horwitz, Peter Boettke, Edward Stringham, and Ben Powell. This makes the book a valuable resource for readers to further their knowledge of free market economics. Galles explains basic philosophical principles, such as positive and negative rights, and ties them to practical applications of various public policies and government interventions. The book does an admirable job of explaining a range of issues from economics concepts to political philosophy and the Constitution. The individual essay format makes it an easy read.

Pathways to Policy Failure is divided into four sections:

I will present an overview and analysis of each section.

The theme is the many misrepresentations of the free market economy. Galles takes issue with the idea of markets as “dog-eat-dog” and capitalism as a system of Darwinian “survival of the fittest”; colorful language that often misleads people. Galles uses examples of how misrepresentation of the market economy allows officials to put their “weighty thumbs on the scales when weighing how society should be organized to deal with various issues” (p. 3).

This section introduces Galles’ thinking on the role of government, the error of focusing on benefits but not costs, and the relationship between positive and negative rights. He refers to the Silver Rule, that is, “do not do unto others what you would not have them do unto you” (p. 65). Indeed, as Galles points out, the government “takes the gold” with respect to violating the Silver Rule.

Markets involve peaceful cooperation. The “weak” prosper because free markets enrich all our lives; in a market economy the consumer has ultimate power. Entrepreneurs get rich by making our lives better. Charges of “greed” and “cutthroat competition” are disparaging terms. Ironically, those criticizing capitalism benefit most from it.

Galles ends with quotes from Walt Whitman that advocate limited government, a nice way to remind readers of what this philosophy entails.

The theme is how language can be used by politicians to help pass foolish legislation. Referring to George Orwell, Galles writes, “That is our political situation today even more than when he wrote. After all, we have added demands for political correctness, woke-ness, ‘social’ justice and more, each of which can make foolish thoughts more prevalent, since Orwell penned those words....Since language is the basis of thought, lax language that misrepresents reality will lead to conclusions that misrepresent reality”(p. 118).

Galles explains Karl Marx’s use of the word “capitalism” to imply that owners of capital exploit workers; in fact, workers are the main beneficiaries of free market institutions. He effectively explains the hypocrisy of those who criticize capitalism. For example, consumers are not described as “greedy” when they bargain for the lowest price; however, businesses are somehow greedy when they raise prices. As I point out to my students, it is interesting how the same individuals who think businesses are greedy by not paying higher wages do not consider themselves greedy when they want a raise. Galles also tackles “trickle-down economics,” a disparaging label used to describe supply-side economics.

On one point I disagree. Galles writes, “Mutual gainers don’t complain that their voluntary dealings impose injustice on them” (p. 152). However, I have heard countless complaints about being “ripped off” after voluntarily buying a product. Many still complain about being “taken advantage of” by their employer even though nobody forced them to work for their current employer. Obviously, their revealed preference proves that the purchase or accepting the job was worth it and better than the alternatives. Nevertheless, people still complain, as if they have a right to the private property of others.

Measurements You Can’t Count On

Galles reminds readers that while statistics are often used as the basis for public policies, they cannot always be relied on to be accurate or intuitive. Government officials have an incentive to omit the true costs of a program while overstating the benefits. Dubious multiplier effects are highlighted when it comes to government spending but not how the spending is going to be financed.

Statistics can be used to justify public policy because the average person may not be aware of statistical methods; Galles argues that “statistical self-defense” can protect us from being misled.

Galles examines Social Security, “Obamacare” and Medicare and suggests how these are made to appear more efficient than the private sector when the opposite is true. He also points out how infant mortality rates are misused to make the U.S. healthcare system appear worse than it is.

Galles focuses on particular policies and explains their “pathway to failure.” He discusses interventions in the price system, tax and transfer programs, and government protectionism. Ample evidence proves that good intentions do not necessarily lead to good results. Often, when government tries to help it does the opposite.

The structure of the book makes it an easy read. Galles explains positive economic analysis and presents moral questions that must be considered with public policies. I recommend this book for economics classes and for people who want to learn more about policy and government intervention. For economics classes, select chapters can be integrated with a textbook, or the entire book could be assigned. Many economics students come to the classroom influenced by instructors who believe that capitalism is evil and that government must solve society’s problems. Galles’ book is an effective and timely tool that can be used to balance student perspective and highlight truths regarding economic freedom and government intervention.