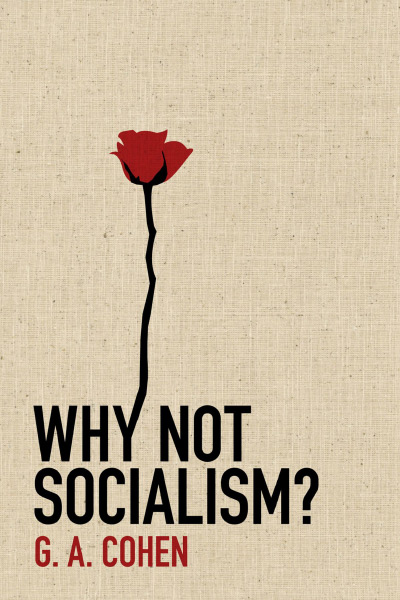 Why Not Socialism?
G. A. Cohen
Kindle Hardcover Audiobook
This book review appeared in the Winter 2010/11 issue of The Independent Review.

Defending socialism is a tall order these days, so it is a bit surprising to see an unabashed attempt. The late G. A. Cohen was a distinguished political philosopher at All Souls College, Oxford, and an important critic of libertarianism. His 1995 book Self-Ownership, Freedom, and Equality, for example, is a challenging and searching Marxist criticism of Nozickean libertarianism. Distinguished philosophers such as Hillel Steiner and Jonathan Wolff have offered high praise for Why Not Socialism? Thus, if anyone can defend socialism successfully, perhaps Cohen can in this book.

The book’s brevity—only ninety-two very small pages—and its largely jargonfree writing suggest that it is meant for nonspecialist readers. One presumes that it is intended for classroom use, and for that purpose I suppose it can be useful. But Cohen’s argument in this book is so weak that the book’s main effect, I fear, would be to show that socialism has no plausible defense.

The book is puzzling as much for its omissions as for its commissions. It proceeds, for example, as if the political events of the twentieth century did not take place. It offers no assessment of—indeed, no mention of—the numerous attempts to establish socialist states or the fall of the Berlin Wall and the collapse of the Soviet Union. It presents no comparison of North Korea and South Korea or China and Taiwan. It does not mention Cuba. There is, moreover, no indication in the book that the discipline of economics has made any progress since Marx.

The book’s positive argument fares no better. Cohen describes an imaginary camping trip made by several different families, and he argues that the trip proceeds according to two principles—“an egalitarian principle” and “a principle of community”—that together capture the socialist vision of a just society. Because he thinks any reasonable person would have endorsed his two socialist principles as exemplified in the conduct of the camping trip, he argues that we should therefore endorse these principles in society generally. He briefly entertains two potential objections to this inference—namely, that the ideal he describes is not desirable and that it is not feasible. Claiming that these objections hold no water, he concludes that the camping trip’s socialist principles are indeed what our governments should adopt for all of us.

A great deal hangs, therefore, on Cohen’s description of the camping trip. Here is the opening description:

You and I and a whole bunch of other people go on a camping trip. There is no hierarchy among us; our common aim is that each of us should have a good time, doing, so far as possible, the things that he or she likes best (some of those things we do together; others we do separately. We have facilities with which to carry out our enterprise: we have, for example, pots and pans, oil, coffee, fishing rods, canoes, a soccer ball, decks of cards, and so forth. And, as is usual on camping trips, we avail ourselves of those facilities collectively: even if they are privately owned things, they are under collective control for the duration of the trip, and we have shared understandings about who is going to use them when, and under what circumstances, and why. (pp. 3–4)

A few pages later, Cohen confesses that he does not enjoy camping trips (p. 9); from the preceding description, one might infer that he has never been on one. Consider all the ways this opening description goes wrong. First, there is no hierarchy among us? Why not? No one, for example, knows the area better than others or has more camping experience than others and thus has opinions that should be given more weight? Do the respective households have no heads? Is there no natural leader or two to whom people will, de facto if not de jure, defer when conflicts arise or when group decisions must be made?

Moreover, why would we assume that our “common aim” is that “each of us should have a good time”? Perhaps we all care about that goal to some extent, but each of us presumably has other aims as well, including some that are much more important to us individually or within our own families than is the “common aim” Cohen identifies. Perhaps I want to teach my children to fish. Perhaps you want some time away from social activity and hence want to be left alone. Perhaps another person wants to hike and explore, and yet another wants to read a book. Any of these aims, none of which is jointly shared, might be more important to us than making sure others are having a good time.

Finally, where did all of those “facilities” come from? Where did we get the pots and pans, canoes, soccer balls, and so forth? Cohen is oddly unconcerned with the question (see pp. 19–20), but in the real world goods do not appear out of nowhere—quite an important point to keep in mind if one wants, as Cohen does, to adapt principles from his imaginary camping trip and apply them to actual human society. Cohen further suggests that these facilities are under “collective control.” Actual camping trips might well involve sharing and even mutual sacrifice, but no one would presume to challenge or deny individuals’ or individual families’ private ownership and title to their things. A principle such as “if you bring your child’s toy to a group camping trip, expect other kids to play with it too” is perfectly reasonable, but it neither assumes nor implies that the toy is not still yours or that you do not retain authority over it.

Cohen’s description of the camping trip, on which the rest of the book’s argument relies, therefore betrays a series of mistakes that have traditionally compromised socialist thinking: implausible assumptions about human nature and the nature of human social institutions, a strange lack of concern for where goods and services—and wealth—come from, and even the building of a socialist conception of ownership into the initial description, which begs the question.

Cohen’s description of the trip includes brief discussions of episodes such as one person’s being naturally better than others at fishing (pp. 7–8), another’s having luckily stumbled on “a huge apple tree, full of perfect apples” (p. 8), another’s inexplicably being the only person in the group with the bizarre natural skill of being able to crack the nuts they’ve found (pp. 8–9), and yet another person’s realization that his father had dug the nearby pond and stocked it with fish thirty years earlier expressly in the hope of his son’s being able to eat well from it (p. 9). The discussion of each of these episodes is designed to forestall a claim that an opponent of socialism might make in support of a different political-economic order: the first suggests that your ability to produce more than another depends on an undeserved natural talent and that therefore you have no claim to its produce; the second that your good fortune results from sheer luck and again therefore you have no claim to exclusive enjoyment of it; the third that your skill is undeserved and that therefore you have no right to hold out for a higher price for its use. The lesson from the fourth case is less clear; it might be meant to suggest that what your father intended thirty years ago is irrelevant in decisions made today or perhaps that because you did nothing to deserve the pond and its fish, you may claim no special title to it.

Because the book is so short, we cannot expect detailed discussions of the philosophical principles involved in these cases—even if Cohen oddly suggests that the book is not merely a preliminary case for socialism, but that its argument “stacks up on further reflection” (p. 1). But each moral Cohen wants to draw from these scenarios has obvious rejoinders, and Cohen does not deal with any of them. Consider just one that applies to the conclusions he draws from all four cases. Human beings respond to incentives, so one might wonder what kinds of behavior we are encouraging and what kinds of behaviors we are discouraging by transforming fundamental social institutions such as property, ownership, and reward from “individual” to “collective.” Given plausible assumptions about human motivations, it seems likely that under socialist collectivism people will be discouraged from developing or using their “undeserved” skills that enable higher production, from seeking out “lucky” discoveries from which all of us can benefit, and from saving and amassing rather than simply consuming wealth from which future generations can benefit. The prediction, then, is that the incentive structure created by socialist collectivism will lead to declining wealth and prosperity—and several political experiments of the twentieth century seem to confirm this prediction. Alas, however, this possibility receives no mention in Cohen’s book.

The rest of the book, unfortunately, does no better. Cohen argues, for example, that the “[s]ocialist [notion of] equality of opportunity seeks to correct for all unchosen disadvantages” (pp. 17–18, emphasis in original), without acknowledgement of the difficulty, even impossibility, of eliminating all unchosen advantages (perhaps recombination of people’s DNA would be required?). He claims that the market “is a casino from which it is difficult to escape, and the inequalities that it produces are tainted with injustice for that reason” (pp. 33), but he fails to mention that it was and remains precisely the socialist states that coercively prevent their citizens from escaping, whereas market-based societies such the United States are the destinations that people choose. Cohen claims that what motivates people in the market is “typically some mixture of greed and fear” (p. 40); the socialist state he advocates instead operates, he claims, on a principle of “communal reciprocity” by which I serve you “because you need or want my service, and you, for the same reason, serve me,” and we jointly reject “cash reward” as the basis of our interactions (p. 39). But consider the following four questions, to all of which the answer arguably is “no”: Is “greed and fear” an accurate description of agents’ motivations in market conditions? Is that what these agents themselves believe? Do advocates of market-based societies agree that these are the motivations that the “market brings to prominence” (p. 40)? Do the available relevant empirical data support Cohen’s claim? Moreover, Cohen’s version of “communal reciprocity” sounds like an apt description of how a family works or perhaps should work, but why should we believe that the family’s model of love and service is appropriate or even desirable—let alone possible—for an entire community? Finally, how would a socialist state operating on Cohen’s principles overcome the knowledge or calculation problems that many economists have argued are intractable without markets?

If Cohen has answers to these questions, he does not offer them in this book; indeed, he gives no hint that he is even aware of them. According to the book’s back cover, Hillel Steiner commented that the book “[b]rilliantly captures the essence of the socialist ethical complaint against market society.” If so, then supporters of market society have little to fear.

James R. Otteson
Yeshiva University and Fund for American Studies
Culture and SocietyGovernment and PoliticsLaw and LibertyPolitical Theory
Subscribe Buy This Issue Get the App