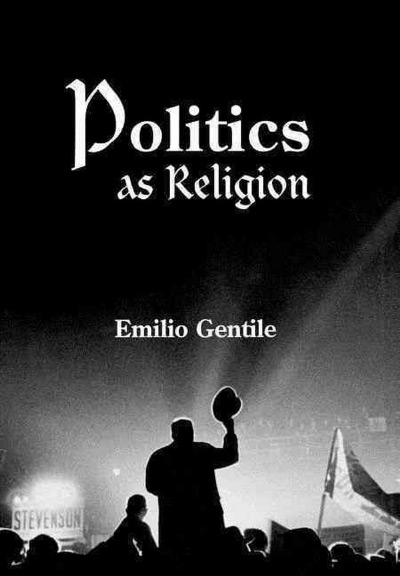 Politics as Religion
Emilio Gentile. Translated by George Staunton
Hardcover
This book review appeared in the Spring 2007 issue of The Independent Review.

In his most recent book, which appeared in Italian in 2001 with the subtitle Fra democrazie et totalitarismi, Emilio Gentile, professor of contemporary history at La Sapienza University of Rome, dwells on a theme that he has researched for decades, the sacralization of political symbols and political authority in twentieth-century Europe. Gentile writes as an engaged researcher who is still preoccupied with the legacy of Italian fascism and who plainly views the Catholic Church as a wholesome check on temporal power. He believes that the temptation to treat political ideologies as a form of religious revelation has been especially strong in the modern era. This trend has asserted itself as traditional ecclesiastical authority has declined and as secular political institutions have grown more potent. Italian fascism, we are told, exemplified this modern sacralizing temptation because the Mussolinian state claimed for itself a transcendent significance. Indeed, it refused to recognize any legitimate source of command beyond its purview. Epitomized by the precept “niente fuori dello stato” (nothing outside the state), fascism presented itself as both a religion and a political movement (pp. 34–36). It became by intention an exercise in state power, falling back on sacralizing language and iconography to describe its nature and purpose.

Gentile extensively quotes German philosopher Eric Voegelin, who in 1938 during the Nazi ascendancy produced The Political Religions, a pioneering study in the relation between statist ideologies and the appeal to sacral symbols and millenarian expectations. Gentile emphasizes Voegelin’s investigation of “the forms in which totalitarian regimes created political cults” (p. 56), but he also points to pertinent observations that preceded Voegelin’s work. Catholic critics, who included popes and other prelates, had been struck by how modern ideologues borrowed from religious ceremonies and redemptive paradigms, a practice that had been going on from the French Revolution to Bolshevism and fascism. The fact that in the case of the fascist state the parallel was made from across the political spectrum, from leftist Italian exiles to Pope Pius XI, rendered it especially persuasive.

Gentile shows easily that the Catholic hierarchy issued some of the sternest criticism against the fascist appropriation of religious symbols. Attempts to invest the state with a religious mystique ranged from ceremonies celebrating the Italian nation and its sacred Roman origins to a nationalist hagiography and the description of the fascist state as an epiphany changing all of human history. As Pius XI noted with justification in 1931, the fascists continued to impose their own “religion,” despite having concluded an agreement with the Vatican in 1929 about independent spheres of authority. Catholic schools and Catholic youth organizations were under increasing pressure to adapt themselves to a fascist cult of the state (p. 95). But, not surprisingly, during the interwar years, the church welcomed various attempts to appropriate fascist organizational techniques for clericalist purpose—hence, the good relations the papacy cultivated with Austrian “clerical fascism” in the early 1930s and with Antonio Salazar’s “New Order,” set up in Portugal in the preceding decade (p. 90). Such regimes were anti-Marxist and Catholic traditionalist, but they featured one-party rule and elaborately staged party rallies. Such alliances, all the same, should not be confused with support for more authentic fascist experiments, nor should the Italian fascist experiment with the incorporation of some anti-Semitic restrictions up to the late 1930s, and even thereafter, be equated with the full-blown terrorist regimes that came to power in Nazi Germany and Stalinist Russia.

This observation leads to my critical reservations about Gentile’s work—for example, the contrast between “democracies” and “totalitarianisms” posited in the Italian subtitle. Are they the only two possible forms of government in the present or the recent past? One can certainly think of other forms, some mentioned by Gentile in passing, such as predemocratic liberal parliamentary ones, authoritarian regimes exemplified by Salazar’s New Order, the present Moroccan monarchy, and the regime of Mussolini’s invention until his leap into darkness in the late 1930s. Although Gentile holds up the Catholic Church as a bulwark of democracy, he does notice that it sometimes moved in other directions. The papacy welcomed, as perhaps it should have, given the leftist alternative, the authoritarian government established by Mussolini’s Austrian ally Engelbert Dollfuss. And Pius XII, then a newly elected pope, declared his jubilation in March 1939 when General Franco took Madrid, which was then the last major Spanish Republican stronghold. Neither choice, although understandable, would fit the democratic grid then or now. Gentile’s quotations from the antifascist priest Luigi Sturzo and the social-democratic Catholic philosopher Jacques Maritain hardly exhaust the gamut of Catholic opinion in the 1930s (pp. 68–87). Catholic social democracy does not represent the once dominant political preference of the papacy, which long fancied monarchy and an alliance of throne and altar.

A more clearly questionable assumption that Gentile makes outright concerns the characterization of Italian fascism as totalitarian. Nation-states have been latching onto religious symbols since early-modern times: the frontispiece of Thomas Hobbes’s magnum opus Leviathan features an exalted personal sovereign towering high above the lords temporal and ecclesiastical and over the symbols of their authority. It was not Mussolini but Hobbes who first opined that the Leviathan, understood as the sovereign state, is man’s admirable approximation of divine handiwork (Leviathan [New York: Collier Books, 1961], pp.19–20), and it is possible to quote other early-modern political and legal theorists who would have seconded Hobbes’s efforts to build up the sovereign state. Other works, such as Renzo De Felice’s multivolume study of Mussolini (Mussolini il fascista: L’organizzazione dello stato fascista 1925–1929 [Turin: Giulio Einaudi, 1968]), offer a different picture of Italian fascism from the one Gentile favors. Felice famously depicts the Italian interwar leader as a powerbroker presiding over a fragile coalition of workers, the owners and managers of industry, and the broad middle class terrified by the revolutionary left. Although Mussolini quarreled with ecclesiastical authority, relations between church and state were even worse under the liberal national monarchy that had existed in Italy before World War I. The church had threatened to excommunicate those who participated in that anticlerical regime.

In the United States, Mussolini did not generally suffer from the monstrously tyrannical image that Gentile assumes. From the New Republic and Franklin D. Roosevelt’s brain trusters on the left to Catholic corporatists on the right, Americans considered him a social reformer. (See Patrick J. Diggins, Mussolini and Fascism: The View from America [Princeton, N.J.: Princeton University Press, 1972]; and Wolfgang Schivelbusch, Entfernte Verwandtschaft: Faschismus, Nationalsozialismus, New Deal 1933–1938 [Munich: Carl Hanser Verlag, 2003]). Having drawn his country out of the chaos of the post–World War I era, which was plagued by anarchist violence, and introducing a limited welfare state, Mussolini, unlike Hitler, elicited the approval of Churchill, Roosevelt, and other Western leaders. Despite his swagger, there is no evidence that he or his henchmen killed more than a handful of people, until, that is, Nazi Germany took over his government in 1943. By the standards of other authoritarian leaders, Mussolini was not notably brutal and tolerated at least some classical-liberal and Catholic criticism of his rule. Unlike the current welfare-state democracies, the Duce did not undertake extravagant statist experiments, such as radically altering inherited gender relations or requiring the social approval and celebration of what European Christians until recently regarded as aberrant sexual behavior. Had Hitler not come along and succeeded in bringing him into his vicious orbit, Mussolini might have departed the world stage as little more than a historical curiosity. Although this leader might have been much more sinister, Gentile does not demonstrate that he was and never shows the reader convincingly why he should be cast into the diabolical company of such villains as Hitler and Stalin.

Even less subject to demonstration is Gentile’s unsubstantiated conclusion that at “the start of the third millennium, civil and political religions appear everywhere to be receding” (p. 136). Although he does not know “whether they [political religions] will exist in other forms,” the signs look good, at least for the present. In the United States, we are told, Protestant triumphalism long held the upper hand, but then necessary change came along in 1960, and thereafter “the civil religiosity of conservative republicanism, with its powerful charge of nationalistic pride, was followed by the renewed religiosity of democratic republicanism, which under the first Catholic president, John F. Kennedy, was more directed toward civil and social values.” Soon even happier changes would occur, albeit after two assassinations, which may have been a small price to pay for such benefits. “The Kennedy myth was incorporated into the American civil religion, which, according to some observers, was revitalized by the experience. However, it was no longer conducted in a nationalistic and triumphalist manner, but reflected the American nation’s humility and its reliance on universal values that went back to its origins and were the very essence of its mission to the world” (p. 134).

Such statements are full of contradictions. One can easily challenge Gentile’s praise for the Kennedy era even without bringing up Chappaquidick and the latest Kennedy-clan sexual and drug escapades. No evidence is given that President Kennedy pursued a more restrained foreign policy than his avuncular Protestant predecessor. It is also not made clear why we should consider the presidencies of the 1960s more honest and less overreaching than those of the supposedly triumphalist 1950s. Many books, including an especially revealing tome by Seymour Hersch (The Dark Side of Camelot [Boston: Little, Brown, 1997]), refute Gentile’s portrait of the Kennedys as teachers of “humility.”

Even more disturbing is Gentile’s failure to recognize the obvious about America’s “mission to the world.” One would be hard pressed to find a more telling example of sacralizing politics and nationalistic arrogance than what Gentile deems laudable about U.S. foreign policy. Why is this mission, which he defends, less arrogant than Mussolini’s claim that his country should dominate the Mediterranean and recover its former colony in Abyssinia? The answer, we must assume, is that Americans, as depicted by Gentile, are spreading “universal values”; even so, had the Duce been a bit more clever, he might have devised such a cover for his own overseas adventures.

Gentile might cogently illustrate his sacralizing politics by doing a book on the foreign-policy rhetoric of George W. Bush, with flashbacks to similar tendencies during the reign of Bill Clinton and Madeleine Albright. In this hypothetical work, he might focus on the moral and providential mission revealed in Bush’s second inaugural and State of the Union addresses. The president’s call to missionize globally for “universal values” betokens shocking religious triumphalism turned into Enlightenment piety, despite the problem that it is taking place after the Kennedys had allegedly taught us humility. And because we are talking about a disorder that has beset the world’s only superpower, this megalomania should be of vital concern to analysts of “political religions.” Allow me to note that Gentile’s practice of for the most part sparing modern America and “the democracies” from his stinging criticism has become the established practice among American movement conservatives. After the usual references to Eric Voegelin and portentous warnings about “Islamofascism,” we are told about how American democracy is counteracting the newest outbreak of “political religions.” This analysis is unfortunately never carried beyond the level of propaganda and thus does not explain the effects of the same epidemic raging at home.