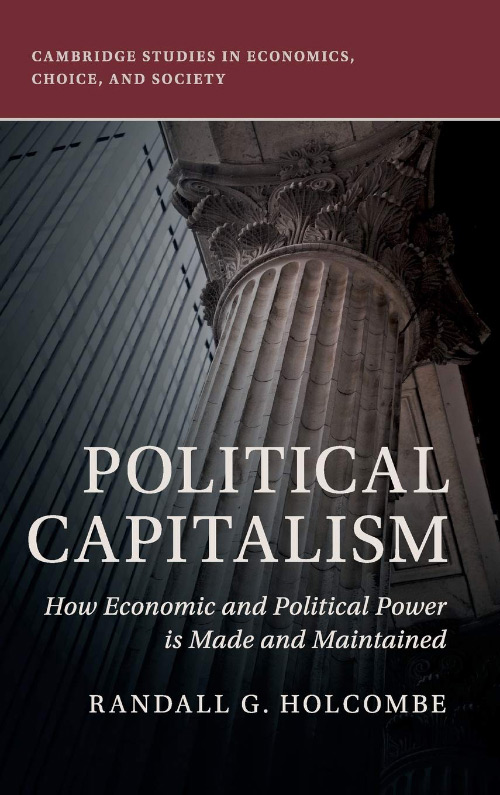 Political Capitalism
How Economic and Political Power Is Made and Maintained
Randall G. Holcombe
eTextbook Hardcover Paperback
This book review is a web exclusive for the Winter 2020/21 issue of The Independent Review.

Randall Holcombe has emerged as one of the premier scholars working on connections among economic and political systems. In this book he brings together many of the strands of work he has developed separately; the result is an important step forward in our understanding of commerce, in diagnosing the problems of “cronyism,” and in perceiving at least the outlines of a “cure.” Holcombe makes an important observation at the outset, one that reminded me of the bon mot often attributed to Mark Twain: “Everyone talks about the weather, but no one ever does anything about it.”

Well, everyone recognizes that cronyism has metastasized in the American economy and in economies across the world. But as Holcombe says, cronyism is “well recognized, but what are primarily recognized are the symptoms of political capitalism, not its causes” (Emphasis added, p. x). So while we talk a lot about cronyism, we haven’t done anything about it because we have not thought in a comprehensive and critical way about the causes.

Holcombe begins with a plausible, in fact innocuous, definition: political capitalism is a social (economic and political) system where elites cooperate for their mutual benefit. As a student of James Buchanan, Holcombe is deliberately riffing on the core of public choice, which holds that we should think of politics as exchange, and of course we also think of markets as exchange. There are two difficulties, though, in political capitalism:

1. The exchange, and the consent to the terms of the exchange, in political capitalism gives standing to a subset of the population. In standard public choice terms, this is a problem of “externality,” except that the externality is not a market failure but a political failure. A few, in cooperating for their mutual benefit, impose harms on those not involved in the “exchange.” Contracts in restraint of trade enforced by state action, subsidies, favorable regulation, and bureaucratic favoritism all benefit political actors, and corporate actors, but impose disproportionate costs on workers and consumers. Alternatively, power concentrated in the form of unions may impose disproportionate costs on small business, legacy corporations, and consumers. The shared feature of these arrangements is the transfer from the many who face diffuse costs to the few who garner concentrated benefits. No one, and this is important to emphasize, no individual is acting irrationally. But the system dissipates more than all the benefits created, so that the solution requires that such arrangements be blocked in the first place. This is a standard result in the rent-seeking literature, of course (J.M. Buchanan, R.D. Tollison and G. Tullock (eds.), Toward a Theory of Rent-seeking Society. College Station: Texas A&M. University Press, 1980), but Holcombe does a nice job of explaining the problem in system terms rather than focusing on idiosyncratic examples.

2. The exchange takes place over implicit auctions for the right to rewrite the rules, not to create value by exchanging value. While it is true that it really does benefit an industry to secure subsidies or protections from competition, and it really does benefit legislators or bureaucrats who can “sell” such favors and exploit the public trust, it is not true that this exchange creates value. This diversion of creative energy away from the pursuit of honest profit toward the creation of a labyrinthine thicket of legal requirements and stages where innovators must secure the “permission” of regulators imposes what Mancur Olson (The Rise and Decline of Nations: Economic Growth, Stagflation, and Social Rigidities. Yale University Press, 1982) called “institutional sclerosis.”

More simply, then, the system of rent-seeking dissipates resources in pursuit of favors, and the system of rules created in the process slow innovation and sharply reduce the number of mutually beneficial exchanges that can be negotiated and acted on. The costs of benefits foregone is hard to measure, but Holcombe is at some pains to document the scope and depth of the problem.

Holcombe argues for his particular definition and name for the phenomenon being analyzed: political capitalism. This is not a mixed system, in his view; it is a system, a clear basin of attraction in the landscape of institutional arrangements. Political capitalism is attractive in the sense that other systems (including free market capitalism!) tend toward it, and it is stable in the sense that once it is established it is difficult to reform or redirect. Holcombe adduces five components of political capitalism: elite theory, transaction costs, rent-seeking, Tullock’s “transitional-gains trap”, and what he calls “the regulatory state.” He argues that elites, created by discontinuities in power (pp. 44-45), should be incorporated in more traditional public choice approaches (p. 170). The distinction, standard in both Marxist and non-Marxist elite theories, fits comfortably into this niche: Elites control or exchange influence to induce the state to establish more favorable rules, and masses accept the results even if such outcomes are clearly against mass interests. This is the distinguishing feature of political capitalism for Holcombe (p. 1, p. 256), and constitutes the main theoretical contribution of the book, in my view.

Given that the mass public would benefit from other arrangements, and that the size of the gains would enable the gainers to pay off the losers, why is the system stable? The answer is standard public choice doctrine, combining the problems of collective action (Mancur Olson, The Logic of Collective Action, Cambridge, MA: Harvard University Press, 1965) and transaction costs (Ronald H. Coase, “The Problem of Social Cost,” Journal of Law and Economics 3[1960]: 1–44). Mass “groups” are latent, and face much higher organization costs than elites, compared to the individual benefits of organizing. Consequently, “the people in the high-transaction cost group . . . find themselves subject to the policies designed by those in the low-transaction cost group” (p. 76).

Third, expanding on Tullock’s classic concept (“The Welfare Cost of Tariffs, Monopolies and Theft,” Economic Inquiry 5 [1967]: 224–32), Holcombe describes the problem of making rules and policies the subject of commercial interest. The nice thing about Holcombe’s treatment is that this expansion takes an institutional form, where political capitalism is distinctive: more than just the Marxian “class consciousness,” the key feature is that elites recognize the selling, and the seeking, of rents is indefinitely repeated. Political institutions are honed and refined to encourage rent-seeking and to reduce the deadweight losses that arise as a result of rent-dissipation. (p. 132).

The next component, Tullock’s “transitional gains trap” (“The Transitional Gains Trap,” Bell Journal of Economics 6, no. 2 [1975]: 671–78) addresses the notion that state “benefits” become embedded in the system. The rents that subsidies create are immediately capitalized in equity prices or expectations about payments, so that owners once again make normal returns. After the one-time gains of the original owners, the collection of which may be arbitrary, any attempt to reform or claw back the benefits will be fiercely opposed because the system now depends on the continued subsidy. Of course, this gives political elites leverage, often handled by making such rents (farm subsidies, minimum wages) expire every few years and require renewal, giving legislators an opportunity to pass the hat. Holcombe notes that regulations are intentionally written to afford such discretion, along the lines of the “fire alarms and police patrols” model (M. McCubbins and T. Schwartz. "Police Patrols and Fire Alarms." American Journal of Political Science 28 (1984): 165-79). To facilitate this interaction: “Regulations are often written in obscure language, making interpretation difficult and subject to . . . discretion. . . . This opens a clear advantage to the well-connected” (p. 267). This creates permanent “careers” for lobbyists and highly technical regulation specialists, searching for and maintaining special privilege (pp. 135–37).

The last feature of political capitalism, the regulatory state, creates just such opportunities, and enables lobbyists to serve first in government, and then to work for the private sector, having mastered the arcana that lubricate the system. Given the expense of entering this guild, the services of such secular cleric are very expensive, reinforcing the result that only elites, who by definition have lower transaction costs and more resources, are able to influence regulation (pp. 148–55).

The latter portions of the book highlight the links between state and markets by adding another factor: progressive ideology. Democracy could be (in principle) a system of self-governance under constitutional constraints, in which voters elect representatives that carry out constitutionally limited functions. But (according to Holcombe) this conception of democracy is inconsistent with the progressive worldview, which holds that the justification for the state is to improve the welfare of the society and to direct its economic and commercial processes in light of social justice. Any constraint on the action of progressive elites, in this view, is a restriction on the ability to do good, and should therefore be thrown off and constitutional restraints ignored (p. 175).

In a way, there is very little here that is new. But the synthesis, scope, and scholarly depth of Holcombe’s treatment are a very important contribution. This is a book I will read again, and soon.