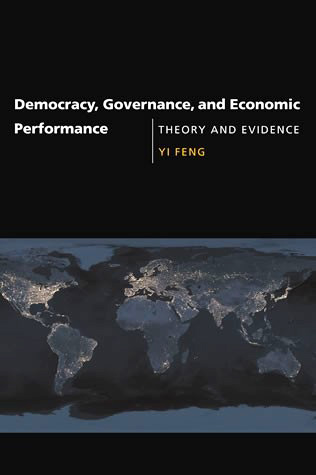 In Democracy, Governance, and Economic Performance, Yi Feng provides a panorama of some great puzzles of the intellectual landscape: Why are some countries rich and others poor? How important are political systems to economics? How do political forces affect economic performance?

Feng as landscapist attempts an ambitious work. He succeeds by providing a compendium of relevant analysis and an extensive collection of original research—including statistical tests of the politics-economics nexus. Despite disparate and diverse subject matter, a coherent picture emerges. Politics affects economics. However, like impressionist landscapes, Feng’s picture is fuzzy. Some details are missing.

The principal findings are straightforward. The umbrella conclusion is that political instability and policy uncertainty adversely affect economic growth. Democracy does not affect economic growth directly but does increase economic growth indirectly by reducing political instability and policy uncertainty and by enhancing other variables linked more directly to growth—birth rates, education, investment, and economic freedom. Moreover, Feng provides evidence against some putative dysfunctional effects commonly attributed to democracy. For example, democracy does not generate more inflation than autocracy does.

Feng makes two especially notable contributions that reflect his creativity and scholarship, add to our understanding of economic performance, and thus enrich important debates in economics and political science. The first contribution links political stability and economic growth. Feng uses regression analysis to estimate the probability of irregular regime changes; then the estimated probabilities to measure political instability; and finally instability and policy uncertainty (approximated by income-distribution measures), along with a number of well-established control variables in cross-country growth equations, to show that political instability and policy uncertainty reduce economic growth.

It is both noteworthy and praiseworthy that Feng does not limit his analysis to statistical tests. He also examines anomalies and case studies in which the evidence does not fit the general statistical pattern. For example, Singapore is long on economic freedom and short on political freedom, but, contrary to the general pattern, flourishes—the “Singapore paradox.”

Feng also addresses tricky issues related to path dependence in transitional nation-states in the post-Soviet era and the impoverished lock-in for much of sub-Saharan Africa. He considers neither case exclusively by purely statistical means. He provides nuanced facts consistent with his story about stability and democracy. His arguments are certainly plausible.

The book’s limitations are less straightforward. Given the large number of statistical tests and the fact that Feng builds on substantial existing research in economics, political science, and sociology, coherence sometimes gets short shrift. Building on previous research tends to diminish the role of formal theory and circumscribes the nature of the tests. Although Feng initially does some formal modeling, his empiricism dominates the book.

The book’s simplest important limitation is its halcyon picture of the democratic polity. The logical conclusion of Feng’s evidence and his interpretation is that democracy is boundless. This flaw has two dimensions. One is more a matter of style. Feng clearly reveres democracy and the open society we associate with civil societies. Consider, for example, his documentation of the nexus between democracy and educational attainment. He notes, “A democracy with little prospect of regime change fosters the spirit of learning among all children through the principle of equal opportunity and inspires scientific breakthroughs buttressed by academic freedom” (p. 211). It is difficult to suppose that Feng has watched children on a playground during school recess. There must be at least a few children, perhaps little boys, for whom democracy is not a sufficient condition for the absorption of the spirit of learning, at least learning all day long.

A second dimension of this roseate view of democracy is that Feng gives models of public choice short shrift in the analysis. The term rent seeking does not appear. Everything apparently works out in democracy. Is democracy effective because it limits rent seeking, or is rent seeking worse under autocratic regimes? In a book of 322 pages of text and tables, some attention to the dominant research streams of public choice seems warranted.

Other limitations exist as well. The strong inferences Feng draws from his tests are not always clearly warranted. He does take pains to avoid “endogeneity problems”—treating variables as causes when they are really effects. For example, he uses predetermined rather than contemporaneous values of potentially troublesome variables such as gross domestic product. His approach is appropriate and logical, but it does not preclude all estimation problems. The data are open to a wide range of possible objections, many having to do with potentially omitted variables.

Consider human-capital attainment. Like many other distinguished economists, Robert E. Lucas Jr. has argued that human capital drives growth. (“On the Mechanics of Economic Development,” Journal of Monetary Economics 22 [1988]: 3–42). Lucas, however, makes a unique argument by noting that urbanization enhances the beneficial properties of education because one person’s productivity enhancements from human capital enhance the productivity of other people’s human capital. In short, human capital generates important spillovers in urban environments. So urbanization renders human capital more valuable, and we should thus observe more human-capital accumulation in more urbanized countries. However, Feng’s estimates of the relationship between democracy and human-capital attainment do not include measures of urbanization, and this omission may bias his results. Although he includes numerous control variables in most of his estimates, the absence of some important variables must raise caution regarding the strength of his conclusions.

The problem of omitted variables is related to a more imposing problem. Feng documents many goods things that stem from political stability, policy certainty, and liberal democracy. Some of these results may be tainted by omitting important variables, such as urbanization. That judgment, however, understates potential problems with the nexus of democracy and economic well-being. Other variables—economic freedom, the rule of law, common-law origins, and private-property rights may well have direct affects on the beneficial outcomes that Feng examines. His estimates of the benefits of democracy may be biased. More important, democracy may be capturing the effects of other fundamental variables—culture, ethnicity, ethnic conflict, religion, and others. Lucas refers to the mysterious economic force as the “X factor.” Despite the impressive array of statistical tests Feng offers, there is no basis in the data to conclude that these measures have isolated the ultimate X factor. Polities and other human aggregations are complex. To be sure, Feng shows that political institutions affect economic institutions and performances in profound ways both directly and indirectly. Moreover, he notes that countries with particular kinds of cultural backgrounds have high thresholds for democracy. However, the complexities of human behavior and organization pose inherent limits on our understanding of them. Democracy seems to add value to life in measurable and identifiable ways, but the full measure of that value remains unclear, and we are left with a bigger puzzle: Why isn’t the whole world democratic?

A more subtle limitation of the book pertains to the interpretation of the statistical measures. Feng makes much of the meaning of democracy. He emphasizes tests of the value of liberal democracy—an object of intrinsic value linked to civil liberties, as opposed to the more mechanical, narrower view of democracy identified by Schumpeter. Feng at times plays down Schumpeter’s version of democracy. Yet much of his empirical analysis uses regular elections grounded in constitutional procedures as a measure of political stability, which is close to the Schumpeterian concept. Other analysis documents the benefits of liberal democracy—largely unfettered civil liberties.

Other versions of democracy also exist. In Law, Pragmatism, and Democracy (Cambridge, Mass.: Harvard University Press, 2003), Richard A. Posner labels these versions as Concept 1 democracy, in contrast to the Schumpeterian Concept 2 democracy. Concept 1 democracy stresses an informed citizenry and, paradoxically, delegation of power to the bureaucracy and the judiciary. Feng does not consider whether his liberal democracy eventually evolves toward the Concept 1 type. For example, would a powerful “green” bureaucracy that strictly controls environmental policy enhance economic growth? I think not. Would it enhance civil liberties? Perhaps it would not. Arnold Zellner, one of the world’s great econometricians, argues that theories should be tested in the extreme (Basic Issues in Econometrics [Chicago: University of Chicago Press, 1984]).Given the numerous arguments raised through the years about the costs of democracy, some attention to its putative downsides for the most extreme cases would seem to merit attention.

In summary, Feng has written a useful and stimulating book that should be read by a wide range of scholars. Readers who make the effort to scrutinize its text, tests, and tables will be rewarded with noteworthy empirical results and a basis for thoughtful future analysis. The breadth and complexity of the subject matter, however, call for judicious interpretation and reflection.