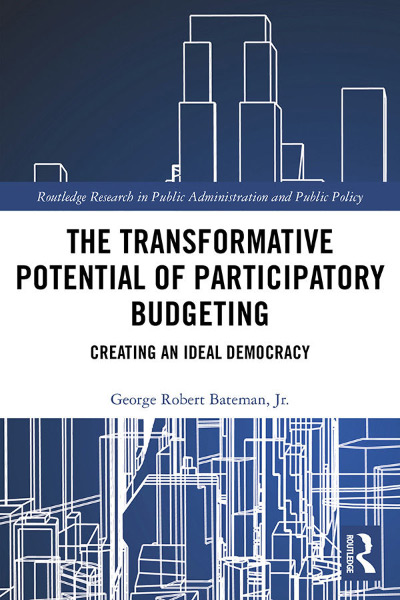 The Transformative Potential of Participatory Budgeting
Creating an Ideal Democracy
By George Robert Bateman Jr.
Kindle Hardcover Paperback
This book review is a web exclusive for the Fall 2021 issue of The Independent Review.

There are core economic dilemmas that democratic societies must address. Near the top of the list are the provision of public goods and private goods with positive externalities. For both, the concern is that the marginal private benefits generated from the goods and services experienced by the individual in the decision-making position fall short of the social (i.e., collective or aggregate) marginal benefits enjoyed. Introductory economics tells us that there will be an underprovision of such goods. Therefore, a fundamental question in public economics is how to devise governance institutions to remedy this shortcoming.

The ancient Greeks, who gave us the word democracy, adopted decentralized procedures to address the collective action problem. In Athens, by the classical period, city administrators maintained a list of the wealthiest families. Each was asked, on a rotational basis, to cover the expenses of public good. Known as leitourgountes (those who provide the “liturgy”), each was called upon to cover the expense of one particular public festival, theatrical play, or choral performance (see Bryan McCannon. 2017. “Who Pay Taxes? Liturgies and the Antidosis Procedure in Ancient Athens.” Constitutional Political Economy 28(4): 407–21). The leitourgia could, instead, be the assignment to one military ship, known as a trierach, for the year covering the expenses such as the salary of the crew and maintenance expenses.

Modern democracies have settled on a centralized system where members of the society are taxed and the resulting revenue is allocated either directly by individuals elected by the voters or indirectly by bureaucrats selected by elected officials. Regardless, the spending of the public funds is organized into a budget where more valued goods and services receive funding while less valued goods go unsupplied.

In the opening chapters, Bateman provides a description of how the mechanism functions and provides a conceptual framework to appreciate its benefits. Participatory budgeting is a broad term used for local direct democracy mechanisms where members of a community choose how to allocate public funds, rather than rely on elected officials or their bureaucratic agents. For example, a municipal government can set aside a pre-specified amount of money. Residents can make proposals on what to spend the money on and the set of ideas submitted is subject to a community vote. Bateman assigns participatory budgeting’s origins to the Port Huron Statement of the Students for a Democratic Society (1962), with its first implementation in Brazil in 1989. While the case study focus throughout the work is on the idea’s implementation in Porto Alegre, Brazil, references to more recent experiences, such as in New York City, are also used.

The book does not collect and analyze data on the impact of adopting participatory budgeting on which publicly-provided goods and services gain and lose support. It does not address secondary consequences such as the impact on tax burdens, firm and population relocation, or public debts incurred. Instead, the book acts as an introduction to Heterodox Economics applied to municipality-level public policy. The conceptual framework outlined in Chapter 2 merges heterodox arguments such as social provisioning, which intends to “draw attention away from images of pecuniary pursuits and individual competition, and towards notions of sustenance, cooperation, and support” (p. 28), with philosophical arguments made by John Dewey, Thorstein Veblen, Henry David Thoreau, and Ralph Waldo Emerson. The later portions of the book deal with each of these thinkers, and how their arguments apply to participatory budgeting.

The distinctions between mainstream economics and heterodox economics is rather clear from the arguments within the book. Using Gary Becker’s arguments in his Nobel Prize lecture (1993, “Nobel Lecture: The Economic Way of Looking at Behavior,” Journal of Political Economy 101(3): 385–409), mainstream economics is built upon the foundational assumptions of static preferences and utility maximization. Bateman argues extensively that participatory budgeting will “provoke self-reflection” (p. 17) and will help “people to develop their morality” (p. 40). By forcing individuals into a collective action situation, preferences will adjust. In essence, rather than think of an institution’s rules interacting with the decision maker’s preferences to generate behaviors and outcomes, the argument throughout the book is that preferences are endogenous and that this mechanism will create better people. This leads the author to claim that “there is no real conflict between individuals’ interests and communities’ interests” (p. 40). Stated explicitly, “the hypothesis of this monograph is that as PB processes become more deliberative, more empowering, and greatly expanded the more participants will experience public happiness, greater understanding of others, greater development of morality, and an increased sense of belonging” (p. 65).

Chapters 4 through 7 explore this hypothesis by discussing public happiness (chapter 4), increasing understanding of others (chapter 5), individual and community morality (chapter 6), and a sense of belonging (chapter 7).

What the monograph lacks is an analysis of the public economics and public choice dimensions. For example, due to nontrivial opportunity costs and low probability of being influential at the margin, voter participation—especially voter participation in municipal elections—is notoriously low. Who will be those motivated to engage in participatory budgeting? Will the choices of those motivated to participate match the median citizen’s preference? Interesting research has shown that something as simple as whether municipal elections coincide with higher office elections, which dramatically affects voter participation, has important incentive effects on special interest groups and, ultimately public spending. A great example of this is the work by Sarah Anzia (2011. “Election Timing and Electoral Influence of Interest Groups.” Journal of Politics 73(2): 412–27), who shows in California that municipalities whose elections occur off cycle have 3% higher teacher salaries since school teachers are a dominant special interest group. Participatory budgeting likely involves a non-representative sample of the population and special interest groups that will lead to expenditures preferred by those who find participating worthwhile. Given that the author has investigated the participatory budgeting procedures used in New York in depth, not complementing the conceptual discussion with a data analysis seems to be a missed opportunity.

The book should be tantalizing to a behavioral economist. A small but interesting literature explores how experience transforms individual decision making. John List’s (2003. “Does Market Experience Eliminate Market Anomalies?” Quarterly Journal of Economics 118(1): 41–71) research on the mitigation of the endowment effect with experience trading in markets is one such example. Bateman makes numerous arguments in this book regarding how group decision-making exercises should influence the participants’ pro-sociality. Laboratory research in experimental economics has well-established measurement tools to assess pro-social behavior and various forms of other-regarding preferences. In fact, interesting work has applied these frequently used economic games in the field to assess how one’s environment influences pro-sociality. A prominent example of this is Samuel Whitt and Rick Wilson’s (2007. “Public Goods in the Field: Katrina Evacuees in Houston.” Southern Economic Journal 74(2): 377–87), research measuring heightened pro-sociality of Hurricane Katrina evacuees. A researcher interested in how political institutions affect pro-sociality will find numerous testable hypotheses reasoned out rather thoroughly in this monograph.

Recent events have brought local public financing to the forefront of American’s policy interest. Movements such as defunding the police have citizens thinking more about how their city and county spends the public’s funds. According to the Participatory Budgeting Project, a nonprofit advocacy group, there are 765 municipalities in North America which incorporate some degree of participatory budgeting. Major U.S. cities such as Boston, New York, Chicago, Seattle, San Francisco, and Los Angeles have found ways to adopt such mechanisms into their public financing. Empirical research and insights from public choice are needed to complement the arguments made in The Transformative Potential of Participatory Budgeting to appreciate the consequences of this new institution.