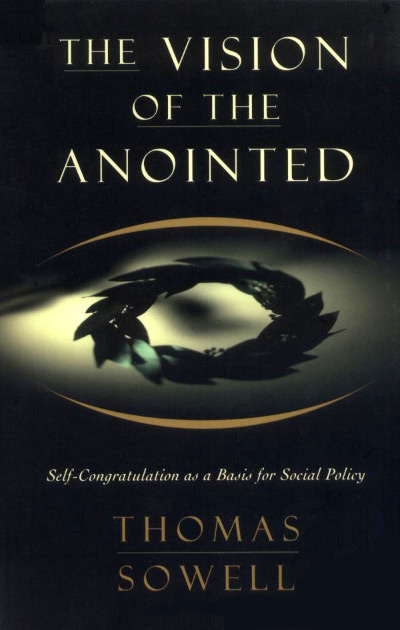 The Vision of the Anointed
Self-Congratulation as a Basis for Social Policy
Thomas Sowell
Kindle Hardcover Paperback Audio CD MP3 CD
This book review appeared in the Spring 1996 issue of The Independent Review.

The idea that humanity can be analyzed into two major competing groups has stimulated many types of social theory. Marxist theory has occupied itself with the conflict between capitalists and proletarians. Certain kinds of modern-liberal theory have attempted to elucidate relationships between a managerial class and the populace that it tries to manage. Classical-liberal and conservative theories have focused on the conflict between people who produce wealth (whether these be considered capitalists or workers) and people who govern but do not produce.

In The Vision of the Anointed, the distinguished economist and social theorist Thomas Sowell makes an important contribution to classical-liberal and conservative thought by scrutinizing the ways in which a self-consciously elite, or “anointed,” group uses ideas to maintain its power in American political life. Sowell regards American political discourse as dominated by people who are sure that they know what is good for society and who think that the good must be attained by expanded government action. This modern-liberal elite exerts its influence through institutions that live by words: the universities and public schools, the media, the liberal clergy, the bar and bench. Its dominance results from its command of the information that words convey and the attitudes that words inspire.

People who live by words should live also by arguments, butas Sowell richly documentsthe modern-liberal elite is not so good at arguing as it is at finding substitutes for argument. Sowell analyzes the major substitutes. Suppose that you doubt the necessity or usefulness of some great new government program. You may first be presented with a quantity of decontextualized “facts” and abused statistics, all indicating the existence of a “crisis” that only government can resolve. If you are not converted by this show of evidence, an attempt will probably be made to shift the viewpoint: outsiders may doubt that there is a crisis of, say, homelessness, but “spokesmen for the homeless” purportedly have no doubts.

There may also be an attempt simply to declare victory by relabeling current political proposals as inherent rights: it will be announced, in vague yet dogmatic terms, that everyone has a right to decent housing and that government is therefore compelled to provide it. If necessary, substantiation for this new right can be discovered in a Constitution that means whatever the latest school of jurists decides that it means.

If even these methods fail to win you over, attention will be redirected from the political issue to your own failure of imagination or morality. It will be insinuated that people like you are simplistic or perversely opposed to change, lacking in compassion and allied with the “forces of greed.” (As Sowell observes, it is always the payers rather than the spenders of taxes who are considered vulnerable to the charge of greed.)

Perhaps the most potent of all the “tactics in lieu of arguments” that Sowell studies is the practice of assessing political programs by their supposed moral intention instead of their visible effect. Thus, a “poverty program” can always be justified by its compassionate motive, even if it turns out to have a disastrous impact on the poor. The opponents of such programs can be blamed for their hard-heartedness.

These are the kinds of argumentative fallacies that occupy a crucial place, as Sowell shows, in the discourse of influential modern-liberals. Reviewing his evidence, one naturally thinks of the old question from Jeremy Bentham’s Book of Fallacies: Is it credible that the “inanity and absurdity” of such arguments “should not be fully manifest to those persons who employ them”? In other words, how can people who argue like this possibly be sincere? Sowell’s answer is precise and compelling: “People are never more sincere than when they assume their own moral superiority” (p. 3).

Power, it might be added, is a mighty aid to this kind of sincerity. The vision of the anointed requires that vastly enlarged powers be given to social planners, economic policymakers, moral educators, and implementers of newly devised constitutional mandates. These powers will be exercised by people who share the anointed’s ideological assumptions and modes of political action. The mutual reinforcements of ideology, political position, and habits of common work are sufficient to constitute a governing class.

The anointed’s ideology, however, functions better as a social bond than as an intellectual tool. An intellectually useful social theory, as Sowell indicates, must have a mechanism that allows it to

adjust to evidence, to come back into line with the facts. One theory may be more plausible, or even more sound, than another, but if it is also more dogmatic, then that can make it far more dangerous than a theory that is not initially as close to the truth but which is more capable of adjusting to feedback from the real world. (p. 7)

But Sowell’s analysis of the past thirty years of modern-liberal ideasdistinguished, as they are, by a pious faith in the efficacy of government and a mordant skepticism about the benefits of spontaneous, free-market processesshows that in this case feedback mechanisms are either feeble or nonexistent. The mountainous evidence for the failure of modern-liberal experiments would startle any disinterested observer. Yet this evidence convinces few of the experimenters that something could be structurally wrong with their theories.

As a free-market economist, Sowell is interested in identifying the incentives that intelligent people have for indulging and reproducing a vision that has lost its connection with reality. “What,” he asks, “does the vision offer that reality does not offer?” (p. 2). His response is suggested by the vision’s emphasis on moral dispositions:

What a vision may offer, and what the prevailing vision of our time emphatically does offer, is a special state of grace for those who believe in it. Those who accept this vision are deemed to be not merely factually correct but morally on a higher plane.For those who have this vision of the world, the anointed and the benighted do not argue on the same moral plane or play by the same cold rules of logic and evidence. (p 3)

Sowell’s approach to what Marxists call the sociology of knowledge complements that of Friedrich Hayek, who in The Road to Serfdom (Chicago: University of Chicago Press, 1976 [1944], pp. 136, ii) showed how “high moral motives” blinded “the socialists of all parties” to the defects in their plans for social engineering. Another analogue to Sowell’s approach is that of Isabel Paterson, who in The God of the Machine (New Brunswick: Transaction Publishers, 1993 [1943], p. 242) showed how modern humanitarians’ conception of themselves impelled them to advocate “the use of the political power in its fullest extension.”

Sowell’s more distant intellectual ancestors include Edmund Burke and other critics of the French Revolution. Burke, whom Sowell quotes to good effect, reproved radical liberals of his time for assuming that they, or anyone else, could know enough about society to remoldit nearer to their hearts’ desire. Sowell traces the intellectual ancestry of today’s anointed to such eighteenth-century worthies as Jean-Jacques Rousseau and William Godwin, men who trusted themselves to devise a new and improved mankind.

To the vision of the anointed, Sowell opposes “the tragic vision” that he shares with Burke. The distinctions that Sowell draws between the two visions are numerous, accurate, and intellectually provocative. The tragic vision is “tragic” because it recognizes that this is a world of limited options, a world in which all the anointed’s proposed solutions to social problems impose their own inescapable costs. The tragic vision treats these costs as crucial, not merely incidental. It therefore inclines to caution. It encourages people to make incremental, not categorical, decisionsto safeguard, for example, the processes that can reduce poverty, rather than to decree that poverty must simply be abolished. The tragic vision favors the provision of practical incentives rather than attempts at the reform of dispositions. It relies not on the deliberate social planning of the few, but on the diffusion of decision-making processes throughout the social system. It regards limitations on power as both necessary and healthy.

By Sowell’s account, the tragic vision offers a much better chance for progress than the feckless optimism of the anointed. In certain respects, “tragic” would actually be a better word for the anointed’s own vision. Among that vision’s potentially tragic flaws is the classic vice of arrogance. About one thing the anointed are decidedly unoptimisticthe possibility that anyone else could get anywhere without their leadership. Their vision is, however, increasingly vulnerable to the disappointments of the people who have invested in it, people who must pay a steadily increasing intellectual price to preserve their confidence against concrete evidence of the vision’s flaws.

With this in mind, one regrets that Sowell has ended his book where he has. He brilliantly analyzes the ideas of the anointed, but he does not provide a comparably substantial account of the processes that can cause those ideas to be reexamined and replaced by better ones. Sowell is superbly qualified to explore that subject. One hopes that he plans to do so in an early sequel to his current book.