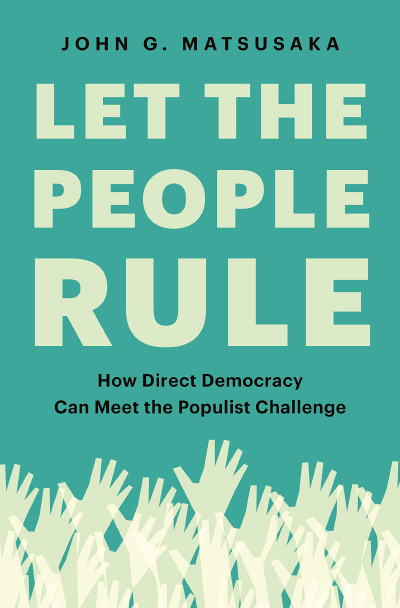 The resurgence of populism in recent years has generated a great deal of attention from academics and the media. Much of the discussion focuses on the potential explanations for the growing dissatisfaction with the political establishment and the impact of populism on democracies. Let the People Rule: How Direct Democracy Can Meet the Populist Challenge takes a somewhat different approach, instead acknowledging the populist view that government has increasingly drifted out of the hands of the people. John Matsusaka uses his extensive research experience regarding direct democracy to recommend a national referendum process in the United States to allow voters to participate directly in making important government decisions in order to counter democratic drift.

Matsusaka begins by reviewing history and data to explain the disconnect between voters and the federal government through the growth of the administrative state and the increasing influence of judicial decision making. He explains the administrative state’s increased role as an attempt to deal with the complexities of government by delegating tasks to experts. Judges’ influence has grown for similar reasons but also to address modern issues related to the U.S. Constitution. Matsusaka additionally recognizes that technocrats may seek to expand their influence to further their own interests. The inability or unwillingness of Congress to make difficult decisions also further shifts power away from elected representatives. Administrative policies and judicial rulings may not align with the preferences of voters because bureaucrats and many judges are unelected, tend to have educational backgrounds that differ substantially from the public, and may be biased. Matsusaka also presents evidence that elected representatives do not necessarily reflect voters’ preferences either.

Although some have recommended reforms to the current system to address democratic drift, Matsusaka is not confident that outcomes can be aligned with voters’ preferences by policy makers simply doing a better job of understanding the people’s concerns. He notes that the independence of agencies, the existence of permanent technocrat civil servants, and the unlikelihood that the president has the time or knowledge to truly oversee agencies make it unlikely that the people have any real control over agencies. The influence of the judicial system does not seem likely to change, either, given the shift in rule making from Congress to the courts. Finally, although proposals regarding electoral competition and campaign finance aim to improve representative performance, Matsusaka presents evidence to suggest that election reforms are unlikely to address democratic drift as legislators generally vote based on ideology.

Matsusaka traces this anomaly to the views of the Founders of the U.S. Constitution, who, he argues, developed a negative opinion of direct democracy based on their experience with democracy at the time and their interpretation of the Greek and Roman democracies. The level of education and speed at which information moved at the time resulted in substantial challenges for direct democracy as well. However, Matsusaka argues that the Founders misinterpreted the historical impact of direct democracy and that the pragmatic concerns of the late 1700s no longer apply. He views direct democracy as a “logical continuation of a long-term pattern of innovation in the country’s democratic practices” (p. 109). He offers numerous examples of the expansion of democracy in the United States over time to help make the case.

The remainder of the book is devoted to assessing the advantages and challenges associated with direct democracy and to offering guidance on the design of an effective direct-democracy process. He compares the outcome of California’s Proposition 13 in 1978 to the outcome of the U.K. Brexit vote in 2020 to highlight the potential for direct democracy both to improve outcomes and to create challenges depending on the framework. Although both were controversial, Proposition 13 involved a very specific question on limiting real estate taxes that was approved by a large majority of voters and voter turnout for the ballot measure was relatively high, ultimately better aligning policy with voter preferences. Conversely, Brexit entailed a major policy shift where a narrow majority voted to leave the European Union without an exit strategy included in the proposal language.

Although case studies provide insight, Matsusaka is careful to utilize empirical evidence to assess three key challenges to direct democracy. First, are voters capable of making critical decisions through direct democracy? Matsusaka acknowledges rational ignorance, but he argues that voters can nonetheless vote in their own interests by taking cues from experts, by utilizing the wisdom of crowds, and by taking time to reflect on alternative views. The influence of interest groups in direct democracy is a second major concern. Examining 2,609 initiatives in states from 1904 through 2018, Matsusaka codes each initiative to identify those related to businesses and analyzes the impact on specific industries. He finds that most initiatives are antibusiness and just 4 percent of the proposals that passed benefited businesses. Although business fared slightly better with legislative proposals listed on state ballots from 1980 to 2018, only 16 percent of accepted proposals benefited business. Business spending in direct democracy is often defensive, and the data suggest that spending does not guarantee success.

The impact of direct democracy on minorities is the third primary threat examined. Matsusaka is more cautious in his defense of this concern because data are lacking and examples of antiminority outcomes exist. Relying again on data from the states, Matsusaka shows that a little less than 2 percent of the 2,609 state initiatives he analyzed proposed antiminority policies. Thirty-one of these antiminority proposals passed, and courts eventually overturned twenty. Matsusaka concludes that although there is a threat to minorities, constitutional protections and elected-representative oversight apply to most of the potential direct-democracy reforms, and similar protections of minority groups exist in both direct and representative democracy. In addition, numerous examples throughout U.S. history highlight the failure of representative democracy to protect minority rights. Regardless, Matsusaka is correct to take direct democracy’s potential threat to minorities seriously. The literature has identified examples where direct democracy has affected minority rights (see, for instance, Daniel Lewis, Direct Democracy and Minority Rights: A Critical Assessment of the Tyranny of the Majority in the American States [New York: Routledge, 2012]).

In addition to the analysis of potential threats, Matsusaka outlines the benefits associated with direct democracy and offers guidance on best practices based on his research. He is careful to note that a poorly designed referendum process may cause more harm than good. Matsusaka outlines six potential options to establish direct democracy at the national level in the United States and evaluates their feasibility. Advisory referendums called by Congress, advisory referendums called by citizen petition, and advisory referendums required on specific issues are the first three possibilities, listed in order of feasibility. Congress could adopt these options through legislation. Binding referendums required on specific issues, binding referendums called by petition, and constitutional amendments proposed by petition are the remaining possibilities. Each of these procedures would require a constitutional amendment. Matsusaka notes that it likely makes sense to start with advisory referendums called by Congress and then gradually adopt additional modifications, assuming the process delivers results. He also offers specific advice on designing the questions posed to voters, on providing necessary information for voters, on establishing approval procedures for major issues, and on developing the rules governing the petition process.

Matsusaka makes a strong case for considering direct democracy at the national level. However, there are practical concerns because Congress would have to formally agree to permit direct democracy and cede some control of the process. Although these concerns should not deter the exploration of direct democracy at the national level, considering that states have already implemented direct-democracy procedures and a neutral party could oversee the process, they are worth considering. In addition, it is important to note that while direct democracy can help align policies with the views of the majority, conflicts can arise between policies supported by the majority and individual liberties (see, for instance, Randall G. Holcombe, Liberty in Peril: Democracy and Power in American History [Oakland, Calif.: Independent Institute, 2019]). However, it is representative democracy in the United States that has failed to protect individual liberties on numerous occasions throughout history, and direct democracy potentially provides a mechanism to push back against interest-group influence over policy.

Matsusaka succeeds in both taking populists’ stated concerns seriously and providing readers with an opportunity to assess direct democracy through a balanced review. Both academic and general audiences will appreciate his efforts. Matsusaka’s work is timely as well, given the current heightened ideological polarization and the potential for autocrats to seize control in times of crisis (see, for instance, Steven Levitsky and Daniel Ziblatt, How Democracies Die [New York: Crown, 2018]). Matsusaka makes the case that direct democracy offers a potentially viable option to complement representative democracy and to address the populist challenge.