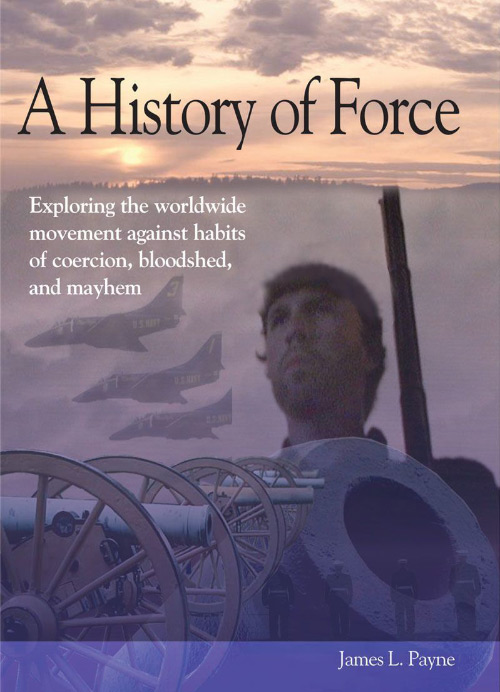 A History of Force
Exploring the Worldwide Movement Against Habits of Coercion, Bloodshed, and Mayhem
James L. Payne
Kindle Paperback
This book review appeared in the Fall 2004 issue of The Independent Review.

We have just emerged from a century that produced some 200 million deaths from wars and genocidal practices. The United States, Israel, India, Pakistan, and various Arab states seem committed at present to what historian Charles Beard called a state of “perpetual war for perpetual peace.” Various “terrorist” groups are taking their disputes to the streets, attacking and killing scores of innocent people. America now leads the industrialized nations in the percentage of its citizens in prison, and the federal government expands its powers to hold suspected “terrorist” supporters, without trials, for extended periods of time. Taxation continues to metastasize itself throughout the world.

In the face of such events, it may be difficult to accept the thesis that force and violence are on the decline. Such, however, is the proposition put forth by political scientist James Payne, whose stated purpose is to undertake what has been largely ignored heretofore by academia: a history of force.

The author carefully defines force as “deliberate physical action against the persons or possessions of another” (p. 20, emphasis in original), thus distinguishing these acts of violence—a term he treats synonymously with force—from such voluntary behavior as marketplace transactions or offensive speech (p. 21).

He suggests that although deadly and vicious violence still prevails in human society, our impressions about the extent of such behavior derive from an overemphasis of the problem by the media, government agencies, and other sources. A greater amount of information about present levels of violence and a lesser awareness of the extent of violence practiced in the past have combined to distort our understanding of the subject (pp. 12–16).

Payne acknowledges that the use of force has fluctuated historically, but he insists that the overall trend is toward a diminution in coercive behavior, whether practiced by institutions or by individuals. “We live in a much more peaceful world than has ever existed,” he informs us, and “the evidence for a decline in the use of force is massive” (p. 7). He presents many statistical comparisons to show that current war and genocide deaths throughout the world are a small fraction of what they were even in the early twentieth century.

Forms of force that once were common to mankind have virtually disappeared: human sacrifice, slavery, and the burning or hanging of witches and heretics no longer prevail in human society. Lynching and rioting are much less frequent than in previous decades and centuries. Murder rates are on the decline. Even the carrying out of the death penalty is slowly disappearing, with many nations abolishing executions altogether.

Payne observes that the practice of eliminating political opponents through acts of murder—once widely accepted in Western nations—has given way to the emergence of democratic methods for the transfer of power. The freedom to criticize political leaders or systems without fear of being exiled or beheaded for treason is more widely accepted, and, perhaps in a causal connection, revolutionary movements have declined.

Payne discusses the amounts of violence in more primitive groups, noting that on a per capita basis, modern political systems are comparatively less deadly than were the societies of our distant ancestors. He comments favorably on the introduction of government, which restricted such earlier practices as “invasion, feuding, and pillaging” (p. 82). Here, perhaps, he confuses form and substance, for when political systems are analyzed closely, it is difficult to ignore their own invasive tendencies, as expressed in Randolph Bourne's classic observation that “war is the health of the state” (War and the Intellectuals [New York: Harper and Row, 1964], p. 71). “Feuding” may simply have been transformed into the more formal competition of political, economic, and social interests for the power of the state, which the winners of the competition use to enforce their will on others. Nor can “pillage” be said to have been reduced by U.S. political agencies that take, through taxation, some 45 percent of the wealth produced each year and exercise broad powers of eminent domain over private property.

That the use of force has not disappeared entirely may be owing, as the author emphasizes, to our often contradictory responses to its use. We want our property protected, but we rationalize the government's forcibly depriving people of their property by means of taxation to accomplish the ends that we value. We strongly disapprove of murder, but we then call on the state to kill those who have committed such acts.

Although readers may have occasional questions and criticisms as they proceed through the book, Payne has gone beyond generalized impressions to put together an impressive, well-documented case on behalf of his thesis. He reports that genocide—once supported by various religions and widely practiced by many political systems—is very much in retreat, even though it is still carried out in a few regions. Public opinion, he argues further, has reached global dimensions of opposition to the mass killing of people.

War, he tells us, is also in decline, as “fewer countries are engaging in war, for shorter periods, and with lower overall casualty rates” (p. 75). Added to this change is a reduction in military conscription and in the relative size of military forces, although one might consider this trend a reflection of the increased employment of technological means of conducting wars—the “weapons of mass destruction” with which we have become familiar of late.

Violence directed against religious and political belief and expression is also in retreat, says Payne. Charges of heresy or treason that used to greet those uttering unacceptable opinions usually ended in the dissident's death—often brutally brought about. The Inquisition, mandatory church attendance, the biblical admonition that “prophets” and “dreamers of dreams” be put to death (p. 221), and other forms of violent religious persecution no longer govern people's inner lives. Likewise, censorship, book burning, and punishment for “seditious libel” are no longer the threats they once were.

Throughout the book, Payne illustrates the interconnected nature of force and political systems. “If you do away with government's use of force,” he tells us, “you haven't got government” (p. 241). Taxation, government regulation of economic activity, zoning, licensing, policing of personal conduct, and so forth are placed alongside the more vicious forms of violence as expressions of the state's dependence on the lawful use of force.

A growing public disrespect for government and politicians and a declining interest in the political process provide Payne with further evidence of the erosion of force as a social tool. He takes note of the well-known phenomenon of a continually diminishing voter turnout in U.S. elections in recent decades (p. 246).

What accounts for this general recession in the sanctioned use of force? Payne attributes the transformation to a combination of economic advancement and the proliferation of information. “When people are richer ... they come to value their own lives, and the lives of others, more highly” (p. 28)—a conclusion that might be difficult to substantiate. At the same time, “the development of communication” has fostered “the creation of a reflective public opinion that can assess and evaluate the role of force” (p. 29). Such factors, he suggests, have helped humanity to move gradually away from force and toward voluntary, persuasive methods of accomplishing desired ends. Recalling Tocqueville's observations on the role of private associations in American life, Payne notes the abundance of voluntary groups in Western nations. Although political systems, grounded in coercion, “promise sweeping reforms” (p. 265) that make them more glamorous to many, voluntary associations tend to be more efficient and effective.

Payne has presented a well-documented and thought-out thesis that might be a good starting point for further research into the various areas he has considered. A more thorough analysis of the causes of the decline in the use of violence would make a useful study by itself. Has a change in thinking moved mankind away from the use of force; and, if so, what has generated such a change?

One question that arises from a reading of this book is whether force, as brutish, physical violence, has only been transformed into more subtle forms of coercion, such as fines, injunctions, and the widespread intrusion of the state into personal lives through electronic and satellite surveillance, the tapping of telephones and computers, and the access to banking, health, and economic transaction records.

Still, that the state has had to disguise its use of force as an iron fist inside a velvet glove may confirm Payne's thesis. This book reminds us of the need to be more skeptical of the “disaster lobby” that is constantly reminding us of the threats that “others” pose to our well-being. Evidence of a continuing decline in the use of force cannot be good news to the practitioners of state power, whose authority depends on a popular perception that the world is dangerous and violent.