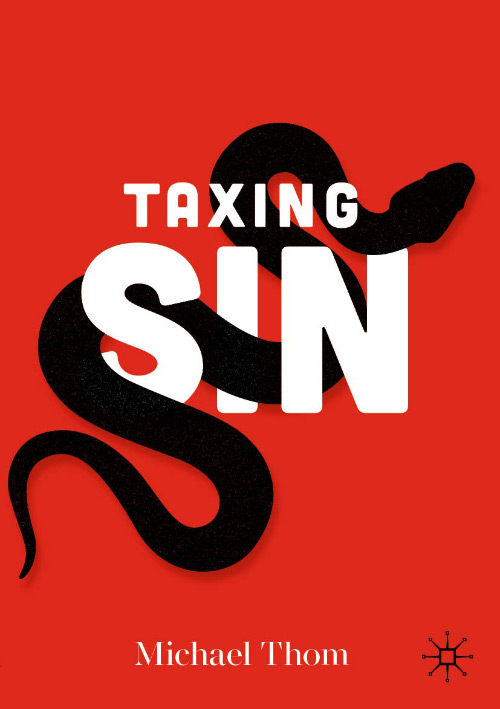 Taxing Sin
By Michael Thom
Kindle Paperback
This book review is a web exclusive for the Fall 2021 issue of The Independent Review.

Michael Thom is a professor of public policy at the University of Southern California. In Taxing Sin, Thom provides a refreshing analysis of sin tax policies that incorporates the public choice perspective. To a reader well-versed in public choice and paternalism, there is not much that is new in this book. The real strength of the book is its ability to dually present the public choice perspective of why sin taxes make poor public policy, while also providing the scientific evidence that supports such a conclusion.

Taxing Sin has seven chapters. The book begins with an introduction to sin taxes, with a brief history of sin tax paternalism that stretches from early sumptuary laws to Pigouvian taxes to modern behaviorists that try to correct cognitive biases. Thom then dedicates one chapter each to an in-depth case study of soda, alcohol, tobacco, and marijuana. In the sixth chapter, “Taxing Twenty-First Century Sins,” Thom looks ahead to the future of paternalism, specifically policy surrounding the modern sins of eating meat, emitting carbon, using plastic bags, and working with robots. Thom concludes in the final chapter with a simple policy message: don’t tax sin; forgive it.

Each of the main body chapters follow a similar format. Readers are introduced to the history of the sin tax. Thom repeatedly does an excellent job of identifying the Baptist and Bootlegger coalitions that come together to push for the sin taxes to be implemented (and later, increased).

Under the pretense of improving public health, progressives insisted that the government regulate choices they believed were harmful to society, preferably by banning those choices outright. The justification often blended secular and religious values. Choices that secular progressives believed undermined public health (a secular sin) typically aligned with what religious progressives believed undermined spiritual health (a religious sin). Control over individual choices was viewed by each group as a necessity to serve a higher purpose. For progressives, that purpose was advancing the state; for the religious, who were typically Protestant, that purpose was advancing Christianity (p. 7).

Thom then proceeds to discuss the scientific research on the topic and whether the findings from the research support the tax propositions. Not surprisingly, peer-reviewed scientific studies often fail to find a causal link between the promised outcome and a tax or prohibition. Consider the case of soda taxes. Obviously, a tax or ban on soda will decrease consumption. Conventional wisdom says that decreased soda consumption should decrease weight and obesity. But does it?

In fact, a growing body of research contradicts that conventional wisdom. In one review of studies on the relationship between soda and obesity, more than two-thirds reported no evidence that the former affects the latter. Another review of the research stated that the association between soda and obesity was “near zero” among children and adolescents. An analysis of diets over five years likewise found “no association between sugar-sweetened beverage consumption, juice consumption, and adolescent weight gain.” Based on that evidence, it is no wonder that the authors of yet another study concluded that reducing beverage consumption would not reduce obesity (p. 28).

And for proposed meat taxes,

Considering all the available evidence, there is little reason to believe that meat consumption is significantly harmful to the environment or to public health, or that the benefits of a meat tax outweigh its costs and unintended consequences. Meat is another sin that does not need forgiving (p. 160).

Thom concludes each chapter by reminding the reader of the book’s central claims. Sin taxes cannot pass scientific examination as tools that improve public well-being. These taxes are tools facilitated by often unexpected political coalitions that can be used to control behavior and create government revenue.

The evidence on soda paternalism—from the interest groups that support it to the experts that produce the social science to justify it—suggests that its real motive is not necessarily to improve public health, but to increase government revenue and broaden the scope of its influence over individual choice (p. 44–45).

Thom even lays out the arguments why so many lay readers seem to conclude that the scientific arguments are settled on “sin products.”

Experts championed soda paternalism in academic journals. One expert wrote a book about “taking on big soda.” Three others argued in a Los Angeles Times column that a tax could save “millions of lives.” ... Media coverage largely agreed with the experts. One study found that pro-soda tax arguments in news stories outnumbered anti-tax arguments by a margin of over two-to-one. According to another survey, major media outlets in the United Kingdom published 930 stories about the merits of soda taxes in one year alone compared to only 182 stories on portion control (p. 24 – 25).

Even most students who leave a principles-level economics course hear only of Pigouvian “corrective” taxes. Government failure doesn’t make the syllabus. Taxing Sin could offer a valuable supplement to those students.

Taxing Sin provides repeated examples and analysis for the traditional arguments against paternalism and sin taxes as effective and efficient public policy tools. Government is made up of individual politicians who pursue their own self-interests, have limited knowledge, and suffer from the same “biases” as the populous whose outcomes they try to change through public policy. Selective taxes are a bludgeon of a policy tool, which tend to do a poor job of achieving their promised goal (e.g., decreasing obesity via soda taxes), though they are quite effective at generating revenue. And, each tax and prohibition generates a myriad of unintended consequences, sometimes creating problems that were worse than the previous status quo.

Overall, I enjoyed reading the book. The best audience for Taxing Sin, in my opinion, are readers that are fairly new to public choice and that don’t mind a few history lessons. In those hands, Taxing Sin may have a serious impact. The book would be great for an undergraduate reading group or excerpts of the book would be great to stimulate a debate on the efficacy of sin taxes. To any reader, the book encourages critical thinking and evaluating policy from the public choice perspective.