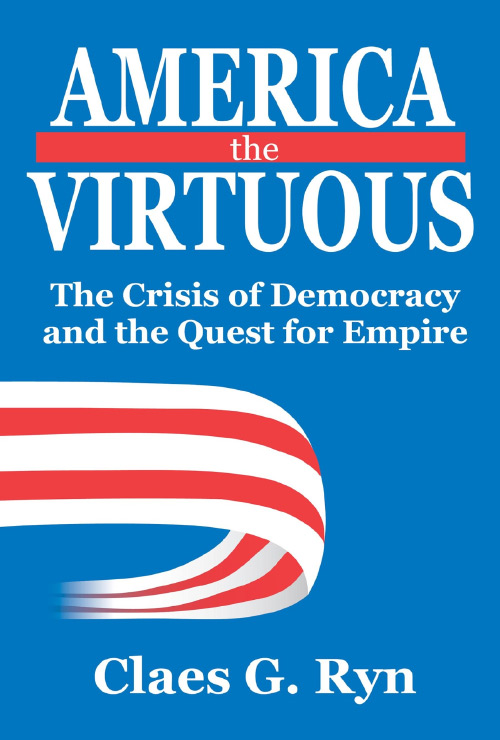 America the Virtuous
The Crisis of Democracy and the Quest for Empire
Claes G. Ryn
Kindle Hardcover Paperback
This book review appeared in the Winter 2005/06 issue of The Independent Review.

Near the end of the eighteenth century, a democratic tide swept across France, overthrowing the established aristocratic order. The events in France in 1789 thrilled some international observers and shocked many others. Among the leading critics was Edmund Burke. Within a few years, when a band of ideological zealots known as the Jacobins launched the Terror in France, Burke’s warnings of the collapse of the social order seemed eerily prescient.

Claes Ryn, a professor of politics at Catholic University, carries on in the Burkean tradition. “In the second half of the twentieth century,” he explains in the introduction to his book America the Virtuous, “a distinctively American form of Jacobinism evolved....rhetorically dedicated to doing good for the world but....fundamentally motivated by a will to dominate” (p. 3). That development is by now an all too familiar tale. Ryn’s contribution to the discussion of the ideological origins of U.S. foreign policy is unique in that he approaches the question from the perspective of an unreconstructed conservative. As an expert on Jacobinism, he is effective—occasionally brilliant—in explaining why the philosophy is dangerous. He fails to account for why so few people understand its dangers.

If Ryn fails in this regard, however, he does so not for lack of trying. In his telling, the rise of neo-Jacobinism is related to the general decline of Western civilization, a decline hastened by democracy’s expansion. Reversing the decay of the moral order can be effected only by a turn away from democracy and toward aristocracy. Although Burke would understand and relate to this proposal, few modern readers will.

Ryn strives to delineate the parameters of neo-Jacobinism without naming names. “The new Jacobinism is not a movement with settled boundaries, definite membership or precise, generally agreed-upon ideological definition,” he explains (p. 24). Accordingly, it is a slippery concept, and a label easy to reject, even for those who might subscribe to the philosophy. Ryn avoids an analysis of particular writers, arguing instead that his aim is “to identify, illustrate, and analyze a general ideological phenomenon, a powerful tendency of thought” (p. 39, emphasis in original). “To decide precisely who is and who is not a fully-fledged representative of this ideology” is relatively unimportant (p. 139). A precise identification, however, really is important. Identifying a “powerful tendency” is not good enough, not clear enough, especially when this philosophy’s adherents claim to represent the majority’s wishes.

Ryn does succeed in explaining what neo-Jacobinism is not. It is not neoconservativism per se, but it most certainly is not conservativism. Its most unconservative aspect is its lack of humility. Indeed, when William Bennett extolled dozens of virtues in his best-selling book several years ago, humility was conspicuously absent. For Ryn, Western civilization rests on humility, an explicit recognition of man’s limited ability to shape the world. Greek culture was infused with cautionary tragedies, plays, and fables that documented the most dangerous of human frailties: hubris. Christianity likewise “regarded pride as the cardinal sin” and extolled the virtues of self-control. By “checking and subduing” man’s will to power, Ryn explains, “civilization at its best has reduced the incidence of self-indulgence, arrogance and belligerence” (p. 3).

The Jacobins of the late eighteenth century, inspired by the writings of Rousseau and other Enlightenment thinkers, expressed a stark alternative to this traditional view; indeed, they repudiated it altogether. Similarly, modern neo-Jacobinism, which Ryn calls the “ideology of virtuous empire,” has taken root “in the most powerful and culturally influential nation of the Western world,” and “ the signs are now everywhere that the will to dominate is breaking free of such traditional restraints” (p. 3).

Neo-Jacobinism is most worrisome in foreign affairs because “it has access to the military, diplomatic and economic might of the only superpower in the world” (p. 37). Gaining such access, according to Ryn, was the goal all along. The neo-Jacobins have attached themselves to the United States “less because they identify with the actual, historically evolved American nation with its ancient origins in the Western past than because they recognize the utility of the might of the United States” (p. 80).

Given that the ideology of virtuous empire stands so much at odds with American traditions and values, opponents of neo-Jacobinism must account for the appeal of these ideas. Equally important, they must craft an alternative strategy, one that safeguards essential security and advances human liberty.

If a central virtue of Western civilization is its humility, then we should expect that neo-Jacobinism (deliberately crafted as a repudiation of Western civilization) will be brought down by its hubris, much as communism collapsed in the last decade of the twentieth century. In the early nineteenth century, Napoleon’s armies, trading on the intellectual capital of the original Jacobins, were turned back by an irregular band of Spanish bandits (for whose fighting the term guerilla warfare was coined) and several years later by the brutal Russian winter and by tens of millions of Russians who were not convinced that the invading armies really intended to “liberate” them. Ostensibly grand and noble goals were fatally undermined by immoral means and, more important, by man’s limitations. Should we expect, then, a similar moment of reckoning for the new Jacobins? Ryn is skeptical. His tirades against modern society’s disorder are pointless, even embarrassing, digressions. For him, “It is hard to avoid the conclusion that civilization is disintegrating, not at the periphery but at the moral core” (p. 102). Although this conclusion is debatable, the discussion might have some value had Ryn connected these supposed trends to the neo-Jacobins. He does not do so.

A counter-evolution, if that is what is really required, will not happen automatically. Interested parties must hold the neo-Jacobins to account when their confident predictions go awry. Making such a demand does not imply “rooting for defeat,” as David Frum and Norman Podhoretz have alleged. It requires having a suitable alternative to empire, virtuous or otherwise, that is consistent with American traditions and values and actually has some prospect of success.

Ryn, for his part, advocates “responsible nationhood,” “a policy of self-restraint and respect for others in the international arena....[a policy that] is cosmopolitan but not globalistic and threatening....patriotic but not closed-in upon itself” (p. 81). The specifics of such a strategy, outlined elsewhere, are eminently sensible, but the core assumption is the most important one: “A country has no reason to interfere militarily or otherwise with other countries except to protect its own vital interests and defend itself against threats” (p. 57). Such an assertion, which not so long ago would have seemed absurdly obvious, is now hotly debated. Many Americans now seem to assume that our right to intervene flows automatically from our moral and intellectual superiority. At the same time, they suppose that our military power will discourage any would-be challengers. Anyone who dares to suggest otherwise is branded unpatriotic or isolationist.

Ryn argues, however, that a policy of “responsible nationhood” would not require the United States to disavow completely a prominent role in foreign affairs. On the contrary, he welcomes some activism. It must, however, be guided by strategy and tempered by realism. “America must defend itself, protect its interests, and shoulder some of the responsibility for the peace and well-being of the world,” Ryn explains, but this strategy must be “based on mature, historically well-informed, subtle thinking and marked by humility” (p. 124).

The strategy the neo-Jacobins advocate satisfies none of these requirements. Ryn marvels, therefore, that otherwise sensible commentators deem “entirely plausible” the neo-Jacobins’ designs—which are an “expression of an inordinate, open-ended, even megalomaniacal desire for power and control” (p. 131).

The challenge, then, is not to explain how these ideas came to the fore or even why they are so dangerous, but rather why they continue to be so popular. Indeed, Ryn concedes that many in the public ask: “Are not the new Jacobins advocating what every red-blooded American believes?”—namely, that American values “should be exported to rest of the world...?” (p. 201). Why do many individuals, even those not of the neo-Jacobin persuasion, believe such unlikely achievements to be possible? What will it take to restore humility to U.S. foreign policy?

One can easily imagine that public opinion will turn after a major American military intervention attributable to neo-Jacobin agitation ends in disaster. But why has that reaction not yet occurred with respect to Iraq? By surviving the electoral contest of 2004, President George W. Bush claimed vindication for his policies, especially his foreign policies. The elections were his “accountability moment,” the president explained. Ryn wonders: “Have Americans become so imbued with utopianism and arrogance that nothing short of some great disaster will awaken a sense of humility and limits? Or are they still capable of heeding the advice of leading figures from their own past?” (p. 206). From our contemporary perspective, we cannot answer such a question, and we should not be surprised that Ryn ultimately fails to do so.

Historians eventually will explain what came of the great experiment to export American values by force of arms. For now, one can only hope that individuals with a more accurate understanding of the Founders’ intentions will ultimately prevail in the great ideological struggle to return the country to its more realistic roots and that this return will occur before Ryn’s “great disaster” strikes.