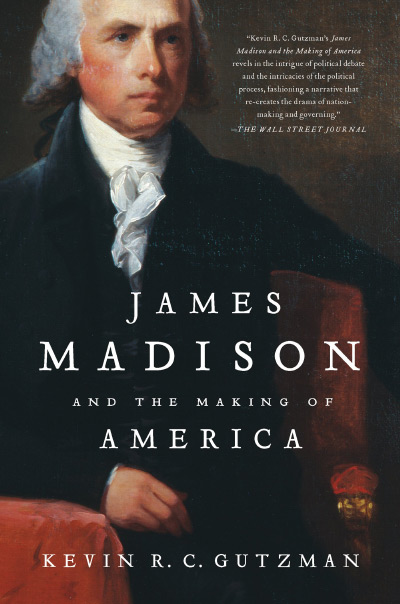 Although James Madison is by no means a forgotten man among America’s founding generation, he is often underappreciated. Much of his work in creating the United States of America was done behind the scenes, and he was often overshadowed by his seemingly more impressive (and invariably much taller) colleagues. The shadow of Jefferson in particular too often leaves Madison less understood than he should be. Kevin R. C. Gutzman’s biography of America’s fourth president aims to shed some additional light on Madison’s crucial role in the early development of the United States.

Madison is best known for his work on the Constitution and the Bill of Rights and for his service as president, but Gutzman finds Madison’s most enduring legacy in his efforts for religious freedom in America. He explores Madison’s efforts to shape the Virginia Declaration of Rights in the state’s constitutional convention; the young delegate “led the way in enshrining full-throated religious libertarianism” (p. 12) in that document, his first substantial success in shaping the American idea of separating church and state. Gutzman’s Madison is first and foremost a champion of personal freedom. That he also owned a plantation worked by slaves was not an inconsistency so much as a nod to practical politics; because complete emancipation was not likely to be achieved, Madison instead fought for liberal policies on manumission.

Madison’s service in his state’s constitutional convention highlights Gutzman’s account of his early life, and his essay Memorial and Remonstrance against Religious Assessments looms large in the story of his career in the 1780s. The theme is religious freedom; Gutzman paints Madison as a sort of religious crusader, though generally a muted one because he was never really the crusading type.

This theme of religious liberty moves to the background during the Philadelphia Convention and the ratification debates, where Madison did not push for explicit protection of religion as he had in the state constitution. This central period in Madison’s career, which (rightfully) spans half of the book, was something of a departure from his early focus on religious liberty. Nonetheless, Gutzman insists that Madison was consistent throughout the debate over the Constitution, finding protection for personal freedom, including religious freedom, in the enumeration of federal powers and an extensive system of checks and balances. Madison’s nationalism played a role here as well, of course, but the importance of national unity and some centralized power was always weighed against the potential danger to individual liberty.

Gutzman’s analysis of Madison’s contributions to The Federalist essays, most of chapter 4, runs long and feels like a disruption in an otherwise smooth narrative. This section adds little to the overall argument that Madison’s primary contribution was to the guarantee of religious freedom because he wrote little on the subject in those essays. It seems odd to suggest that an analysis of The Federalist is not really necessary in a Madison biography, but that is the case here in the only tedious part of an otherwise engaging book. The account of the Virginia ratifying convention in chapter 5 is only slightly more useful to the picture that Gutzman is painting of Madison, but it is much more engaging and more essential to the story. Here we see Madison ready to fight, in perhaps the most impassioned political performance of his career. Gutzman places Madison at the center of the debate; though Patrick Henry dominated the ratifying convention rhetorically, it was Madison who was generally in control of the conversation. Governor Edmund Randolph played a noteworthy role in defending the Constitution despite his earlier objections at the end of the convention, and Gutzman persuasively argues that the governor’s reversal was due primarily to Madison, who also helped shape Randolph’s new position supporting ratification. This convention was to be the high point of Madison’s career, and Virginia’s ratification would remain his most significant contribution to America’s development.

But Madison’s work was not done because Virginia, along with several other states, had recommended that amendments to the Constitution be considered in the first Congress. Madison was elected to that Congress only because he had promised to work for amendments. Here Gutzman finds Madison returning to his focus on liberties as the congressman began work on amendment proposals that were a combination of ideas suggested during the debates over ratification and his own personal concerns. Of particular note was Madison’s effort to insert an amendment protecting individuals against states: “No state shall violate the equal rights of conscience, or the freedom of the press, or the trial by jury in criminal cases” (qtd. on p. 250). The right of conscience, if Madison had his way, would be protected against both federal and state governments. Although this amendment was rejected by the House of Representatives, twelve amendments were eventually proposed and ten ratified as a result of Madison’s insistence that Congress take up the subject.

Gutzman notably devotes only thirty-three pages, less than a tenth of the book, to Madison’s presidency; this seemingly important phase of his career is covered in a single chapter, along with his service as secretary of state (which itself covers about half as many pages as his presidency). Madison’s contributions to the writing and ratification of the Constitution and the Bill of Rights are certainly more important to American political development than his time as president, but the coverage of his presidency still seems awfully short. I suspect there are two reasons for this. First, Madison’s time as president was not especially successful. Madison appears far less impressive as president and even as secretary of state than he does as a congressman. He was far less physically impressive than his predecessors in that office, and he was not a strong public speaker. “Madison was at his best in mastering large bodies of data, in synthesizing extensive bodies of information, in wrestling measures through parliamentary assemblies,” writes Gutzman. “In the earliest days of his administration, however, he failed at precisely such a task” (p. 304). This failure had much to do with Madison’s view of Congress as the leading branch of government and his belief that the president should not interfere in congressional decisions any more than is absolutely necessary (and constitutionally permitted); this view extended as far as the Senate’s decisions to confirm or reject the president’s appointments. Even where Madison clearly had more authority, as in the War of 1812, he “compiled a decidedly mixed record” (p. 318) that helps make this section of the book seem anticlimactic after his distinguished career before 1800.

A second possible reason for the short account of Madison’s presidency is that his term might well be considered an extension of Jefferson’s two terms in office. Madison certainly made no particular effort to break from his predecessor and sometime mentor in his policies or his approach. (Gutzman notes one exception in the form of Dolley Madison and offers a short but fascinating account of her role as “The Presidentess” [pp. 305–6]. More on Dolley would have been a welcome addition here.) Political realities forced Madison, as they had with Jefferson, to reconsider some of his earlier positions on constitutional power, and Madison, like Jefferson, seemed to develop a strong concern for his reputation and legacy. By the end of eight years in office, he “was experiencing wide-ranging buyer’s remorse” over Republican policies and proposing that the government reconsider some Federalist policies from the Washington and Adams administrations, including reauthorizing a national bank (p. 331). By the end of his political career, Madison’s humanity became very clear “in that he wanted to have been consistent even when he had not been” (p. 350). Nonetheless, Gutzman offers a picture of a statesman who was consistent more often than not and who tirelessly worked for individual liberty and against tyranny throughout his career.

It is common for biographers to slip into moments of hagiography, and Madison makes for such an endearing subject. Madison’s role in winning the American Revolution is somewhat overstated, and Gutzman at times seems to give Madison too much credit too soon. Though Madison was instrumental in getting a national convention together at Philadelphia and even in convincing certain delegates (notably George Washington) to attend, these accomplishments were perhaps less heroic and more prosaic than any biographer might portray them. To suggest that credit for The Federalist was “largely Madison’s” (p. 336) goes a bit too far, given that Madison wrote only about one-third of the essays (though that portion did include many of the most impressive among them). Nevertheless, the at times excessive praise of Madison does not get in the way of an otherwise fairly objective account of his admirable but less than perfect political career.

Altogether this biography is impressive, praising Madison without concealing his flaws, explaining his ideas and actions within the context of the times in which he lived, and offering an insightful glimpse into the world of the American founding through the eyes of one of its keenest observers.