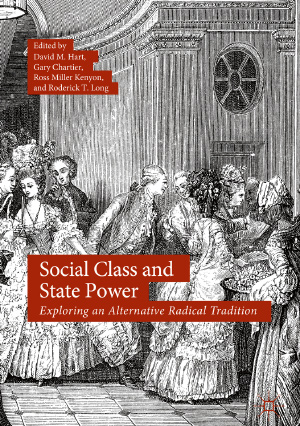 “Class” is a complicated concept. Someone who “has class” may be late to a lecture, but more likely exhibits the admirably qualities of style and personality that we call “classy.” Class may also be a category into which things are “classified,” as the kingdom, phylum, class hierarchy of ordering species.

Sometimes, we say that “class-based”—or not—is a feature of a society. Jane Austen’s novels are replete with concerns about rank, quality, and other measures of social class, of which the characters are aware to varying extents. At one point we are told that Lady Dalrymple was “good company,” but Anne protests:

“My idea of good company, Mr. Elliot, is the company of clever, well-informed people, who have a great deal of conversation; that is what I call good company.”

“You are mistaken,” said he gently, “that is not good company; that is the best. Good company requires only birth, education, and manners, and with regard to education is not very nice. ... Will it not be wiser to accept the society of those good ladies in Laura Place, and enjoy all the advantages of the connexion as far as possible? You may depend upon it, that they will move in the first set in Bath this winter, and as rank is rank, your being known to be related to them will have its use in fixing your family (our family let me say) in that degree of consideration which we must all wish for.” (Jane Austen, Persuasion, p. 130; emphasis added)

The founders of the American republic were in some ways reacting to this notion of rank, which conferred privilege that had nothing to do with merit, when they sought to create a natural aristocracy. They were not rejecting the idea that some people might be better, more virtuous, more energetic, or have greater genius for solving problems. Instead, their notion of natural aristocracy was based on selecting the individual based on his or her own merit, rather than simply and by chance being associated with a family “of quality.”

The word “class” was hijacked, at least as an analytic concept in the social sciences, by Karl Marx. The concept is introduced early in Marx’s work, in The Communist Manifesto (1848), which claimed that there are two “classes,” the bourgeoisie and the proletariat. The bourgeoisie were “owners of the means of social production and employers of wage labor.” The proletariat are said to be “the class of modern wage-laborers who, having no means of production of their own, are reduced to selling their labor-power in order to live.” (Karl Marx and Friedrich Engels, The Communist Manifesto, trans. Samuel Moore. Chicago, 1945, p. 12.)

To be fair, Marx was advancing an interesting and potentially useful argument: the power relations of citizens depend on their sensibilities and lived experiences. Marx said this clearly in 1859: “It is not the consciousness of men that determines their existence, but on the contrary it is their social existence that determines their consciousness” (Critique of Political Economy, 1859, p. ii). In short, Marx was a materialist first, but also a constructivist. The power relations of which class differences are a symptom are socially constructed; the divisions are perfectly real, but they can be modified and changed by a society that has different social relations between individuals and the means of production.

This is not nonsense. It may not be the only reason that socially constructed “class” differences exist, but it is an interesting one. Marx elaborated in Chapter 26 of Book I of Capital:

Primitive accumulation plays in political economy about the same part as original sin in theology. Adam bit the apple, and thereupon sin fell on the human race. Its origin is supposed to be explained when it is told as an anecdote of the past. In times long gone by there were two sorts of people; one, the diligent, intelligent, and, above all, frugal; the other, lazy rascals, spending their substance, and more, in riotous living. ... It came to pass that the former sort accumulated wealth, and the latter sort had at last nothing to sell but their own skins. (Marx, Capital, Volume I, 1983, p. 462)

Marx’s core claim is that this mythology of “primitive accumulation” was not, in actual societies, the primary mechanism by which some groups collected enough capital to own factories, while others remained poor and had to sweat. Rather, the disparities in the distribution of income at the dawn of capitalism were just as likely to result from historical theft, illegitimate government preferences, and wrongly conferred privileges as anything else.

Marx’s mistake was to attribute these differences to market exchange and the commodification of labor. As is often the case, the apparent inequities of market exchange are actually due to pre-existing, and quite possibly illegitimate, disparities in the distribution of wealth and power (Munger, 2011).

The correct definition of class is not one derived always, and only, from the relation of the individual to ownership of the means of production. That may play out as a class difference, but only in a system where cronyistic artificial privileges and monopolies are routinely and reliably conferred on some “capitalists.” The correct definition of “class,” I submit, is this:

Perhaps surprisingly, this simple change, from “ownership of the means of production” to “control over the means of coercion,” immediately rescues class as a key analytic concept for social scientists. Given this, however, it is unsurprising that versions of exactly this notion of class, using coercive power to create and sustain unearned privilege, are threaded throughout the history of classical liberal thought. That, in overly brief form, is the premise of a remarkable new book edited by Hart, Chartier, Kenyon, and Long (henceforth, HCKL).

Because of its Marxist provenance, and particularly its noisome overuse by unreflective followers of Marx, the notion of class is little used in modern classical liberal writing. Or, is it? HCKL suggest that “Classical Liberal Class Analysis” is in fact of considerable historical significance, and can be found at the core of the arguments of many familiar and important classical liberal writers.

The editors provide a helpful, and I think quite accurate, table of correspondence, noting how a wide variety of concepts map into class, properly understood. The number of groups is often two, just as for Marx, but names of the groups are different: the ruling few vs. the subject many, or the plunderers vs. the plundered, or tax-payers vs. tax consumers. Of course there are also authors who simply identify the group that has wrenched privilege, protected by state coercion, into its hands: Molanari’s “budget eaters” or the Levellers’ “caterpillars.” Many of the conceptions of unearned privilege and class are similar, but there are interesting differences. The differences are significant enough for understanding each thinker that it would be useful to have the relevant excerpts near at hand, facilitating the comparison.

That’s what HCKL have done, giving us a reader of thirty-five excerpts and short writings, each with a useful and often quite thoughtful abstract to get us oriented at the outset. The readings are excellent, both diverse intellectually and individually insightful and entertaining. The first, Richard Overton’s 1641 “Monopolists as Frogs and Vermin,” is an amusing forerunner of Frédéric Bastiat’s style of satire, and new to me. There is work here by Thomas Paine, Vicesimus Knox, William Godwin, and Jeremy Bentham, as well as more familiar works. I expected to see Ludwig von Mises’ 1945 “On Castes, Classes, and Group Interests,” and it’s there. I was glad to see William Graham Sumner’s excellent and under read 1883 “The Forgotten Man,” the basis of Amity Shlaes’ book of the same name (The Forgotten Man: A New History of the Great Depression, Harper-Collins, 2007). I had not expected (because I didn’t know about it!) another work by Sumner, “Democracy and Plutocracy,” which I will now be using as a class assignment.

Frankly, just the readings alone, with the abstracts, would make the book a “must buy.” The bonus is that the connecting theme of Classical Liberal Class Analysis serves an important intellectual purpose. And they state their purpose quite clearly; I guess one could say that HCKL disdain to conceal their views and aims:

Our hope is that giving the tradition [of Classical Liberal Class Analysis] a name and introducing it to scholars across a range of perspectives will enable it to grow, to thrive, and to continue contributing to a critical and transformative engagement with power and the defense of human freedom and peaceful social cooperation. (p. xxii)